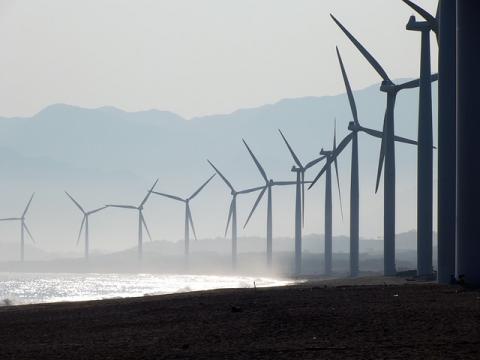 Amid the violence surrounding President Duterte’s “war on drugs,” Maryknoll Sister Marvie L. Misolas continues to work in the Philippines with the Maryknoll Sisters’ Environment and Climate Change ministry. The following article was written by Sister Marvie on recent developments to securing a healthy environment in which human rights can flourish in the Philippines. This article was published in the September-October 2016 issue of NewsNotes.

To be able to enjoy the right to life, we must have a healthy and safe environment. Our existence depends on the health of the ecosystem that supports various services needed for life to flourish. For example, our environment provides the air we breathe, the water we drink and use to raise food, the forests which promotes and protect biodiversity, and regulates the climate and weather. These ecosystem services are vital in the sustenance of life in the planet.

The Philippine environment is for Filipino people, not for corporations.

Gina Lopez, the newly appointed Secretary of the Department of Environment and Natural Resources is making waves in the news because of her swift and decisive actions to suspend mining operations of at least six mining companies because of unsustainable practices. Demolition of large fish pens along the coast of Laguna Lake is under way to reclaim and rehabilitate coastal ecosystems and give way for small fisher-folks chance to fish near shores sustainably. Secretary Lopez was also meeting with Indigenous Filipino groups in order to help enforce the law on ancestral domain lands which are affected by mining operations.

Enough food for the Filipinos: “Good mountain, good water, good life,” is a Chinese proverb borrowed by the new Department of Agriculture Secretary Emmanuel Pinol. This, Secretary Pinol said, is the principle on which the mission of providing “enough and affordable food the Filipino people” will depend. He agrees that a healthy Philippine ecosystem is the foundation of food security and sustainability. He vowed to help small farmers by expanding and providing free irrigation systems and to provide training for climate smart and adaptive agriculture. The Philippines has a double challenge experiencing 1.9 percent population increase annually and a limited area suitable for agriculture. Research is now underway to study the eating habits of Filipinos to make projections in a climate change-impacted future.

Path to Renewable Energy: According to Ruebin Muni of Greenpeace, the Philippines has a 200,000 megawatt potential for renewable energy yet less than 10 percent is developed. At present, the country has a total of 19 coal fired power plants (30 boiler units), with 29 more (59 boiler units) approved by the Department of Energy and projected to be in operation by 2020. In 2015, the Aquino administration awarded an additional 39 coal operating contracts. Renewable energy in the Philippines decreased from 33.92 percent of the total electricity generated in 2008 to 28.69 percent in 2011. This fall in renewable energy share was caused by the rise in coal production.

The Philippines has some of the most expensive electricity prices in Asia. The new government is currently reviewing its energy policies. Coal is angerous and a threat to health, emitting high levels of fine particle pollution, which is a serious health concern. The small particles can travel deeply into the lungs and cause harmful effects. Every year, 2,400 Filipinos die from pollution from coal emissions. Greenpeace supports a “no new coal” policy and efforts to stop and prevent new coal power plants from operating. They call for the Philippine government to adopt a plan to retire the existing 19 coal fired plants.

Photo: Wind farm at Bangui, the Philippines. Photo in the public domain via pixabay.com.