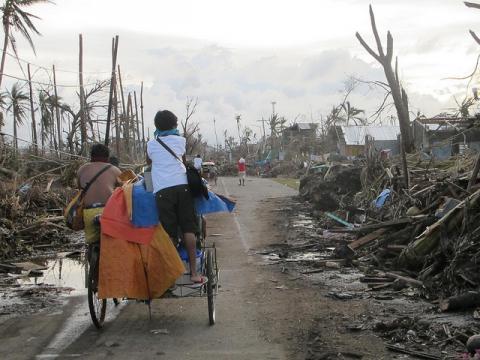 The following article was written by Maryknoll Sister Marvie Misolas and published in the January-February 2014 NewsNotes. Sr. Misolas was a member of the Maryknoll delegation to the United Nations Earth Summit Rio+20 which took place in Brazil in June 2012. She recently visited her home country of the Philippines as part of an internship related to her climate change studies at the University for Peace in Costa Rica.

Since June 2013, the Philippines has experienced three super typhoons, extreme climatic events that visited this country within the span of five months. In August, Baguio, the home of the Maryknoll Sisters’ Ecological Sanctuary, was shut down for almost a week because of super typhoon Labuyo (Utor) coupled with monsoon rains. Labuyo paralyzed northern Luzon as well as central Luzon prompting the national government to declare a number of provinces under a state of calamity. Another super typhoon Santi (Nari) dumped heavy rains that flooded most of central Luzon. And then, the November 2013 tragedy of typhoon Yolanda (Haiyan), regarded as the typhoon of the century, razed through central Visayas, leaving more than 5,000 dead, still thousands unaccounted or missing and millions of homeless. These storms cost the Philippines billions of dollars in economic damages. [The first name for each storm listed is the one used by the Philippine Atmospheric, Geophysical and Astronomical Services Administration (PAGASA, which means "hope" in Tagalog); the second name, in parentheses, is the name used by the World Meteorological Organization, WMO.]

While these super typhoons were surprising to many Filipinos living in their paths, they were not for scientists who have been studying the planet’s ongoing climate and geophysical changes. The latest vulnerability index by Maplecroft ranked Philippines ninth in the list of countries most vulnerable to the impacts of climate change. According to the Intergovernmental Panel on Climate Change’s Fourth Assessment Report (AR4) and PAGASA projections, mean temperatures in some parts of the Philippines will rise from 0.00C to 1.10C by 2020 and 1.20C to 2.20C by 2050.

In addition to the rise in temperature, the Philippines is expected to experience change in rainfall patterns which will bring long droughts and heavy rains, high intensity typhoons and more torrential rains. Sea-level rise will affect low lying coastal areas.

Envisioned impacts from the above climatic changes are the following (from the Japan International Cooperation Agency, JICA):

3. Agriculture: Changes in farming periods and prolonged drought as well as severe typhoons will affect food production, thus food security. Rise in CO2 concentration will be a concern.

In 2009 the Climate Change Act of the Philippines (RA 9729) mandated the creation of RA 10121 or the Philippine Disaster Risk Reduction Management Act of 2010 (DRRM), a national guide on how to achieve sustainable development with inclusive growth.

Among the provinces that are often hit by super typhoons and other extreme climatic conditions are those categorized to have the highest poverty incidence in the country. Most of them are located in the eastern seaboard of the Philippines. Climate justice must be discussed in addressing the effects of climate change in the lives of the most vulnerable to the effects of climate and environmental changes. In addressing the issue of adaptation and mitigation to climate and environmental changes, we must also address the economic empowerment of the people who are most affected.

The National Climate Change Action Plan (2011) clearly lays out seven priorities: food security, water sufficiency, environmental and ecological stability, human security, sustainable energy, climate-smart industries and services, and knowledge and capacity development. However, I think one of the most important objectives that should be the focus of government and civil societies is knowledge and capacity building of the local people. Information and understanding on the part of the vulnerable populations will enable them to make active decisions that will save their lives and economy.