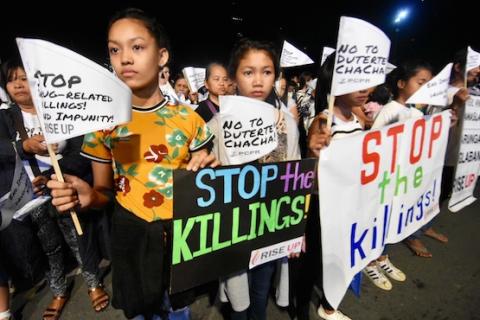 The Council of the Laity in the Philippines organized its annual “Walk for Life” on February 24 to protest extrajudicial killings and the push to reinstate the death penalty in the country. The following article was published in the March-April 2018 issue of NewsNotes

In the Philippines in February, marches, protests, fasts and a “Walk for Life” marked the 32nd anniversary of the nonviolent overthrow of the Marcos dictatorship, called the EDSA People Power’s Revolution. On February 25, 1986, hundreds of thousands of Filipinos gathered along the 54 kilometers of Epifanio de los Santos Avenue (EDSA) to call for the restoration of democracy, culminating months of nonviolent direct action training by the Catholic Church.

It was the power of the people that ended the oppressive Marcos regime. Hence, it came to be known as the EDSA People Power’s Revolution – one of the prime examples in modern history of the power of active nonviolence.

This year’s commemoration of that proud moment in Philippine history took place under a cloud of threats to Philippine democracy: Under the guise of President Duterte’s ‘war on drugs’ over 7,600 Filipinos have been victims of extrajudicial killings – possibly exceeding the number of victims from the martial law years under Marcos. Duterte has stated his support for bringing back the death penalty and he arranged for a hero’s burial for the remains of former dictator Ferdinand Marcos. Duterte is also trying to change the 1987 Philippine Constitution, which reestablished democracy after the People Power Revolution, to establish a federalist government which critics claim will only consolidate power in the hands of Duterte and a privileged few.

For nine days before the February 25 anniversary, Catholic farmers, fishermen, nuns, and priests staged a fast and protest at the People Power Memorial in Manila to dramatize their opposition to the proposed rewriting of the 31-year-old Constitution. “A shift to federalism,” said one participant, Fr. Robert Reyes, “will only give greater powers to family dynasties and landlords in the provinces.”

Benedictine nun Mary John Mananzan, one of the organizers of the newly-formed Movement Against Tyranny, agrees but went further, saying the goal of the proposed revision of the Constitution is to “concentrate all power in one man’s hands” and “is a formula for complete tyranny and dictatorial rule…we cannot allow another era of darkness.”

Archbishop Socrates Villegas, president of the Catholic Bishops’ Conference, and protégé of the late Jaime Cardinal Sin (who helped lead the People Power Revolution), denounced the ‘rape’ of EDSA People Power by the current administration in a letter to Cardinal Sin written days before the anniversary: Decrying the “relentless killings of the poor in the name of change…the glory now flickers in the darkness of fear and terror again.”

In his letter, the archbishop noted the recent hero’s burial of the late dictator: “History books are rewritten. Historical memory is revised. The hero is a villain. The plunderers are now heroes.” But reflecting on the continuing potential in the peoples’ engagement in active nonviolence, Villegas wrote:

“This land may be ruled by tyrants and killers, murderers may win elections, plunderers may grin at the ignorant voters they have cheated, trolls may keep hurling invectives at their peace loving countrymen…but we will still celebrate.”

Making a surprise appearance at the “Walk for Life” the Archbishop of Manila, Cardinal Luis Antonio Tagle, condemned the thousands of extrajudicial killings, lamenting the “culture of violence.” Catholic lay people organized the walk to demonstrate their opposition to the killings and to the death penalty. Cardinal Tagle cited Pope Francis’ 2017 World Day of Peace message on nonviolence, calling for a renewed “culture of nonviolence” among Filipinos to face the country’s challenges.

Loreta Castro, founder of the Center for Peace Education at Miriam College in Quezon City is a member of the Catholic Nonviolence Initiative, which has been gathering input from leading Catholic peacemakers to be used to encourage Pope Francis to write an encyclical on nonviolence. During a global online dialogue recently, Loreta heard the Palestinian peacemaker Nora Carmi speak from Jerusalem about the persistent nonviolent struggle of the Palestinian people in the face of tremendous oppression.

Echoing the Palestinian Christian’s hope, Loreta spoke of the strong Catholic leadership and the thousands of students, religious and laity who participated in the many marches, rallies and protests around the Philippines that marked the anniversary of the People Power Revolution, denouncing the extrajudicial killings and calling for the preservation of democracy enshrined in the 1987 constitution. From Jerusalem to Manila, the power of Gospel nonviolence inspires great courage and hope.

Photo: Filipino Catholics call for a stop to drug-related killings in the country during the 'March for Life' in Manila on Feb. 24, 2018. Photo by Angie de Silva and publiched by UCAN.