Philippines: Calm amidst the storm 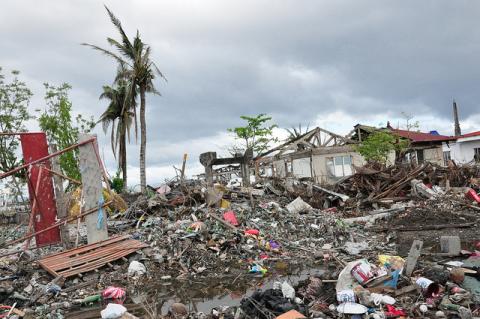 The following piece was written by Fred Goddard, former coordinator of the Maryknoll Affiliates; after living in the Philippines as a lay missioner many years ago, Fred moved back there in 2012. Maryknoll has served in the Philippines for several decades, but currently does not have missioners in the areas that were hard hit by the recent typhoon. However, another mission order, the Redemptorists, have served in this area for a long time; the following article, published in the March-April 2014 NewsNotes, is an account of some of the important work that is necessary after a natural disaster strikes and is most seamlessly accomplished by communities who have deep ties to the area.

Photo of destruction in Tacloban courtesy of the International Labour Organization

It has been more than three months since Typhoon Haiyan (locally known as Typhoon Yolanda) struck the Philippines as one of the strongest such storms in recorded history. Yet, for most people living in the hardest stuck places, they are now trying to survive a different kind of "storm" that is more subtle. These are the day-to-day struggles of the survivors trying to recover from the devastation of November 8, 2013. The people are still dealing with the most basic needs; a place to sleep, rebuilding their homes, finding work and even just finding something to eat. At the same time, the survivors are coping with the psychological trauma of losing so many loved ones, sometime almost entire families.

Much praise has gone toward the response of the international community, but that will only last a short time. The government response has also been frequently criticized for not responding fast enough, not reaching many communities and for political fighting between local government officials and the national government. Valid or not, recovery is slow. Typhoon Haiyan is the Philippines’ Katrina, but on a much larger scale.

The Redemptorists have focused much of their efforts on Tacloban and on Bantayan Island, which is north of the island of Cebu. However, through what has been organized as a "General Mission," they are spreading out to other parishes, especially in Eastern Leyte. Early efforts were focused on relief, but as response came in from the government, they have shifted to recovery and rehabilitation.

Redemptorist Brother Karl Gaspar, an old friend to many Maryknoll missioners, wrote, "The work involved with the General Mission is immense considering the thousands of households we hope to reach out to." In the Redemptorist parish alone, there are roughly 3,000 households, most of which were badly affected by the typhoon. The greatest need is healing from trauma and stress. One of the greatest concerns is if anyone will be left to rebuild, as those who can afford to leave or have relatives elsewhere have abandoned many of the hardest hit areas.

Those involved in the General Mission have done visitations to temporary shelters and tents and listened to people’s stories of survival and struggle. They tell the missioners their stories that are still so fresh in their memories. The volunteers and Redemptorist community have family prayers, incorporating rituals of grieving over their dead. Brother Karl also wrote, "As there have been reports of ‘children’s voices weeping and mothers’ groaning’ we’ve been asked to find ways to help still these voices."

Brother Karl goes on to say, "Liturgical celebrations have been celebrated among the ruins of this disaster for people to be affirmed in their belief that God never abandoned them in their hour of need. Sermons touched on the theme of God as vulnerable, too, but also caring and compassionate. People wept at being assured that God listens to the cry of the poor." The Redemptorist community has done psycho-social integration sessions with the youth and children using art therapy, but often the volunteers need as much care as the survivors after listening to the many stories and exposure to the devastation.

Recently, I was personally struck after hearing from a good friend who had just returned from a mission trip to New Orleans where they are still rebuilding communities and lives almost nine years after Hurricane Katrina. If it takes that long for a country with so much wealth and so many resources to rebuild, how much longer will it be for the people of Samar, Leyte and the central part of the Philippines? At least while the inner psychological storms continue to rage and survivors are often battered by the daily struggles to recover, the Redemptorist community and the many volunteers involved in the General Mission now and in the future provide some calm amidst the storm.