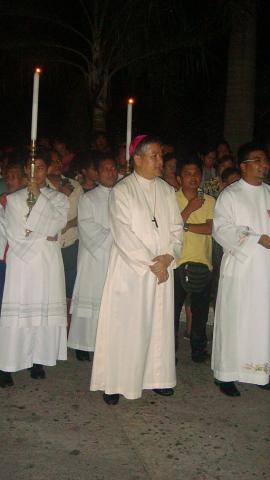 In a new pastoral statement, the Catholic Bishops Conference of the Philippines has unequivocally denounced President Duterte’s war on drugs for creating a “reign of terror” among the poor. The following article was published in the March-April 2017 issue of NewsNotes.

More than a thousand people a month have been killed since President Duterte began his “war on drugs” in the Philippines last June. Human Rights Watch describes the killings as a "human rights calamity." "This is nothing less than an absolute human rights disaster," said Phelim Kine, deputy director for Asia, "The numbers are absolutely shocking.”

With wide popular support for a clampdown on the illegal drug trade, President Duterte has used inflammatory rhetoric to encourage extrajudicial killings of drug users and dealers by vigilantes as well as by police. In a speech at a Manila slum last August, President Duterte encouraged citizens who knew any drug addicts to “go ahead and kill them yourself as getting their parents to do it would be too painful.”

Individual Catholic bishops had spoken out against the killings and the suffering inflicted on the families of the dead.

Last September, Archbishop Socrates Villegas, president of the Philippine Bishops’ Conference, asked parishes to put up “Thou Shall Not Kill" posters in communities and called for a "Day of Prayer for Life" on September 14. And he issued a pastoral letter in October.

"I am ashamed of the things I read about the Philippines in the international media and more ashamed of what I hear from our leaders," Villegas said then.

In the pastoral statement, the bishops spoke out in one voice and denounced President Duterte’s war on drugs for creating a “reign of terror” among the poor.

Just days earlier, according to The Philippine Star, Jerome Secillano, public affairs chief for the Catholic Bishops’ Conference of the Philippines, said that while there are individual churches that have put up banners denouncing the extrajudicial killings, some priests and bishops were afraid to speak out against the killings.

The pastoral statement begins with Ezekiel 18:32, “For I find no pleasure in the death of anyone who dies – oracle of the Lord God.”

“We, your bishops, are deeply concerned due to many deaths and killings in the campaign against prohibited drugs,” it reads. “This traffic in illegal drugs needs to be stopped and overcome. But the solution does not lie in the killing of suspected drug users and pushers. We are concerned not only for those who have been killed. The situation of the families of those killed is also cause for concern. Their lives have only become worse. An additional cause of concern is the reign of terror in many places of the poor. Many are killed not because of drugs. Those who kill them are not brought to account. An even greater cause of concern is the indifference of many to this kind of wrong. It is considered as normal and, even worse, something that (according to them) needs to be done.

“We are one with many of our countrymen who want change. But change must be guided by truth and justice.

“We stand for some basic teachings. These teachings are rooted in our being human, our being Filipino, and our being Christian.

1. The life of every person comes from God. It is he who gives it, and it is he alone who can take it back. Not even the government has a right to kill life because it is only God’s steward and not the owner of life.

2. The opportunity to change is never lost in every person. This is because God is merciful, as our Holy Father Pope Francis repeatedly teaches. We just finished celebrating the Jubilee Year of Mercy, and the World Apostolic Congress on Mercy. These events deepened our awareness that the Lord Jesus Christ offered his own life for sinners, to redeem them and give them a new future.

3. To destroy one’s own life and the life of another, is a grave sin and does evil to society. The use of drugs is a sign that a person no longer values his own life, and endangers the lives of others. We must all work together to solve the drug problem and work for the rehabilitation of drug addicts.

4. Every person has a right to be presumed innocent until proven guilty. Society has ways and processes to catch, prove guilty and punish perpetrators of crimes. This process must be followed, especially by agents of the law.

5. Any action that harms another (seriously) is a grave sin. To push drugs is a grave sin as is killing (except in self-defense). We cannot correct a wrong by doing another wrong. A good purpose is not a justification for using evil means. It is good to remove the drug problem, but to kill in order to achieve this is also wrong.

6. The deep root of the drug problem and criminality is the poverty of the majority, the destruction of the family and corruption in society. The step we have to take is to overcome poverty, especially through the giving of permanent work and sufficient wages to workers. Let us strengthen and carry forward the unity and love of the family members. Let us not allow any law that destroys the unity of families. We must also give priority to reforming rogue policemen and corrupt judges. The excessively slow adjudication of court cases is one big reason for the spread of criminality.

Often it is the poor who suffer from this system. We also call upon elected politicians to serve the common good of the people and not their own interests.

7. To consent and to keep silent in front of evil is to be an accomplice to it. If we neglect the drug addicts and pushers we have become part of the drug problem. If we consent or allow the killing of suspected drug addicts, we shall also be responsible for their deaths.

“We in the Church will continue to speak against evil even as we acknowledge and repent of our own shortcomings. We will do this even if it will bring persecution upon us because we are all brothers and sisters responsible for each other. We will help drug addicts so that they may be healed and start a new life. We will stand in solidarity and care for those left behind by those who have been killed and for the victims of drug addicts. Let us renew our efforts to strengthen families.

“Those of us who are leaders in the Church should strive to push forward or continue programs that will uplift the poor, like livelihood, education and health programs. Above all we will live up to — we all will live up to — becoming a Church of the Poor.

“Let us not allow fear to reign and keep us silent. Let us put into practice not only our native inner strength but the strength that comes from our Christian faith. Our Lord Jesus promised us: “You will have affliction in this world, but take courage, I have overcome the world” (Jn. 16:33).

“What will separate us from the love of Christ? Will anguish, or distress, or persecution, or famine, or nakedness, or peril, or the sword? No, in all these things we conquer overwhelmingly through him who loved us.” (Rom. 8:35,37) Yes, indeed, “For the Spirit that is in you is more powerful than the spirit in those who belong in the world.” (1 Jn. 4:4)

“As we commemorate the 100th year of the apparition of Our Lady of Fatima, let us respond to her call for prayer and repentance for the peace of our communities and of our country shrouded in the darkness of vice and death.”