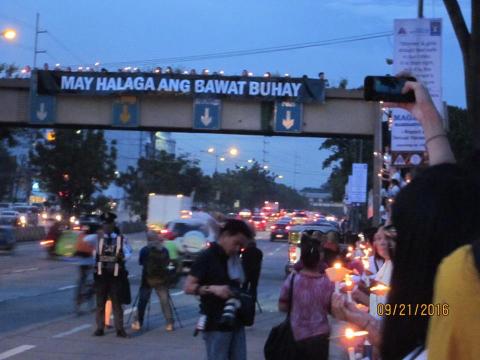 Archbishop Socrates Villegas of Lingayen-Dagupan, the president of the Conference of Catholic Bishops of the Philippines, condemned extrajudicial killings of suspected drug dealers and addicts in his Christmas message. The following article was published in the January-February 2017 issue of NewsNotes.

“We have Christmas but there is blood spilling on our streets and sidewalks,” Villegas said in his pastoral message that was read during Masses in the Diocese of Pagadian and posted on the diocese’s website.

“This blood spilling is ugly because it is not the plan of God for His people. Murder is ugly. Extra judicial killing is ugly,” he said.

According to the news service of the Conference of Catholic Bishops of the Philippines (CBCP News), “more than 6,100 bodies have piled up since President Duterte took office in July, having promised a brutal crackdown on the illegal drug trade in the country.”

Archbishop Villegas said there are thousands of families mixing Christmas carols with “quiet tears because a loved one has been stricken down by a bullet.”

He also warned that anger has become so common that revenge “is slowly enchaining us.”

“Anger pushes us to pursue the illusion that we must kill in order to defend life,” he added.

He said that many people are living in fear not just of death but also of “calumny, malicious gossip and trumped up charges” and eventually become silent.

Photo: May halaga ang bawat buhay (“Every life has value”) sign hanging at a prayer vigil for the victims of President Duterte’s war on drugs in the Philippines on September 21, 2016. Photo courtesy of Maryknoll Sister Marvie Misolas.