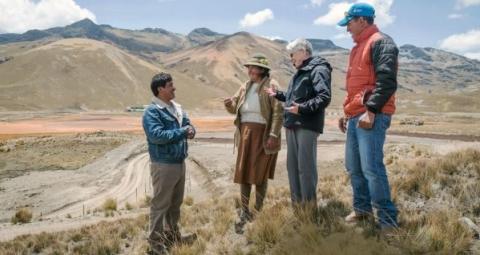 A Maryknoll-supported legal collective in Peru brought an amicus brief as part of trade tribunal case which was decided on November 30. The following article was published in the January-February 2018 issue of NewsNotes.

On November 30, the three-judge panel at the International Court for State Investment Disputes, housed in the World Bank, released its decision in the case of Bear Creek Mining v. Peru. Bear Creek originally sued the government for $522 million in 2011 — the expected profits of the Santa Ana silver mine and profit loss from their unrelated Corani mine.  The suit was brought under the Canada-Peru free trade agreement.

Maryknoll missioners have a particular interest in this case as a Maryknoll-supported organization works with affected communities around the mining area.

The Human Rights and Environment Association (Associación Derechos Humanos y Medioambiente -DHUMA) was founded after the Diocese of Puno closed its human rights office. DHUMA was cofounded and is still supported by Maryknoll Sisters and Maryknoll Fathers and Brothers. Sister Patricia “Pat” Ryan remains part of the DHUMA team as an advisor.

Communities living near the Santa Ana Mine accused Bear Creek Mining Company of orchestrating an inadequate consultation process and making their portable water and sacred mountain vulnerable to contamination by mining chemicals. The government canceled the permit for the silver mine following mass demonstrations by Aymara and Quechua communities that paralyzed Puno City for weeks in 2011.

When Bear Creek launched the complaint in arbitration court over the suspension of the mine, DHUMA submitted an amicus brief to bring the community perspective to the tribunal. DHUMA argued that the company had not secured “social license,” or an agreement with the community.  Representatives of DHUMA and Sister Pat Ryan attended the oral arguments in Washington, D.C. Their presence was precedent-setting.

DHUMA faults the company for their failure to obtain social license and for the nontransparent way they obtained the rights to the land - using a Peruvian citizen to get around a law (Decree 83) that says corporations cannot acquire land near the Bolivia-Peru border.

But DHUMA also faults the state for their rapacious support for extractive projects and their willingness to put corporate profits above the human rights of the Peruvian people. The government ultimately gave Bear Creek a waiver for Decree 83 reasoning that the mine was a public necessity. The government also did not ensure that the company complete a through and adequate consultation process of the Aymara communities which is a legal obligation under both the International Labor Organization’s Convention 169 (Peru is a signatory) and Peruvian national law. They in fact supported the company’s project up until the social conflict came to a head.

The case received international attention from the UN Special Rapporteur on Indigenous Peoples, Vicki Tauli Corpuz, who visited Puno last year. DHUMA staff Cristobal Yugra (director) and Rodrigo Lauracio attended forums in New York and Geneva focused on business and human rights to present this case to demonstrate the importance of legally binding mechanisms to hold corporations accountable for human rights violations, such as the UN Binding Treaty on Transnational Corporations currently being negotiated in Geneva.

According to IAReporter, the three arbitrators ordered Peru to pay $18.2 million and 75 percent of Bear Creek’s legal fees. This is only 3 percent of the original petition. The judges tossed out Bear Creek’s claim that they should receive damages for the financial impacts on the unrelated Corani mine. They also decided that given the very early stage of the project that it was fair for them to receive compensation for their initial investments. DHUMA saw this as an overall positive outcome given it was a small amount that ultimately is paid by Peruvian citizens.

One arbitrator wrote a dissent based on DHUMA’s amicus brief that suggested the company should be equally at fault as the government and that the government should pay only about half of the final settlement.

Nearly 100 people were originally charged with obstructing public services, disturbing the peace, and committing aggravated extortion against the state as part of the demonstrations in Puno that have become known as the “Aymarazo.” While the state dropped charges against 82 people, 18 people remained accused.  DHUMA was part of the legal team defending the 18. Ultimately, only the movement leader, Walter Aduviri, was sentenced in July 2017 to seven years in prison and ordered to pay a $600,000 fine. His lawyers are appealing the decision.

Criminalization of protest is a problem in Peru and globally. DHUMA had hoped the outcome of the trial could send a message that the right to peaceful protest is a valid means to have legitimate political and social demands heard and attended by the State and therefore should not be criminalized.

Photo: Maryknoll Sister Patricia Ryan (third from left) and a member of an indigenous community in Peru.