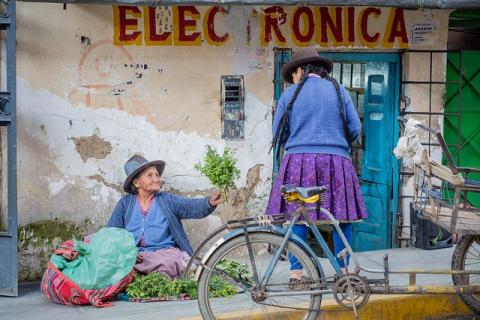 The following article examines newly-elected President Pedro Pablo Kuczynski’s plan to fulfill promises to reduce income inequality and ensure all Peruvians have access to running water, health care and free primary education by increasing profits from mining and mineral exports. This article was published in the September-October 2016 issue of NewsNotes.

In July, Pedro Pablo Kuczynski was sworn in as president of Peru for a five-year term. The 77-year old son of Polish immigrants and Ivy league-educated economist defeated Keiko Fujimori by a razor-thin margin of only 50,000 of the 18 million votes cast. The race was so close that the electoral court made an intentional effort to include votes from outside Peru. Keiko Fujimori is the daughter of former president Alberto Fujimori, who is serving a 25-year sentence in jail for corruption and human rights crimes.

Before the election, most political analysts believed Keiko Fujimori would win. But just a week before the election, The Associated Press reported new allegations tying her to drug trafficking. With the congressional elections decided earlier, Fujimori’s party has the majority. As president, Kuczynski will face an adversarial Congress still licking its wounds from the presidential elections.

While Fujimori’s economic plan might not have differed much from Kuczynski’s plan, her style of governance and use of presidential power, if based on the strongman tactics her father used as president from 1990 to 2000, could have severely undermined democracy in Peru. Many suspected that Keiko would have pardoned her father, and that he may have wielded power behind the scenes, bringing back the authoritarian reign of Fujimorismo. With a high majority in Congress, Fujimori would have had power unlike most recent presidents who have had to build support across party lines. Also, if both the executive and congressional power were in the hands of Fujimori’s party, she could have appointed judges in her party’s favor.

Kuczynski has indicated that, as president, he will continue the neo-liberal policies of his successor. The vast majority of his cabinet is male and come from the private sector. Kuczynski served as the finance minister under former neo-liberal President Alejandro Toledo and has also served as a World Bank executive. Part of his economic plan is to focus on the mining sector, which is essentially a continuation of the previous president’s economic plan that was highly dependent on extractive industries.

Kuczynski is a proponent of free trade and has expressed hopes of bringing China into the recently signed Trans-Pacific Partnership trade agreement negotiated between Peru, the U.S. and ten other nations. The articles for ratification were introduced in the Peruvian congress at the end of July. Kuczynski plans to travel to China for his first trip abroad as president to seek investments in metal refineries and smelters that would help Peru wring more from its exports of copper, zinc, gold and silver.

In his inaugural speech, Kuczynski announced his objective to reduce the poverty rate in the country to 10 percent of the population by 2021. According to the World Bank, Kuzynski’s former employer, the poverty rate in Peru for 2014 was 23 percent of the population. Peru’s economy, already highly dependent on resource extraction, started a downturn in 2012 when the international prices of raw materials crashed. According to Latinamerica Press, the average economic growth for Peru fell from 5.9 percent in 2013 to 2.4 percent in 2014 and 3.3 percent in 2015, and for 2016 the World Bank predicts that the economy will grow at a similar rate as last year.

Mining has devastated communities throughout Peru, as noted in the article in this issue of NewsNotes entitled “Peru: Indigenous people assert land, resource rights.” The article includes details of the work of Maryknoll Sister Pat Ryan and the Center for Human Rights and the Environment. They are working with indigenous communities who are defending the rights to their land and livelihood and who are facing the devastating impacts of mining: land grabs, violence, polluted air and water, and a deterioration of overall human health.

Kuczynski’s plan to unblock investment in the mining industry may not revive the economy as he hopes. “The drop in mining investment is global,” said José de Echave, an economist and co-founder of CooperAcción, an NGO that works with communities affected by mining, in an interview with Latinamerica Press. “There has been a decline in mining concessions in Peru since 2014 and mining investments will keep falling for the next few years. Currently there are only expansions of old projects taking place.”