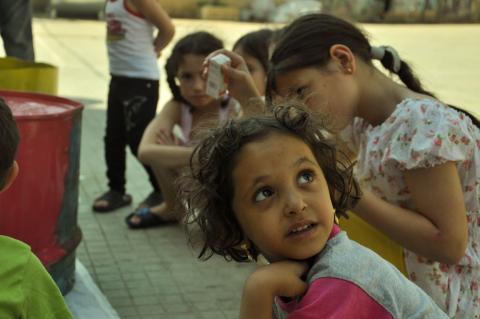 The 2014 Pax Christi International Peace Award has been granted to the Jesuit Refugee Service Syria (JRS Syria) for its outstanding dedication in providing emergency relief to Syrians since the war began in 2011*. Established in 1988, the Award is funded by the Cardinal Bernardus Alfrink Peace Fund and honours contemporary individuals and organisations who make a stand for peace, justice and nonviolence in different parts of the world.

JRS Syria belongs to an international Catholic organisation with a mission to accompany, serve and advocate on behalf of refugees and other forcibly displaced persons. JRS programmes are found in more than 50 countries, providing assistance to refugees in camps and cities, individuals displaced within their own countries, asylum seekers in cities and to those held in detention centres.

In the Middle East and North Africa, JRS began its work in 2008 in response to the huge number of Iraqi refugees fleeing the conflict in their country. Following the violent events in Syria from 2011 onwards, JRS Syria is now mainly focusing on emergency relief to those in greatest need, medical support and educational activities to enhance reconciliation and co-existence amongst people of different socio-economic and faith backgrounds.

Currently, JRS emergency relief consists of food support, provision of hygiene kits and non-food items, basic healthcare, shelter management and rent support. Fundamental to the mission of JRS Syria is the educational and psychosocial support that is offered to 9,800 children and women. Other services include legal and medical referrals, family visits, and small livelihood projects. In total, more than 300,000 people are helped by JRS in Damascus, Homs, Aleppo and the coastal areas of Syria.

JRS Syria helps civil society to resist the logic of war and to survive the violence that threatens to overwhelm and destroy communities. Perhaps the most obvious challenge facing JRS, as a faith-based organisation, is that religion plays such a significant role in the Middle East, often as a mark of difference, exploited to spark conflict. Bringing people together is not easy in such a scenario. The JRS teams are composed of people of different faiths, of national staff and international volunteers, who serve all without distinction. JRS strives to serve all marginalised groups, be they Muslims or Christians. In this way, inter-religious dialogue remains at the heart of JRS daily activities.

The work of JRS is guided by the humanitarian principles of humanity, independence, impartiality and neutrality. JRS is inspired by the core values of compassion, justice, participation, solidarity, hospitality, dignity and hope.

Through this award, Pax Christi International acknowledges JRS Syria’s tireless efforts in providing services to vulnerable people affected by conflict, and welcomes the organisation’s aim of expanding its activities to promoting peace and reconciliation among divided communities in Syria. At the same time, the award symbolically honours humanitarian workers – women and men, compassionately serving fellow Syrians suffering due to the effects of the three-year long civil war.