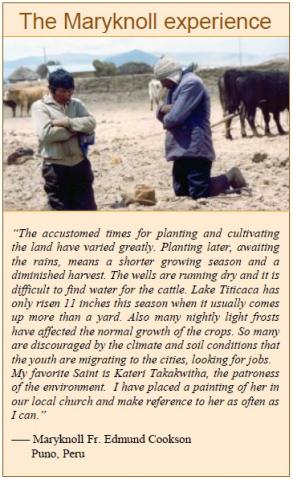 In almost every community in every country where Maryknoll missioners live and work, water and food are urgent concerns. Climate change is already affecting the fragile food security of some communities.

Subsistence farmers who are already vulnerable to food insecurity face immediate risk of increased crop failure, new patterns of pests and diseases and loss of livestock. People living on the coasts and floodplains and in mountains, drylands and the Arctic are most at risk.

In Peru, farmers struggle with diminishing crop yields due to rising temperatures, changing weather patterns and drought. According to the Intergovernmental Panel on Climate Change, a UN body, Peru will see the greatest temperature rises due to climate change, despite the fact that the country is responsible for just 0.1% of global greenhouse gas emissions. They predict a dry season average temperature increase of between 0.7°C and 1.8°C by 2020 and between 1°C and 4°C by 2050.

More than 80 percent of food consumed in low-income countries is produced by smallholder “family” farmers. Many smallholder farmers are women. With investment in strategies to deal with unpredictable rains and shifts in suitable crops, and rehabilitation of degraded lands,  smallholder farms can feed the majority of the world’s population while at the same time restoring ecosystems and reducing agriculture's carbon footprint.

One practice gaining more recognition is agroecology. Agroecology incorporates traditional knowledge from small farmers, and local inputs that conserve natural resources and ensure communities have the right to nutritious and adequate food sources. With the majority of small farmers being women, agroecological farming practices benefit rural women and families. 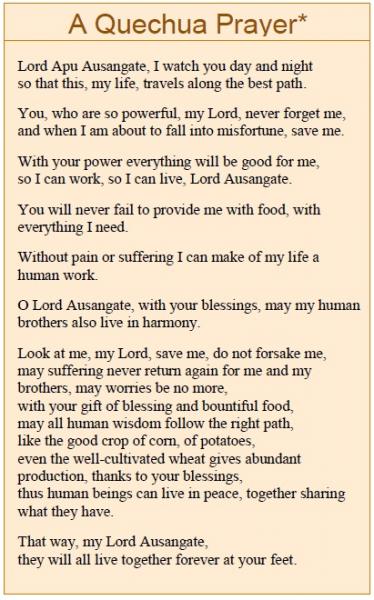 Recognizing that smallholder farmers are catalysts for transforming the way the world manages the supply of food and the integrity of creation, we need more mindful ways of consuming.

Prepare your own meals

Cooking at home reduces food waste, and enables you to eat more affordably and know what is in your food.

Half of the food we produce is thrown away each year. In addition to ethical, social, and economic implications, it also has an ecological footprint. In this season of Thanksgiving, plan carefully to ensure there is enough for all and that that leftovers are not wasted.

Without action, climate change will devastate smallholder farmers, who will be affected by greater risks, from rising sea levels to more frequent storms and droughts.

Learn how the agroindustrial food system causes half of all greenhouse gas emissions and what alternatives exist. Watch this video by La Vía Campesina: http://bit.ly/CoolthePlanet

Sign this petition to negotiators attending the UN Climate Summit in Paris urging them to include smallholder farmers in their plans. Go to: http://bit.ly/AdaptNow

* Quechua Prayer: The Quechua people are a predominately Catholic indigenous group in South America, especially in Peru. A video of Demetrio Roca Wallparimachi reciting this traditional prayer in Quechua, his native language, was produced for the exhibition "The Great Inka Road: Engineering an Empire" on view at the National Museum of the American Indian in Washington, D.C., through June 1, 2018, and is online at http://bit.ly/QuechuaPrayer