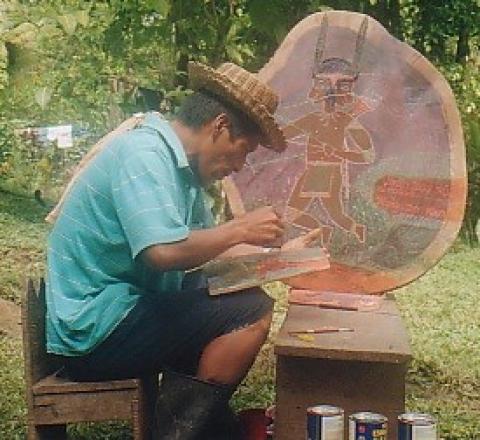 The following article, published in the July-August 2016 issue of NewsNotes, was written by Alfonso Buzzo, Peace Fellow with the Maryknoll Office for Global Concerns.

In May, Generadora del Istmo, the company that owns and operates the Barro Blanco hydroelectric dam in Panama, opened the floodgates and inundated six hectares of indigenous territories. The Panamanian Public Servies Authority (ASEP) authorized the flooding.

The indigenous Ngäbe people, directly affected by these actions, have spoken out in resistance and in defense of their sacred land, despite violence and ongoing threats by the Panamanian authorities.

Panama did not sign the International Labor Organization’s Convention 169 that requires “free prior and informed consent” from indigenous peoples at any phase of a project that threatens their territories and culture. This leaves indigenous people in Panama vulnerable to displacement from development projects.

As derived from the right to property protected under the UN Declaration on the Rights of Indigenous Peoples that Panama has signed and ratified, indigenous people have rights to adequate housing, to possess, use, and freely enjoy their traditional lands and territories, and to not be forcibly removed from them.

Barro Blanco, a project registered under the UN’s Clean Development Mechanism, is financed by two European state-owned banks, the German Investment Corporation and the Netherlands Development Finance Company (FMO), as well as by the Central American Bank for Economic Integration (CABEI). CABEI and FMO are also responsible for financing another controversial dam, the Agua Zarca in Honduras.

In March, 2016, Berta Cáceres, the internationally-respected indigenous and environmental rights advocate, was assassinated while leading the Lenca indigenous community in resistance against the construction of the Agua Zarca dam.

“We, the affected communities, have never given our consent to Barro Blanco. This project violates the Panamanian Constitution and our indigenous rights. ASEP has not warned us about the imminent flooding that will destroy our crops, some of our houses, and kill our livestock,” declared Manolo Miranda, spokesperson of the Movimiento 10 de Abril (M10), a group representing indigenous peoples directly affected by the project.

“Panamanian authorities must protect the rights of the Ngäbe people who have not consented to this project,” said Alyssa Johl, Senior Attorney at the Center for International Environmental Law. “We urge the Panamanian government to ensure the personal safety and security of the Ngäbe people and otherwise fulfill their human rights obligations. The world is watching.”

Faith in action: Sign a petition organized by Rainforest Rescue against the impending forced relocation of the indigenous Ngäbe people: http://bit.ly/29mv7S7

Photo: A member of the Ngäbe indigenous community paints with traditional materials. Photo available in the public domain via wikimedia commons.