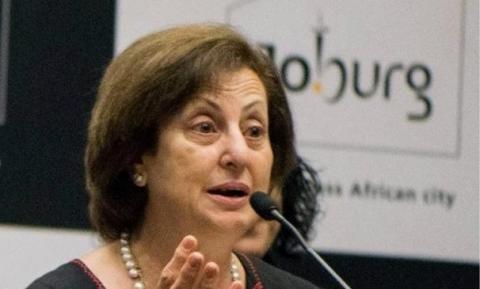 Nora Arsenian Carmi, a Palestinian Christian born just months before Israel was founded, is both a leading peacemaker and refugee in her own divided city of Jerusalem. Educated in Catholic schools and Protestant universities, Carmi is actively involved in Palestinian society as a community organizer and has worked with the YWCA, Sabeel Ecumenical Liberation Theology Center, and Kairos Palestine. Carmi and the Maryknoll Office for Global Concerns work together on the Catholic Nonviolence Initiative, a project of Pax Christi International. We invited Nora Carmi to share her opinion on the Trump administration’s decision to move the U.S. Embassy to Jerusalem. The following article was published in the March-April 2018 issue of NewsNotes.

Since December 6, when President Donald Trump made the rash decision of deciding the fate of Jerusalem by declaring it the capital of Israel and announcing the plan to move the U.S. embassy from Tel Aviv to Jerusalem, the country of Israel/Palestine has been in turmoil. President Trump’s decision violates international law and defies the United Nations which considers Jerusalem as occupied by Israel since 1967 and thus waiting for a shared and just solution. This is why foreign embassies exist only in Tel Aviv and not in Jerusalem.

The sole exception is the so-called Christian embassy, the “International Christian Embassy Jerusalem” to be exact, created by an evangelical Christian Zionist group in 1980 when they established their “embassy” in West Jerusalem. Embassies represent sovereign states. Christianity is not a sovereign state and thus does not need an embassy. President Trump has made it clear who he is siding with.

Most member states represented in the UN General Assembly denounced President Trump’s decision. Both the United States and Israel simply ignore them. Even more dangerous than the decision itself is the United States’ attempt to distort the recognized status of Jerusalem, an open city for peoples of all faiths and home to over 300,000 Palestinians.

As a follower of Jesus the Christ, our Savior, I have been anchored for 70 years in Jerusalem/Palestine, Jerusalem/Jordan and Jerusalem/under Israeli Occupation. I hear Jesus crying over the city that has yet to understand His message of peace. “If this day you only knew what makes for peace – but now it is hidden from your eyes…because you did not recognize the time of your visitation” (Luke 19:42-44).

The arrogant declaration of the U.S. president has narrowed and almost closed the gates to peace! It has launched a chain of controversial reactions: on the one hand, emboldening the Israeli government to impose even harsher, unjust measures, including taxation on the churches, and on the other, intensifying the resilient nonviolent actions of Palestinians decrying their portrayal as “terrorists.”

One such example is the nonviolent action taking place in response to the story of young Ahed Tamimi, the courageous Muslim girl from Nabi Saleh, who dared slap the Israeli soldier trying to defile the sanctity and privacy of their home after having shot her cousin in the face. Ahed and her mother, Nariman, have been held in administrative detention and the trial continuously postponed. Her punishment may be years of imprisonment. The case of the blue-eyed blond-haired Palestinian Ahed, who celebrated her 17th birthday while incarcerated, has gone viral. Many peace-loving people around the world are advocating for her release while nonviolent demonstrations and marches in response to Trump’s decision to move the embassy continue weekly, after Friday prayers. All of this strengthens the unity of the Palestinian people in the face of systematic violence.

The reaction of the churches in Jerusalem to President Trump’s decision was evident during the annual week of prayers at the end of January. Daily prayers held in the churches of different denominations all focused on a commitment to a nonviolent but firm effort to find a just solution that maintains the open city of Jerusalem. At the same time, church leaders have issued a joint statement about Israel’s decision to impose taxes on church properties thus violating the status of religious organizations.

Promoting nonviolence in a strong and unjust military system is the only way to preserve the dignity of human life, a challenging responsibility that ensures mutual respect, equity, and reconciliation.

Postscript: The situation in Jerusalem is in graver danger of violent explosion. On February 25, church leaders were forced to make the difficult decision to close the Church of the Holy Sepulchre in response to Israeli legislation regarding the collection of taxes from churches and their properties. Following international pressure and condemnation by Palestinian Christians, Israel decided to suspend the legislation and the Church of the Holy Sepulchre reopened three days later. Prayerful nonviolent action and pressure continue to be needed. God have mercy.