Outcry Against Deaths of Migrant Children 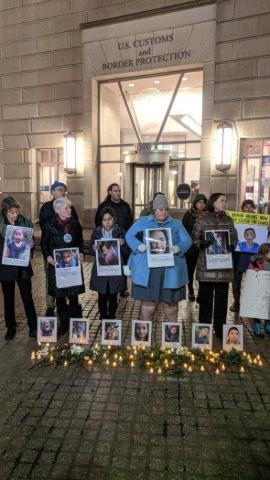 The Maryknoll Office for Global Concerns joined other faith-based and immigrant advocacy organizations in gathering to pray and protest on the anniversary of the death of Jakelin Caal Maquin, a child migrant who died after being taken into U.S. Customs and Border Protection custody. The following article was published in the January-February 2020 issue of NewsNotes.

December 8, 2019 marked the first anniversary of the death of seven-year-old Jakelin Caal Maquin of Guatemala, the first migrant child to die in U.S. custody in over a decade. She was the first of seven migrant children to die in the past year while in U.S. custody or immediately upon release. In light of this anniversary and of International Human Rights Day on December 10, faith-based and immigrant advocacy groups drew attention once again to the inhumane and unjust systems that allowed for the deaths of these children and the lack of investigation into their deaths that has followed.

On December 9, the Interfaith Immigration Coalition, of which the Maryknoll Office of Global Concerns is a member, held a candlelight vigil outside the headquarters of U.S. Customs and Border Patrol (CBP) in honor of Jakelin and the other deceased migrant children. Attendees gathered around photos of the children surrounded by candles and flowers. Faith-based groups and religious leaders prayed for the children, naming each of them. They also prayed for the development of a just immigration system that protects the vulnerable. “God holds the lives of these children dear,” said a spokesperson from Sojourners, a Christian magazine. “And God will hold us accountable for how we treat children and their families.”

Members of the Congressional Hispanic Caucus spoke at the event, condemning the treatment of migrant children and CBP’s refusal to administer the flu vaccine to people in detention. “This is a nation with a greater conscience than that,” said Representative Joaquin Castro of Texas, speaking on the failure to provide medical attention to people in detention.

Although the Center for Disease Control has recommended the flu vaccine for all people in immigration detention, CPB continues to refuse the vaccine for people in their short-term processing centers. Three of the migrant children’s deaths involved the flu. According to autopsy reports, the other migrant children died of various health problems that immigrant advocates claim were not immediately identified or treated adequately while in detention, which they say is reflective of a trend of poor medical attention for detainees.

On Human Rights Day, December 10, the International Mayan League released a statement condemning the violation of human rights at the U.S.-Mexico border, particularly the rights of indigenous peoples. Five of the seven migrant children who died were of the Maya nation. The statement decries the failure of the U.S. government to investigate the deaths of the children and reform the systems which dehumanize migrants and indigenous people: “because of the aforementioned human rights violations…[the Mayan League] continues to call for an independent, exhaustive, and transparent investigation concerning Maya children’s death and the deaths of all the children at the border, to hold all those responsible accountable for these deaths, and provide the necessary applicable justice and reparations.”

On the anniversary of Jakelin’s death, the Maryknoll Office for Global Concerns also released a statement calling on the U.S. government “to end the inhumane treatment of migrants, especially children, and to build just and humane immigration and border policy that respects the dignity of all people.” “These policies are unacceptable,” the statement reads. “Respect for the dignity of migrants, especially children and families, is central to our Catholic identity and our baptismal call to mission.”