Opposition to funding for a border wall 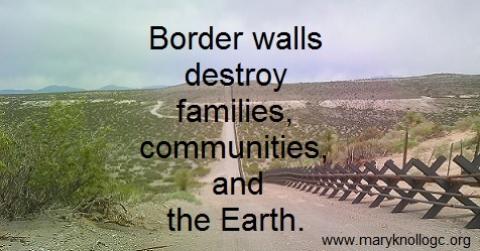 As the House moves to consider the Fiscal Year 2018 Security Minibus, H.R. 3219, we are profoundly concerned about the inclusion of $1.6 billion slated for border wall. In addition to spending billions of taxpayer dollars , adding funding for the border wall in this legislative package undermines a fair and transparent legislative process. Instead of allowing legislators and the public to fully consider the impacts of funding wall construction, the Majority is using rushed and underhanded legislative maneuvers to circumvent the vast and legitimate opposition that exists for this measure, even within their own party.

Including border wall funding in a Security Minibus is based on the false premise that our borders are somehow violent and insecure. This false premise has been used to justify and advance anti-immigrant, anti-border, pro-criminalization, and anti-environment legislation that has negative economic and civil rights impacts on border communities. The fact is that communities along the border are some of the safest in the country. According to the FBI’s Uniformed Crime Reports, cities on the border are safer than cities away from the border. Places like El Paso, Texas have long topped the lists of safest cities for their low crime and violence. Additionally, according to the American Immigration Council, communities with more immigrants are likely to be safer than places with fewer immigrants.

Border walls are an ineffective tool in curbing undocumented migration between the United States and nations south of the border. Rather than deter migration, the current 650-mile barrier along the U.S.-Mexico border has forced vulnerable migrant populations to pursue more dangerous routes of travel. The continued construction of a border wall portrays an attitude of hatred and animosity towards our neighboring nations. Additionally, construction of this wall would undermine indigenous border communities, potentially destroying elements of their history, archeology, and culture. Border security measures must consider the historic Tribal lands and families occupying the southern border.

For all of the above reasons, we strongly urge you to vote NO on the Fiscal Year 2018 Security Minibus, and oppose funding for border walls, levees, or additional infrastructure along the southern border of the United States.

UPDATE: U.S. Catholic Bishop Joe Vásquez, chair of the USCCB Committee on Migration, sent a similar letter to members of the House of Representative on the following day, July 26, 2017.