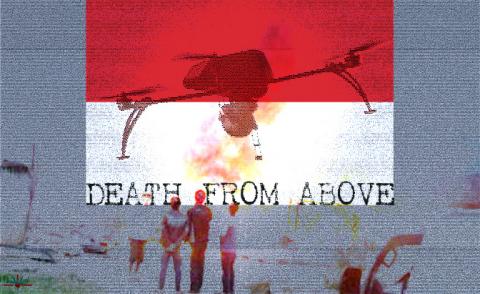 The Maryknoll Office for Global Concerns opposes the U.S. military launching armed drone strikes in volatile northern Kenya. This article was published in the January-February 2021 issue of NewsNotes.

On December 11, the Maryknoll Office for Global Concerns joined a coalition of interfaith leaders led by the Interfaith Working Group on Drone Warfare in sending a letter to the U.S. House and Senate Armed Services Committees, expressing opposition to a request by the Africa Command of the U.S. military (AFRICOM) to begin carrying out armed drone attacks in northern Kenya.

The proposed strikes would reportedly target Al-Shabaab, a Somali-based terrorist organization tied to Al-Qaeda, which occasionally carries out attacks in Kenya. On January 5, 2020, about 15 members of Al-Shabaab attacked Manda Air Strip on Camp Simba, a military base used by both U.S. and Kenyan forces in Kenya’s Lamu County near the Somali border, killing three Americans.

“The regions in which the U.S. seeks permission to use lethal drones are volatile,” the letter states, “and such actions could quickly escalate to internal conflict.”

Maryknoll Fr. Frank Breen, who served for 29 years in Kenya, explains, “Northeastern Kenya is home to a group called Shifta – former Somali militants who fought a war to secede from Kenya in the 1960s. When they lost the war, they became bandits and they still have many weapons. In recent years, the banditry has been reduced but on occasion there is an incident.

“Who are the drone strikes supposed to go after?” Breen asks. “Al-Shabaab coming over from Somalia, or Kenyan citizens of Somali ethnicity who live in northeastern Kenya? Drone strikes have proven to have many collateral casualties and as the region is almost solely Muslim and ethnic Somali (but Kenyan citizens) they would suffer and it could lead many of them to side with Al-Shabaab rather than with the Kenyan government.”

“Kenyans are aware of the threat that Al-Shabaab poses,” the letter to legislators states, “but the added insecurity created by drone strikes will not mitigate that threat; instead, authorizing the use of drone strikes will increase tensions and provoke further attacks while creating substantial human rights implications in the region.”

Kenyan President Uhuru Kenyatta told French journalists that he would refuse permission for the U.S. to carry out drone attacks inside Kenya.

U.S. drone strikes globally, and specifically in Somalia, have increased dramatically under President Trump, while accountability and vetting requirements for such attacks have been removed.

“Yet this approach has not eradicated the threat of Al-Shabaab,” the letter continues, “and has had incredibly damaging effects on the safety, stability, and social fabric of countries in the Horn of Africa. Further expanding this approach into Kenya, including the use of drones, poses grave risks.

“Moreover, we would like to highlight the impact that such strikes have had elsewhere on social cohesion, family structures, legitimacy of the respective national governments, and communities' perception of U.S. intervention. As evidenced by the last 13 years in Somalia, U.S. drone strikes do not bring an end to terrorist attacks. Instead, they have historically played a part in exacerbating destabilization and spurring further radicalization. Drone strike programs lack adequate transparency, accountability, and reparations for civilian casualties.”

“Instead of lethal drones, we need to invest in community systems that encourage youth to stay in schools and shun violence. Local influencers and non-traditional partners (like religious actors, media personalities, etc.) are important to shape social norms of inclusion and agency. The U.S. approach to addressing Al-Shabaab requires a transnational approach, but it also requires new tools that have proven effective in changing the environment enabling Al-Shabaab to operate in Somalia and along the Swahili Coast.”

The AFRICOM request to initiate drone strikes in Somalia requires the permission of the Secretary of Defense. On November 9, President Trump fired then-Secretary of Defense Mark Esper, the first in a series of personnel changes among top Pentagon leadership.

Acting Secretary of Defense Christopher Miller has not indicated how he might respond to the request. As Assistant Secretary of Defense for special operations and combating terrorism, Miller was behind an aborted plan to enlist Qatar’s help in weakening Al-Shabaab ties to Al-Qaeda.

President Trump has since announced a withdrawal of U.S. troops from counterterrorism operations in Somalia. It is unclear how AFRICOM’s request would fit into the Administration’s strategy for the region, or how that strategy will change under the incoming Biden administration.

The interfaith coalition appeals to Congress to bar the U.S. military and the White House from pressuring Kenya to permit the use of lethal drones within its borders.