Nuns on the Bus for immigration reform 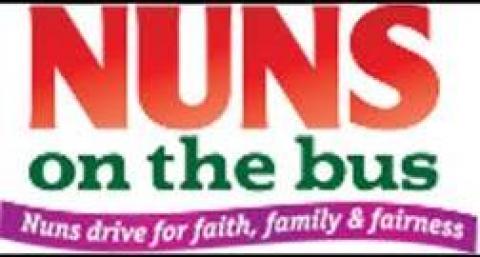 We support our colleagues at NETWORK, a national Catholic social justice lobby, and their Nuns on the Bus project. Last summer, the bus tour highlighted the call for just economic policies and a federal budget that protected the most vulnerable members of our society. This summer, the bus trip calls for immigration reform. Following is a message from Sr. Simone Campbell, SSS, executive director of NETWORK:

"The Holy Spirit gives NETWORK and our nation another gift of a perfectly timed bus trip! [On May 28], we will begin in New Haven, Connecticut, with a pre-launch blessing. Then, [on May 29] in Liberty Park, New Jersey, we will launch our bus trip for immigration reform in sight of Ellis Island and the Statue of Liberty.

"This is happening during the congressional recess week immediately after the Senate Judiciary Committee voted out a comprehensive immigration reform bill. While it is not everything we would have wanted, the bill is a big step forward and is worthy of vigorous support. Be sure to view Sen. Richard Durbin's (D-IL) video on our Nuns on the Bus website as he discusses the reason his faith nourishes his work for immigration reform.

"On our 15-state bus trip, we are eager to lobby senators, representatives and their staffs in their local offices. But I am personally most eager to meet people along our 6,500-mile route and hear their stories about how immigration affects the 100 percent! ...

"The Constitution challenges us by saying 'We the People' are forming a more perfect union. It doesn't say 'We the Citizens' or 'We Who Got Here First.' No, it calls on all who reside here to work together to build our democracy.

"Therefore, we must create an immigration system for the twenty-first century so everyone residing in the U.S. can work together to shape our democracy. It is an urgent matter of faith and patriotism."

Why a bus trip for immigration reform? Our nation’s immigration system is broken. Increased enforcement is tearing families apart and causing suffering for those who are otherwise willing and eager to contribute to our society. Our nation needs an immigration system that reflects our faith values and the needs of the twenty-first century. Such a system reunites families and allows workers the opportunity to come forward without fear to pay taxes and earn legalization. A functioning system will serve the needs of our entire nation -- the 100 percent.

What's happening in Congress? On April 16, Sen. Chuck Schumer (D-NY) and seven bipartisan cosponsors (the so-called "Gang of Eight") introduced the "Border Security, Economic Opportunity, and Immigration Modernization Act," the first real attempt in some time to address our broken immigration system. The bill passed the Senate Judiciary Committee on Tuesday, May 21, and is heading for a full Senate vote. In the House, Speaker John Boehner (R-OH) stated on May 23 that they will not vote on a Senate-passed measure and will instead produce their own legislation.

Learn more about this summer’s Nuns on the Bus trip here.