Nuclear posture of the United States 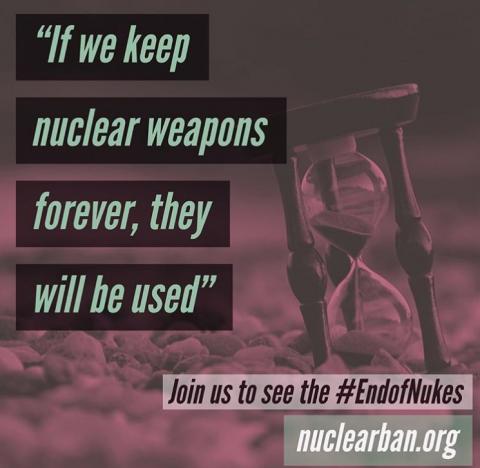 The 2018 Nuclear Posture Review by the United States signals a new arms race and increasing potential of the use of nuclear weapons. The following article was published in the March-April 2018 issue of NewsNotes.

Last November, Pope Francis named the elimination nuclear weapons a “moral imperative.” Surrounded by some of the world’s leading thinkers on peace, including 11 Nobel Prize winners, at the Vatican for a conference entitled “Perspectives for a World Free from Nuclear Weapons and for Integral Disarmament,” the pope rejected the strategy of nuclear deterrence supported by his predecessors and condemned not only “the threat of their use” but also “their very possession.”

In his remarks opening the conference, Pope Francis spoke of “the catastrophic humanitarian and environmental effects of any employment of nuclear devices.” He went on to say, “If we also take into account the risk of an accidental detonation as a result of error of any kind, the threat of their use, as well as their very possession, is to be firmly condemned.”

It is with this new thinking in mind that we look at the 2018 Nuclear Posture Review from the U.S. Department of Defense, released in February. The review signaled a new nuclear arms race, directly counter to the papal message. The United States appears to be embracing the outdated and failed strategy of nuclear deterrence which, the review states, requires $1.2 trillion over the next 30 years to modernize and maintain the U.S. nuclear arsenal, and lowers the threshold for employing nuclear weapons.

In some ways the review is a continuation of the status quo, advancing thinking and initiatives of previous Administrations, including the most recent. There is an appreciable shift, however: a more aggressive posture and more expansive potential use of the weapons of mass destruction.

The 2018 Nuclear Posture Review calls for “low-yield” or “tactical” nuclear weapons in order to enhance “flexibility.” These low-yield options have an explosive yield (amount of energy released upon detonation) of one to 20 kilotons of energy. For reference, the weapon used to devastate Hiroshima had a 15-kiloton yield, well within the range of “low-yield,” resulting in a final death toll of 135,000 - although many estimate it to be higher. The review argues that creating more weapons like this is “important for the preservation of credible deterrence.”

The review rejects a “sole purpose” policy for nuclear weapons, i.e., the only purpose of nuclear weapons being to deter, and if necessary, respond to the use of nuclear weapons by other countries. It also rejects a “no first use policy,” or in other words, use only in retaliation to a nuclear strike. The review also affirms that the Trump administration is prepared to use nuclear weapons first in numerous situations, while maintaining “some ambiguity regarding the precise circumstances” precipitating a nuclear response, citing use in “extreme circumstances,” which include but are not limited to “significant non-nuclear attacks,” e.g., conventional strikes on “allied or partner civilian population or infrastructure on the U.S.” or some 30 “allies and partners.”

The review asserts that the United States will not ratify the Comprehensive Nuclear Test Ban Treaty of 1996, which prohibits all nuclear explosions, civilian and military, in all environments, which Russia ratified.

Concerning Russia, the United States’ leading adversary in the nuclear weapons realm, the review states “the United States will not forever endure Russia’s continuing non-compliance,” in terms of the Intermediate-Range Nuclear Forces Treaty. The review seems to promote the development of U.S. missiles as a means to intimidate Russia and force compliance.

The review ignores the Treaty on the Prohibition of Nuclear Weapons, the first legally-binding international agreement to comprehensively prohibit nuclear weapons, which member states at the United Nations passed in July 2017. Without naming the treaty, the review states that all talk of nuclear abolition is “fueled by wholly unrealistic expectations” of disarmament without an overhaul of the existent international security landscape.

Beatrice Fihn, who accepted the Nobel Prize for Peace on behalf of the International Campaign to Abolish Nuclear Weapons in 2017, stated in response to the review, “There are only two possible endings to this story: either the end of nuclear weapons or the end of us all.”

Fihn attended the conference at the Vatican last November, where she said the pope was “giving moral leadership” on disarmament. The 2018 Nuclear Posture Review represents a significant move by the United States in the opposite direction.

Faith in action: The Bulletin of the Atomic Scientists has reset the hands of the Doomsday Clock to 2 Minutes to Midnight. We offer three ways to take action to stop the threat of nuclear war at http://bit.ly/2CGV6iF