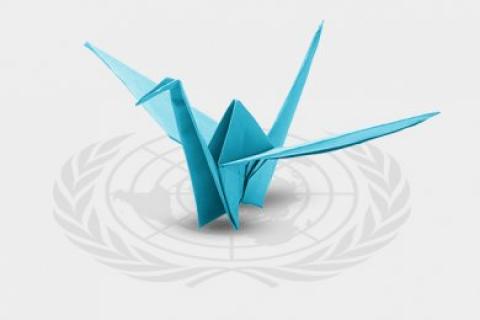 The following article was prepared by Marie Dennis, co-president of Pax Christi International, and published in the September-October 2014 NewsNotes.

September 26 is the first International Day for the Total Elimination of Nuclear Weapons. The aim of the day is to enhance "public awareness and education about the threat posed to humanity by nuclear weapons and the necessity for their total elimination, in order to mobilize international efforts towards achieving the common goal of a nuclear-weapon-free world."

For decades, faith-based and civil society organizations have sustained attention to the need for nuclear disarmament through serious research, creative organizing and effective advocacy. After a long hiatus, broken only by the slow step-by-step approach of U.S.-Russia bilateral negotiations, increased attention to the urgent need for nuclear disarmament is beginning to balance what, since the end of the Cold War, has been a singular focus on nonproliferation.

Multiple important events have taken place in the past year to reignite momentum toward the total elimination of nuclear weapons. Among them were several meetings of and a report from the Open Ended Working Group on Nuclear Disarmament; two successful international conferences in Norway and Mexico on the humanitarian consequences of nuclear war, with another planned for Vienna in December 2014; movement, if very slow, toward a conference to establish a weapons of mass destruction free zone in the Middle East; and the Republic of the Marshall Islands lawsuits filed in The Hague and in California against all nine nuclear-armed nations (United States, Russia, United Kingdom, France, China, Israel, India, Pakistan, North Korea) for their failure to honor their disarmament obligations under the Non-Proliferation Treaty (NPT). These efforts will continue.

The United Nations Open Ended Working Group (OEWG) was established by the UN General Assembly in November 2012 following widespread frustration at the lack of progress in other forums, including the Conference on Disarmament, which has not been able to negotiate any disarmament agreements since the Comprehensive Nuclear Test Ban Treaty in 1996.

Open to all UN member states as well as to international organizations and civil society groups, the OEWG met over 15 days in May, June and August 2013. The OEWG "opened the door" to multilateral negotiations by bridging long-standing differences, floating new ideas and finding common ground between non-nuclear States, allies of nuclear weapon states and those nuclear-armed states that participated.

According to UNFOLD ZERO, which was launched at the UN in New York on May 7 of this year by a coalition of NGOs with the participation of the United Nations Office of Disarmament Affairs (UNODA), the process of the OEWG was a "breath of fresh air" compared to other official forums. Governments discussed issues in a non-confrontational, exploratory way. Civil society groups were able to participate fully in the deliberations leading to a final consensus report. In October 2014, the UN General Assembly will decide whether to resume working sessions of the OEWG.

Also in recent months, the humanitarian consequences of producing, maintaining or using nuclear weapons have received unprecedented attention. The research and educational efforts of International Physicians for the Prevention of Nuclear War and other organizations point clearly to the catastrophic impact of launching even a few of the weapons. They write, "Nuclear weapons are the most destructive, most indiscriminate, most inhumane instruments of mass murder ever created. Their use – and even their possession – goes against every principle of international humanitarian law. In fact, it is likely that humanity could not survive a nuclear war using even a fraction of the arsenals in existence today."

The Vienna Conference planned for December 8-9, 2014 will give voice again to non-nuclear states insisting on the urgency of eliminating the extreme danger to the human community and planet Earth presented by the 16,300 nuclear weapons that now exist.

The next Review Conference for the Nuclear Non-Proliferation Treaty will take place in 2015. Reaching Critical Will presents excellent background material on the NPT, including a summary of progress toward implementation of 64 specific commitments made by governments which were party to the NPT at the last Review Conference in 2010.