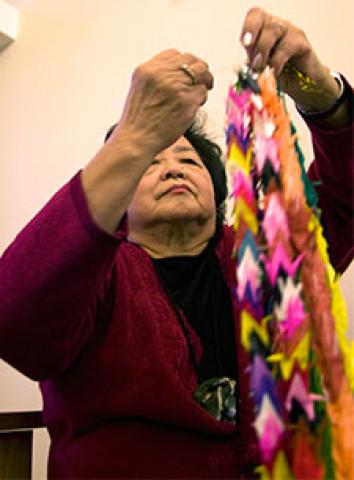 In March, UN member states held the first round of controversial negotiations on a nuclear weapons ban. One month later, amid rising tensions between the U.S. and North Korea, the Maryknoll Office for Global Concerns co-sponsored a conference on nuclear disarmament at the U.S. Capitol where leading voices for nuclear disarmament were heard. The following article was published in the May-June 2017 issue of NewsNotes.

On April 27, just one day after President Trump summoned all 100 U.S. Senators to the White House for a briefing on the situation with North Korea, a conference on nuclear disarmament was held at the U.S. Capitol. Congressman Hank Johnson opened the conference, which was entitled “Toward a Fundamental Change in Nuclear Weapons Policy,” with strong remarks in favor of nuclear disarmament, particularly in light of statements made by the Trump Administration about the possibly of a military response to threats from North Korea.

The U.S. is considering unilateral missile strikes on North Korea, without regard to relations with South Korea or Japan, both long-time strategic partners of the U.S. in the region. Unfortunately, Rep. Johnson ended his remarks by speaking in favor of modernizing the U.S. nuclear arsenal – but with the goal of eventual nuclear abolition.

Rep. Johnson’s remarks were immediately called into question by Professor Zia Mian, a physicist and co-director, with Alexander Glaser, of the Program on Science and Global Security at Princeton University. Professor Mian expressed his strong disagreement and dismay with Rep. Johnson’s support of modernizing the U.S. nuclear arsenal while at the same time advocating for disarmament. Professor Mian called such a contradiction in policy from one of the few strong proponents of disarmament in Congress a “tragedy” that “shows just how far we have to go.”

The panels at the conference examined potential flashpoints for nuclear war: tensions between India and Pakistan, North and South Korea, the U.S. and China, and the U.S. and Russia. The irrationality and unsustainability of the idea of “deterrence” were reiterated. Research about the catastrophic humanitarian and environmental consequences of nuclear war was also shared.

One panelist who particularly moved the audience was Setsuko Thurlow, a survivor of the atomic bombing of Hiroshima who has worked her entire adult life to impress upon the world that we must never again subject human beings to the horrors that she and the other victims of nuclear weapons have faced.

Setsuko Thurlow’s story is unspeakable, yet she has chosen to relive it over and over for the sake of helping people understand the atrocity. Her memory of that day included words such as “bluish-white flash,” “the sky was dark as night,” “sensation of floating,” “pinned by a collapsed building,” “ghostly figures who did not look like human beings,” “hair standing straight up, naked and tattered, bleeding and burned,” “everything burning or smoldering,” “began to hear cries of ‘God help me,’” “someone said to me ‘don’t give up, I’m trying to free you.’”

Thurlow said that her hope lies in the potential for the UN to negotiate a nuclear ban treaty, an initiative in progress with 130 member states participating. The first week-long session began March 27 with the eventual goal of producing a legally-binding instrument to prohibit and eliminate nuclear weapons.

Unfortunately, the U.S. led a boycott of the talks by nuclear-armed nations and allies. U.S. Ambassador to the UN Nicki Haley says the world is too unsafe to give up nuclear weapons. “We can’t say that we can protect our people by allowing the bad actors to have [nuclear weapons] and those of us that are good, trying to keep peace and safety, not to have them.”

Nevertheless, the conference continued with overwhelming support from the majority of member states. Faith groups met at the Isaiah wall every morning during the conference to pray for successful negotiations.

Monsignor Antoine Camilleri, the Holy See’s Undersecretary for Relations with States, read a letter of support to conference participants from Pope Francis.  In it, the pope reminded them that the UN Charter is founded on the peaceful solution of disputes and the development of friendly relations between nations. “An ethics and a law based on the threat of mutual destruction – and possibly the destruction of all mankind – are contradictory to the very spirit of the United Nations,” Pope Francis wrote.

The dynamics that took place at the opening of the Conference are an indication of the serious obstacles to the elimination of nuclear weapons. The second round of negotiations will be held at the United Nations in New York June 15–July 7.

Faith in action: On June 17, the Women’s International League for Peace and Freedom will coordinate a rally and march in New York City to demand a strong and effective treaty. For more information, go to https://www.womenbanthebomb.org/