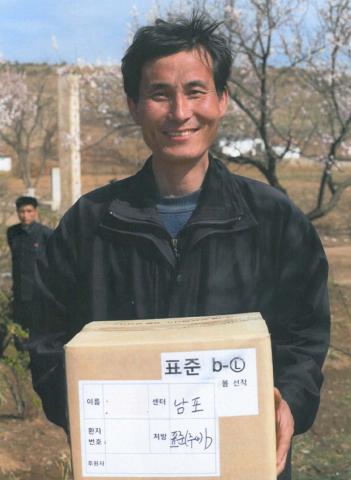 The following article appeared in the July-August 2013 NewsNotes.

From April 18-May 4, Maryknoll Society Superior General Fr. Ed Dougherty and Maryknoll Fr. Jerry Hammond joined a small delegation that delivered medical supplies to people in North Korea who suffer from multi-drug resistant tuberculosis. The following article is excerpted from Fr. Hammond’s report on their visit.

… With the advent of jet travel, visiting the mission field has become much easier and more common. Even in this regard, North Korea is an exception. While we travel[ed] to the capital city of Pyongyang by air, we had to detour through Beijing to pick up our visas, meaning total travel time to [reach] North Korea was two days. Once you arrive in North Korea, moreover, it takes an entire day to visit each one of our eight treatment centers supported through the Eugene Bell Foundation, where I serve on the executive board. …

North Korean hospitality also reminds one of the "good old days" before international travel became routine. We are always treated with the greatest courtesy by Ministry of Public Health officials ... Once we have arrived at a treatment center, however, the visit really gets down to business.

The 700 tuberculosis patients who are treated in our program are all suffering from multi-drug resistant TB, and require at least two years of inpatient care. Every day a patient has to take six kinds of medications, including some that cause severe side-effects.

In most circumstances, foreigners are not permitted to reside in North Korea on a permanent basis but are allowed to make visits of two to three weeks. Eugene Bell delegations make two visits per year, one in the spring and one in the fall. As you might imagine, we have to accomplish a lot in a short period of time. Our delegation personally tests each new patient to confirm his or her diagnosis. Diagnosing new patients has been greatly simplified, thanks to special diagnostic equipment called GeneXperts. Of the four we now have, three were donated by Maryknoll, the Seoul Archdiocese and the Daejeon Diocese. On every trip we also provide each patient a six-month supply of expensive medications for multi-drug resistant TB. On the average, a patient will receive four medication boxes over a two-year period. These boxes, costing about $1,000 apiece, give a multi-drug resistant TB patient one last chance at recovering from this deadly disease. Treatment also helps prevent the disease from spreading to the patient’s family.

The part of the trip I like best is our "graduation ceremonies" for patients who have completed treatment. Usually members on the delegation are asked to place a necklace of cranes (a symbol of long life) around the necks of patients who have completed the program. I am often asked to say a few words of congratulations and encouragement. I get a big smile when I promise to pray for them. I hope you too will remember our patients in your prayers.

So much more ought to be done as the needs are so great. Visiting North Korea reminds one of the passages in the Bible where the sick crowded around Jesus begging to be cured. We do our best to enroll as many as possible, giving priority to those who are most sick. But sadly, due to a chronic shortage of medications, we have to turn many away. Not everyone who receives treatment recovers, despite our best efforts. On each trip my emotions move from sheer joy at seeing some patients improve to deep sadness when I hear of the death of someone I have gotten to know personally. Though sometimes heartbreaking, to be with these dear people in life and death reminds me of what being a Maryknoll missioner is all about.

Photo from delegation report -- "This spring Myungchul Oh was diagnosed with MDR TB using our new GeneXpert equipment and was able to start treatment immediately."