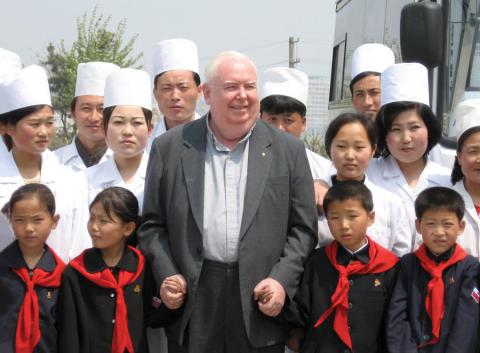 Korea Peace Now!, a global movement of women mobilizing to end the Korean War, commissioned an international and multidisciplinary panel of independent experts to assess the human cost of sanctions on North Korea, and particularly on North Korean women. The following is the executive summary of the 48-page report. The following article was published in the January-February 2020 issue of NewsNotes.

North Korea is one of the most sanctioned countries in the world. While sanctions used to target mostly the country’s military and elite, they have evolved in recent years into an almost total ban on North Korea-related trade, investments, and financial transactions. Several UN agencies have raised alarm at the impact on the population, with growing calls for humanitarian and human rights impact assessments.

To better assess this issue, the Korea Peace Now! campaign commissioned a report from an international and multidisciplinary panel of independent experts, including some with extensive humanitarian field experience in North Korea. The Human Costs and Gendered Impact of Sanctions on North Korea represents the first comprehensive assessment of the adverse consequences of these sanctions, drawing on often neglected information from UN agencies on the ground as well as the authors’ combined expertise in public health, law, economics, history, and gender studies. In particular, the report highlights the case of women as one of the vulnerable groups differentially affected by the sanctions.

Read the entire report on the Korea Peace Now! website.The authors examined the humanitarian, developmental, and gendered impact of sanctions

Sanctions are impeding the ability of the country and of international aid organizations to meet the urgent and long-standing humanitarian needs of the most vulnerable parts of the population. Although the UN Security Council has repeatedly stated that the sanctions are not intended to have adverse humanitarian consequences, its case-by-case exemptions mechanism is insufficient to prevent this outcome in practice. Life-saving aid is being fatally obstructed by delays, red tape, and overcompliance with financial sanctions.

Sanctions are also impeding the economic development of the country. UN and unilateral sanctions have resulted in the collapse of the country’s trade and engagement with the rest of the world, thereby undermining and reversing the progress that North Korea had made in overcoming the economic crisis and famine of the 1990s.

Sanctions destabilize North Korean society in ways that have a disproportionate impact on women, resonating with patterns observed in other sanctioned countries. The resulting economic pressure tends to exacerbate rates of domestic violence, sexual violence, and the trafficking and prostitution of women. Sanctions also affect North Korean women differentially due to the dual social expectation that they be the primary caretakers of their families and communities, and workers fully integrated into the economy. Thus, sanctions doubly burden women through their adverse humanitarian and developmental consequences, especially when they impact their livelihood by targeting industries that have high ratios of female workers.

The report concludes by raising concerns that the sanctions in their current form may not be reconcilable with international law, especially humanitarian and human rights norms.

1)  Resolve the security crisis that led to the current situation in accordance with international law.
2)  Lift all sanctions that are in violation of international law, in particular of the UN Charter and of applicable human rights and humanitarian norms.
3) Adopt urgently, in interim, all measures available to mitigate and eliminate the adverse consequences of sanctions on the humanitarian and human rights situation in North Korea.
4) Conduct gender-sensitive humanitarian and human rights impact assessments of sanctions currently in place.
5) Ensure women’s equal and meaningful participation in peace and security negotiations and processes, in accordance with UNSC Resolution 1325 on Women, Peace, and Security. Take into account gender considerations and the rights of women in all deliberations concerning sanctions on the DPRK (Democratic People’s Republic of Korea). §