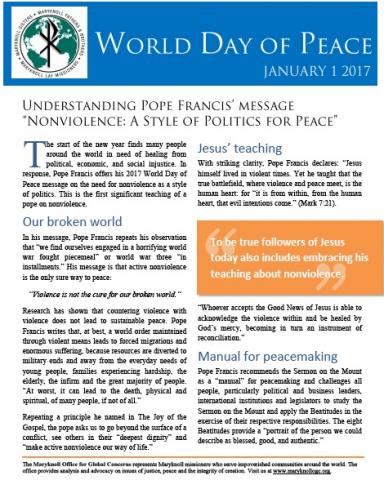 The Maryknoll Office for Global Concerns co-organized an event on “Nonviolence as a Style of Politics for Peace” at the UN in New York with the Permanent Observer Mission of the Holy See and the Catholic Nonviolence Initiative, a project of Pax Christi International. The following article was published in the March-April 2017 issue of NewsNotes.

In his recent message for the World Day of Peace, commemorated on January 1, Pope Francis reflects on “our broken world” and repeats his observation that “we find ourselves engaged in a horrifying world war fought piecemeal” or world war three “in installments.”

The pope's message is that active nonviolence is the only sure way to peace. (Read and share the World Day of Peace message.)

In addition, the Maryknoll Office for Global Concerns has produced a two-page summary of the World Day of Peace  message (pictured) that individuals and parishes can use to study the message.  Click HERE to download a copy

Pope Francis selected active nonviolence as his theme for this 50th World Day of Peace Message at the request of participants of the conference. It is the first significant teaching of a pope on nonviolence, which he names as a priority of the Church:

“I pledge the assistance of the Church in every effort to build peace through active and creative nonviolence.”

On March 2, Gerry Lee, director of the Maryknoll Office for Global Concerns, was scheduled to  join a panel of leading Catholic peacemakers and a representative of a UN agency at an event hosted by the Permanent Observer Mission of the Holy See at the U.N., to discuss Pope Francis’ message which is entitled “Nonviolence: A style of Politics for Peace.”

A recording of the event will be available online at http://webtv.un.org/. Search videos for "Nonviolence: A Style of Politics for Peace."

The complete list of scheduled speakers and their topics is as follows: