A new year, an ever-increasing hope 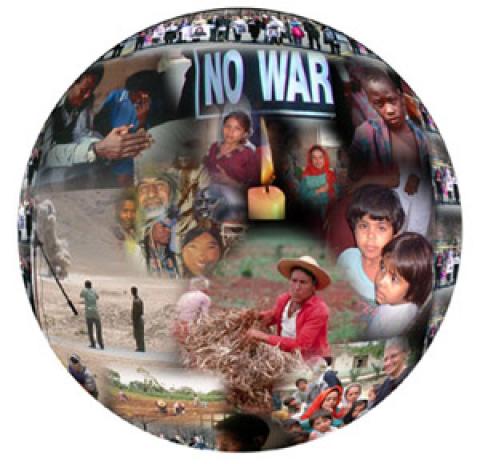 The following article was published in the January-February 2016 issue of NewsNotes.

Always there was hope, because the universe itself is to be freed from the shackles of mortality and enter upon the liberty and splendor of the children of God. Up to the present, we know, the whole created universe groans in all its parts as if in the pangs of childbirth. (Romans 8: 21-22)

The new year dawned as the old one ended – with war and threats of more war, with poor communities under water or suffering extreme weather phenomena, with terrorism, families wracked by violence, refugees fleeing for their lives turned away at our borders, and politicians enamored of fear-mongering and a language of hate. In times like these, we are challenged to not give in to despair, and, as St. Paul says, to “always be ready …to account for the Hope that is within you." (1 Peter 3:15)

Yet as people of faith we believe in love, not hate; we believe in the redemptive power of nonviolence and compassion; and we come together as children of God facing the new year in hope.

We are continuing to learn from Laudato Si’, Pope Francis’ encyclical: to hear the cry of the earth and the cry of the poor and to transform ourselves and our world from a “throwaway culture” and a “culture of indifference” to a “culture of care” that includes care of oneself, care for others, and care for the environment.

Last month, a new global solidarity on climate change emerged in Paris during the UN climate talks. For the first time, 195 nations agreed that Earth is in a climate crisis and that we must act now to slow global temperature rise. The Paris agreement puts us on a path to solutions to save lives and significantly diminish the threat of climate change to the world’s impoverished people and God’s whole creation.

This is a new beginning, but just a beginning. There is still a long road ahead to ensure that climate action, when applied, is equitable, just, and fair. Many people are doing what they can to change their lifestyles and reduce their use of fossil fuels, but all of us can do more. Furthermore, governments and corporations must also act decisively if we are to succeed in saving our planet.

We are also beginning a Year of Mercy, following Pope Francis’ call to “show mercy because mercy has first been shown to us.” Pope Francis urges us to become “practitioners of forgiveness, specialists in reconciliation, experts in mercy” by reflecting on the corporal and spiritual works of mercy. Jesus taught that we live as his disciples when we feed the hungry, give drink to the thirsty, clothe the naked, welcome the stranger, heal the sick, visit the imprisoned, and bury the dead.

For more than one hundred years Maryknoll missioners have joined in the struggles for justice of poor and indigenous communities, migrants, refugees, and those on the margins of society. As strangers ourselves, we have been welcomed, and we have embraced new cultures and new languages. Even during times of injustice and violence, we have witnessed the triumph of the human spirit and the presence of Jesus among us.

As we welcome this new year and search for signs of hope, we recall the words of Dorothy Day, whom Pope Francis highlighted in his speech to Congress last September: “If we had faith in what we were doing, making our protest against brutality and injustice, then we were indeed casting our seeds, and there was the promise of the harvest to come.” (The Long Loneliness)

And we cherish the faithful witness and the words of hope of Maryknoll Sister Maura Clarke: “We have so much to give thanks for. In spite of all the problems about us, the lack of jobs, the terrible injustice against the poor, the contrast of the very rich having so much and the millions of poor not having the security of the next meal, we feel an ever-increasing hope which only belongs to those who know that Christ is here…How very privileged we are to love and work among the poor.”