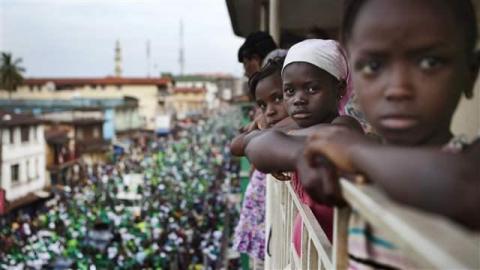 The following article appeared in the May-June 2013 issue of NewsNotes. Photo from the FragileStates.org website.

The following article is written by Marie Dennis.

South Sudan, Haiti, Afghanistan, the Democratic Republic of the Congo, Iraq, East Timor – over 40 countries, most in Africa and Asia, are identified by the Organization for Economic Cooperation and Development (OECD) as fragile states, with weak capacity to carry out governance functions, and inability to develop mutually constructive relations with society.

Seth Kaplan, writing for www.fragilestates.org, adds that political identity divisions should be specifically named as a characteristic of fragile states, pointing to Syria as a case in point: "Only countries that are both sociopolitically divided (by ethnicity, religion, clan, etc.) and lack a reasonably effective government apparatus are structurally fragile."

According to the UN System Task Team on the Post-2015 UN Development Agenda, "The nature of violent conflicts has changed dramatically in recent decades. The predominant form of violent conflict has evolved from national armies fighting each other (inter-state wars); to armies fighting for independence, separation or political control (intra-state or civil wars); to various forms of violence, involving non-state actors such as rebels, gangs and organized crime." They can be driven by a wide range of political, economic, social and environmental factors, such as socio- economic inequalities, joblessness, human rights abuse, political exclusion and corruption.

At the same time, "the consequences of violence on development are significant and long-term. Violent conflict causes death, disease and displacement, destroys physical and social capital, damages the environment, decreases school attendance and discourages investment. The effects are both immediate and long-term."

The Task Team also notes that the concept of development has broadened over time, "from a narrow focus on economic growth in the 1950s to an emphasis on basic needs in the 1970s to a broad view in the 1990s that emphasizes human development, human security and, more recently, freedom …" They suggest that the overall framework of the post-2015 development agenda include peace and security, sustainable socio-economic or human development, and cross-cutting issues from socio-economic inequalities to political exclusion and that a specific target on violence also be specifically.

The International Dialogue on Peacebuilding and Statebuilding (www.pbsbdialogue.org/about/), comprised of conflict-affected states, their development partners and international organizations, brings partners together in an open policy forum to:

A major outcome of this forum is the New Deal on Engagement in Fragile States (www.newdeal4peace.org), which the International Dialogue proposed at the 2011 High Level Forum on Aid Effectiveness. The peace and security goals (PSGs) of the New Deal, relating specifically to the characteristics of fragile states, are 1) Legitimate politics - Foster inclusive political settlements and conflict resolution; 2) Security - Establish and strengthen people’s security; 3) Justice - Address injustices and increase people’s access to justice; 4) Economic foundations - Generate employment and improve livelihoods; and 5) Revenues and services - Manage revenue and build capacity for accountable and fair service delivery.

The New Deal will be implemented initially in seven self-nominated pilot countries (Afghanistan, Central African Republic, Democratic Republic of Congo, Liberia, Sierra Leone, South Sudan and Timor-Leste) and was endorsed by 35 countries and six international organizations, including the UN Development Group and the World Bank.