NAFTA renegotiations: Better deal for whom? 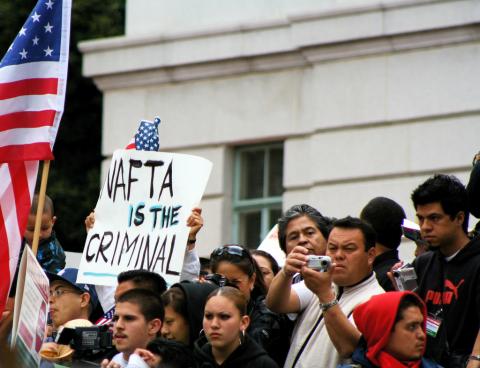 The United States has laid out an ambitious schedule and hinted at plans for a new North American Free Trade Agreement with Mexico and Canada. The following article was published in the September-October 2017 issue of NewsNotes.

Mexico, Canada and the United States were scheduled to meet for a second round of renegotiations of the North America Free Trade Agreement (NAFTA) in early September, despite President Trump’s continued threats to pull out. The rounds are scheduled every two to three weeks until the new deal is complete, which is considerably faster-paced than is typical for trade talks. With the upcoming midterm elections in the United States and presidential election in Mexico, the administrations of Donald Trump and Enrique Peña Nieto are eager to finalize negotiations by the end of 2017 or early 2018.

Despite President Trump’s desire to “get a better deal for America,” the talks appear to be business-as-usual. The negotiators are currently discussing ways to incorporate provisions of the Trump-rejected TransPacific Partnership (TPP) trade deal under the guise of “modernizing” NAFTA. By modernizing they mean including intellectual property protections for the internet age, opening up more investment markets to competition, adding more patent protections for Big Pharma which would further limit people’s access to medicines, and adding new patents on seeds which would make it more difficult for smallholder farmers to grow food for their family and livelihoods. Federal officials have said that the U.S. plans to introduce its list of proposed changes in the third negotiating round in Canada in late September.

A few of the changes that the Trump administration has been considering could benefit vulnerable communities that have been hurt by NAFTA thus far. For example, the United States originally planned to end the business friendly, un-transparent investment courts systems (also known as investor-state dispute settlement or ISDS). This system empowers individual companies to sue countries for expected future loss of profits. For example, in TransCanada’s ISDS claim against the U.S., it argues that President Obama’s decision to cancel the Keystone XL Pipeline violated NAFTA by expropriating the company’s expected future profits.

As the Keystone example suggests, Canadian companies frequently use the investment courts system and the government of Canada vehemently defends maintaining ISDS in NAFTA. A group of U.S.-based companies also sent a letter to the Trump Administration asking him to support keeping ISDS. Mexico supports keeping ISDS in NAFTA. Some analysts speculate the ISDS makes Mexico more attractive to investors. With this pushback, the U.S. is now floating making joining the ISDS optional. Canada and Mexico will likely oppose this proposal, too. Civil society advocates in all three countries, including the Maryknoll Office for Global Concerns, are campaigning to end ISDS.

There are plans to add modern environmental and labor standards directly into the agreement that would reflect the deal worked out in 2007 between President Bush and the Democratic-controlled Congress. While on paper many of these provisions are good, in practice, there is little political will to hold governments accountable when they fail to follow the international labor and environmental laws included in the agreement.

In July, the first labor dispute case under the 2007 trade provisions was decided. U.S. and Guatemalan labor unions brought forward the dispute against the government of Guatemala under the Central America Free Trade Agreement. The unions claimed Guatemala was not upholding international labor standards. The court ruled in favor of Guatemala, stating that there was no evidence that labor violations were affecting trade.

If decisions by investor courts are determined by effects on international trade rather than effects on workers, the provisions do not represent the vision of trade that serves the common good. To see our full trade vision, read the latest issue of our Faith Economy Ecology newsletter, Encounters, at http://bit.ly/2eMzB74 .

The renegotiation process for NAFTA is even less transparent than that used to craft the TPP. There are no stakeholder sessions planned and all parties have agreed not to divulge the text. The public is virtually in the dark. Read our statement calling for transparent NAFTA renegotiations that serve the common good at http://bit.ly/2wZ3SKr .

Even with renegotiations underway, President Trump continues to threaten to withdraw from NAFTA altogether. On August 28, he told reporters he may need to put the U.S. on the brink of withdrawing from NAFTA to get his renegotiation objectives met. Any NAFTA party can pull out of the agreement with six-months’ written notice. Legal experts are researching whether or not this is even possible without Congressional approval.

Faith in Action: Tell Congress and the Trump Administration to negotiate the NAFTA we need, not the same broken trade model that puts corporations before God’s people and all creation. http://bit.ly/2wueDlb

Photo: "NAFTA is the criminal" protest sign at demonstration in Washington, D.C. in 2006. Photo by Jim Winstead/Flickr.