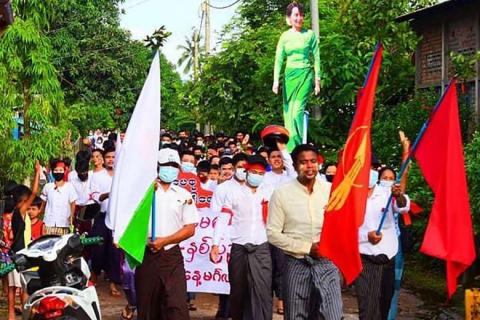 UCANews reported on June 21 that Pope Francis echoes calls by Myanmar bishops to respect religious sites as places of sanctuary: https://bit.ly/3qzvL57. This article was reprinted in the July-August 2021 issue of NewsNotes.

Pope Francis has appealed for aid for thousands of displaced people who are facing starvation in Myanmar after fleeing from their homes as fighting escalates in the beleaguered country.

During his Sunday Angelus on June 20, the pope joined bishops in Myanmar who have appealed for humanitarian corridors to allow safe passage for those fleeing.

He said Myanmar bishops last week launched an appeal “calling to the attention of the entire world, the heart-wrenching experience of thousands of persons in that country who are displaced and are dying of hunger.”

Echoing the bishops, the pope pleaded for respecting religious sites as places of sanctuary. “Churches, pagodas, monasteries, mosques, temples, just as schools and hospitals, are respected as neutral places of refuge.”

The pope also prayed for peace in the conflict-torn nation which has been in turmoil following the military seizure of power on Feb. 1 after overthrowing elected civilian leaders including Aung San Suu Kyi.

Daily protests and a peaceful civil disobedience movement have challenged the junta, which is struggling to control the country nearly five months after the power grab.

The junta is trying to repress the people with a reign of terror which has sparked resistance from local resistance groups known as the People’s Defense Forces (PDF).

Pope Francis has spoken several times about the crisis in Myanmar, which he regards with much affection after visiting the country in 2017.

He has repeatedly called for military leaders to stop the violence, release all detained people and pursue dialogue to seek peace.

The pope’s comments came on World Refugee Day, designated by the United Nations with the theme “Together we heal, learn and shine.”

“Let us open our hearts to refugees and share in their sorrows and joys, and learn from their courageous resilience to become a more humane community, one big family,” the pope said.

Cardinal Charles Bo of Yangon has asked for a period of intense prayer, to “enter the battlefield of prayer, become prayer warriors.”

“We are like the disciples, tossed in the stormy seas of man-made disaster: of unending war, anguished displacement, inflicted starvation, death, detention and despair,” Cardinal Bo said in a homily on June 20.

“Let us pray for all those who perished in this crisis, those in prison, those who disappeared, those who lost everything, those displaced, those homeless. We need to support each other with prayer, with food, with visits.”

On June 18, the United Nations General Assembly called for a stop to the flow of arms to Myanmar and urged the military to release political detainees including deposed leader Suu Kyi and to respect the results of the November 2020 elections.
Myanmar’s junta rejected the UN’s resolution, which is not legally binding, as being “based on one-sided sweeping allegations and false assumptions.”

More than 175,000 people have been displaced in Kachin, Karen, Chin, Kayah and Shan states — predominantly Christian areas — due to the escalation of hostilities between the military and ethnic armed groups and the PDF since the coup.

At least 872 people have been killed by security forces since the coup, mostly anti-coup protesters.

Faith in action: Sign a petition to ask governments and companies across the globe to join together and end the oppression by the military in Myanmar: https://bit.ly/3wYEiRi
Follow updates from Amnesty International on the passage on June 18 of a UN resolution to impose a global arms embargo on Myanmar to bring an end to the violence on peaceful protestors by Myanmar security forces: https://bit.ly/3zXtwMX