Myanmar: Next Steps After the Coup 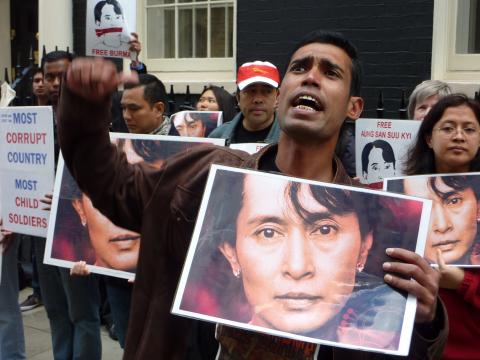 Activists in Myanmar and advocates abroad push for three actions to save the democracy after the military coup on Feb. 1. This article was published in the March-April 2021 issue of NewsNotes.

On February 1, military leaders in Myanmar, the Southeast Asian country formerly known as Burma, orchestrated a coup, arresting Noble laureate Aung San Suu Kyi and other elected officials, after their pro-democracy party won the vast majority of seats in parliament in the November election. Claiming electoral fraud and demanding a new election, the military has declared a year-long state of emergency and appointed Army General Min Aung Hlaing the country's de facto leader.

The UN Security Council failed to agree on a joint statement regarding the situation in Myanmar after China did not support it. China has the power of veto as one of five permanent members of the council. The UN's Special Envoy on Myanmar, Christine Schraner, has strongly condemned the military takeover, saying the country risks sliding back into prolonged military dictatorship, international isolation, and suppression of human rights. Amazingly, on Feb. 26. Myanmar's UN rep. Kyaw Mon Tun spoke out against the coup on Feb. 26, making a three-finger protest salute.

Since the coup, tens of thousands of people in Myanmar, including Catholics, have joined peaceful protests throughout the country. Many government workers are on strike, refusing to cooperate with the military and demanding that democracy be restored. In response, the military has ordered social media and internet blackouts, and used violence against peaceful demonstrators, with at least twenty deaths.

On Feb. 10, President Joe Biden said he will sanction the military leaders in Myanmar who directed the coup, to pressure them to relinquish power and release the coup’s prisoners. Other countries have also issued export controls and targeted sanctions against Min Aung Hlaing and his top generals. Aung San Suu Kyi remains under house arrest.

Despite controversy over the impact of sanctions in the past, some leading human rights activists on Myanmar support their use in this case. According to a Burmese-American activist working with the Global Movement for Myanmar Democracy, human rights activists met in mid-February and settled on three advocacy asks, which include targeted sanctions.

Present at these talks were Burmese activist Wai Wai Nu; Scot Marciel, former U.S. ambassador to Myanmar; Simon Billennes of the International Campaign for the Rohingya; Mark Farmaner of Burma Campaign UK; and international lawyers who worked on the legal battle for the release of Aung San Suu Kyi from house arrest in 2010.

The first advocacy ask is for countries to impose targeted sanctions on individual military leaders and the two top military conglomerates, Myanmar Economic Corp (MEC), and Myanmar Economic Holdings Limited (MEHL). “The United States needs to target the entirety of the military's vast economic interests, from the multibillion-dollar jade and gemstone industry, to its significant stakes in banking, real estate and alcohol businesses,” said Paul Donowitz of Global Witness.

“At the same time, the U.S. must avoid imposing broad, sectoral sanctions that were in place until 2016,” Donowitz continues, “which risk disproportionately harming civilians who were already facing increased economic hardship due to the pandemic and whose situation is likely to worsen under renewed military rule.” This was a concern of the human rights activists at the meetings to determine the three advocacy asks. Some suggested the United States adopt a 180-day term for targeted sanctions to monitor their impacts and make adjustments before renewal.

“Militaries tend to be more interested in extracting revenue to fund repression than in developing the economy. Time to sanction the junta's businesses,” tweeted Kenneth Roth of Human Rights Watch. In the last week of February, the World Bank suspended withdrawals by the Myanmar junta in response to the coup and Facebook announced that it has banned Myanmar’s military and military-controlled state and media entities.

More targeted sanctions might come from Congress. Sen. Ben Cardin of Maryland, author of the Burma Human Rights and Freedom Act in 2019, could update the language to include targeted sanctions of the military leaders and the MEC and MEHL. Sen. Cardin and Sen. Todd Young of Indiana introduced a resolution condemning the military coup just days after it started.

The two other advocacy asks are for the UN Security Council to adopt a global arms embargo, and to make a referral to the International Criminal Court. Both are long, difficult asks because under current conditions, China would veto any such resolution, given its extensive economic and political relations with Myanmar.

The power of the ICC to prosecute may be the only thing General Min Aung Hlaing fears. In 2018, the ICC ruled that it has jurisdiction over Myanmar’s forced expulsion of the Rohingya to Bangladesh as a possible crime against humanity.