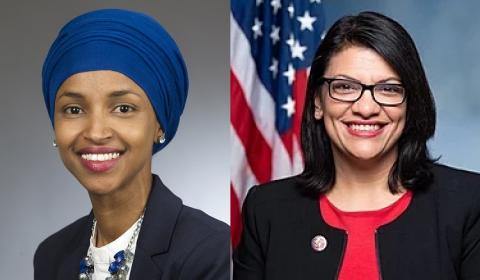 The debate within U.S. political parties over Israel’s treatment of Palestinians continues as critics charge two new Muslim members of Congress with ‘anti-Semitism.’  The following article was published in the March-April 2019 issue of NewsNotes.

The unprecedented number of women in the incoming Congressional class of 2019 includes Democrats Ilhan Omar of Minnesota and Rashida Tlaib of Michigan, the first Muslim women to serve in Congress (the first Muslim man being Rep. Keith Ellison, also from Minnesota). In their short time in Congress Palestinian-American Tlaib and Somali-American Omar have already come under intense scrutiny from both sides of the political spectrum for their criticism of the government of Israel, pushing the limits of acceptable political discourse on the subject.

Tlaib and Omar are the only House members to have stated their support for the Boycott, Divestment and Sanction (BDS) movement, an international campaign aimed at compelling the Israeli government to end the occupation of Palestine through economic pressure. Both have been called “anti-semitic” for taking such a controversial stance, which some equate to a declaration that Israel does not have the right to exist.

Rep. Lee Zeldin (R-NY) went so far as to call Tlaib and Omar out by name in a Resolution co-sponsored by 95 of his Republican colleagues named, “Rejecting anti-Israel and anti-Semitic hatred in the United States and around the world.”

In response to criticism, both Tlaib and Omar released statements defending their positions on Israel and BDS: “This respect for free speech does not equate to anti-Semitism”, said Rep. Tlaib.  Rep. Omar stated, “I will never apologize for standing up against oppression and injustice in Israel or anywhere else.”

Legislation to outlaw the practice of BDS in the U.S. has spread quickly in recent years. As of November 2018, 26 states passed anti-BDS laws and in January 2019 the Senate passed the Combatting BDS Act of 2019—providing legal coverage for states to implement their anti-BDS legislation despite concerns voiced by groups such as the ACLU who deem such laws unconstitutional. Although the Combatting BDS Act of 2019 passed in the Senate with a vote of 77-23, it is worth noting that five of the current Democratic presidential candidates voted against it and only one voted in favor—perhaps an indication of the shift in public opinion away from unconditional support of Israel and in favor of challenging the ongoing occupation of Palestine. Despite its popularity among lawmakers, a recent Google survey found that 74 percent of responders were opposed to anti-BDS legislation and only 22 percent were in favor.

Further stoking cries of antisemitism—this time from her own party—Omar insinuated in a tweet on February 10 that American politicians were influenced by the lobbying group American Israel Public Affairs Committee (AIPAC) to take pro-Israel positions because of financial contributions. Democratic leaders, including Speaker of the House Nancy Pelosi, publicly denounced Omar’s comment as an “anti-Semitic trope” in a joint statement, prompting Omar to apologize for her insensitivity while also defending her view of the “problematic role of lobbyists" in U.S. politics. “It’s gone on too long and we must be willing to address it, Omar said.

Further pushing the status quo of acceptable behavior in Congress, Tlaib and Omar have both announced that they will not join an AIPAC tour to Israel later this year, a trip seen as a rite of passage for incoming members of Congress. Palestinian Tlaib instead intends to organize her own delegation to Palestine.

Rep. Eliot Engel (D-NY), chairman of the Foreign Affairs Committee, when asked to respond to Rep. Tlaib’s announcement of her plans, said “instead of [Tlaib] talking about things, she’s new here, she ought to listen and learn and open her mind and then come to some conclusions.”  Rep. Tlaib’s response was to invite Rep. Engel to join her trip to Palestine, where her grandmother still lives in the West Bank.

Maryknoll Office for Global Concerns is working with interfaith partners in Washington, D.C. to support Rep. Tlaib in her efforts to organize a congressional delegation to Palestine.

Faith in Action: Ask your Members of Congress to amend the Anti-Terrorism Clarification Act so that Palestinians can continue to receive humanitarian aid.  http://bit.ly/Aid4Palestine