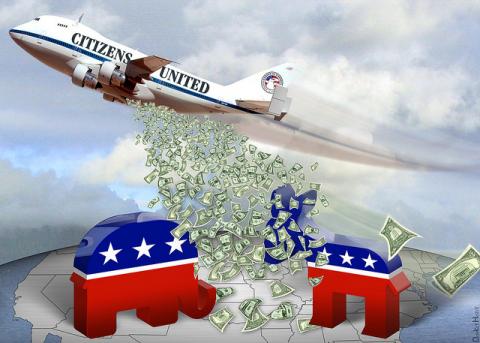 The following article appeared in the September-October 2013 issue of NewsNotes and was prepared by Cathy Rowan.

The U.S. Supreme Court’s decision on Citizens United vs. Federal Election Commission swept away restrictions on the amount of money corporations could spend to influence campaigns, leaving decades of precedent in disarray. For many years, socially responsible investors have called for greater corporate transparency and accountability in regards to corporate political spending and lobbying expenditures. Some companies are beginning to respond to this call.

The International Corporate Governance Network, a membership organization of large institutional investors based in 50 countries, states: "It is a matter of good corporate governance for companies to ensure that any political involvement is both legitimate and transparent, and that companies and their boards are held properly to account for their political activities."

From 2004-2011, around 270 shareholder proposals regarding disclosure of political activity and policies related to lobbying and political contributions were filed, with an average of 30 percent of shareholders voting in support.

Since Citizens United, the issue of corporate money and politics has become a greater priority for shareholders. In 2013 alone, 50 shareholder proposals were filed, with 40 scheduled to come to a vote. The proposals asked companies to report annually their federal and state lobbying expenditures, including any payments to trade associations used for lobbying, as well as support for tax-exempt organizations that write and endorse "model legislation" for legislators to use.

The editorial page of the Wall Street Journal has attacked the investor campaign. The heads of the three largest trade associations -- the U.S. Chamber of Commerce, the Business Roundtable and the National Association of Manufacturers -- sent a letter to their members opposing lobbying disclosure, claiming the goal of proponents "is to get companies to disclose substantial information about government relations activities in order to limit those activities." According to the Center for Responsive Politics, since 1998, the Chamber has spent over $1 billion for lobbying. In 2012, the Chamber spent $136.3 million to influence government policy. Lobbying by trade associations is indirectly supported by substantial, and largely unreported, corporate contributions.

Shareholders are particularly concerned about corporations’ support of the American Legislative Exchange Council (ALEC), which, according to its website "works to advance the fundamental principles of free-market enterprise, limited government, and federalism at the state level through a nonpartisan public-private partnership of America’s state legislators, members of the private sector and the general public." It endorsed as "model legislation" Florida’s "Stand Your Ground" law and drafted model Voter ID bills.

ALEC also developed legislation and resolutions for legislators to use that oppose the U.S. Environmental Protection Agency’s ability to legislate carbon dioxide emissions; oppose state agencies’ abilities to regulate carbon emissions; and support state authorization to open federal public land for oil, gas and coal exploration. At its annual conference in August 2013, ALEC joined its partner, the Heartland Institute, whose president has asserted that there is "no global warming trend" in hosting a climate change workshop. One participant, Rep. Mark Pocan, a progressive Wisconsin Democrat who has attended ALEC meetings in order to report on its dealings, said that ALEC lawmakers were told that because the amount of carbon dioxide and the average human lifespan had increased during the past century, "therefore" increased CO2 is a good thing. Top corporate sponsors of the conference include ExxonMobil, Peabody Energy, TransCanada, Eli Lilly and Wells Fargo.

Shareholders who question corporate financial support of ALEC are beginning to see results. Since 2011, over 50 companies have left ALEC or have said they are no longer involved. These include GlaxoSmithKline, ConocoPhillips, Johnson & Johnson, Amazon, Unilever, WellPoint, Darden Restaurants, Pepsico, Coca-Cola, General Electric, Walgreens, CVS/Caremark, Kraft Foods, McDonalds and Bristol-Myers Squibb. Some of these companies have set corporate goals to reduce their own greenhouse gas emissions, and have seen the contradictions in supporting organizations that challenge measures to address climate change.

Shareholder pressure also has led to companies like Ameren, Deere & Co and Dow to publish the portion of their payments to trade associations that go toward lobbying.

In July 2013, 65 percent of Alliant Tech’s shareholders voted in favor of a proposal for greater transparency in lobbying activities. The lead proponent, Rev. Michael Crosby of the Midwest Capuchin Franciscans, said that his order "has been very concerned for over a decade with some of the businesses of Alliant Tech, particularly land mines, as this is a weapon that continues to kill and maim innocent people around the world. This concern is only exacerbated when the company moves into guns and then lobbies heavily to thwart legislation that would regulate their use."