Militarization of the Middle East 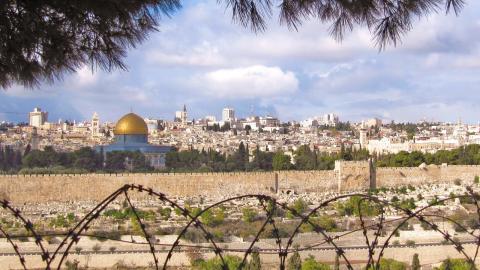 The Faith Forum on the Middle East, of which the Maryknoll Office for Global Concerns is a member, was scheduled to send the following letter to all Members of Congress on March 6, 2018. The following article was published in the March-April 2018 issue of NewsNotes.

As Christian denominations and faith-based organizations working in and concerned about the Middle East, we write to express our serious concern regarding increasing U.S. arms sales and military aid to the Middle East.

In FY2017 the amount of U.S. arms sales approved worldwide was a record-high $75.9 billion, doubling that of the previous year. Of these approved sales, $52 billion were to countries in the Middle East. A Congressional Research Service report notes that “the United States is the single largest arms supplier to the Middle East and has been for decades.”

These sales are lucrative for U.S. defense corporations, and purportedly promote U.S. security interests, but they come at a steep cost. As a result of our organizations’ long-term relationships and engagement throughout the Middle East, and our longstanding commitment to justice, peace, and security for all, we know all too well the price that the people, especially civilians, have paid and continue to pay for the ongoing conflicts that are fueled by these arms sales.

In Syria, Iraq, Yemen, Palestine and Israel, Libya and elsewhere, thousands of civilians have died with countless more wounded. More people are displaced worldwide than at any other time since World War II. Basic infrastructure such as roads, water and electrical systems have been destroyed and young people are growing up with trauma and fear. Sadly, these conditions, coupled with the high volume of weapons that will remain long after a conflict ends, will lead to instability and insecurity for generations to come. No amount of corporate profits or so-called “security interests” can possibly be worth this.

The United States provides more than $8.5 billion in military and security assistance to the Middle East and North Africa, with most of it going to Israel, Iraq, Egypt and Jordan. Among these countries, peace treaties already exist between Israel and Egypt, and Israel and Jordan. U.S. assistance to this small geographical region represents more than half of all U.S. military assistance worldwide. Countries such as Israel and Saudi Arabia already rank among the highest spenders worldwide per capita on their militaries, and Israel is not only a recipient of U.S. military aid but is also an arms exporter.

We firmly believe that stability and long-term security in the Middle East will only come about when the United States and other countries move away from a militarized approach and the profits that come from perpetual conflict. In the meantime and at a minimum, we strongly recommend the following steps:

The continued provision of aid and arms to the countries of the Middle East, it has been clear, does not result in greater peace, but rather greater conflict, casualties, and loss of life.  The U.S. has not advanced its own security or interests through military aid or arms sales.

More than 50 years ago, Congress enacted the Arms Control and Disarmament Act, which says that, “An ultimate goal of the United States is a world which is free from the scourge of war and the dangers and burdens of armaments; in which the use of force has been subordinated to the rule of law; and in which international adjustments to a changing world are achieved peacefully.” We urge you to do all that you can to make this vision a reality.