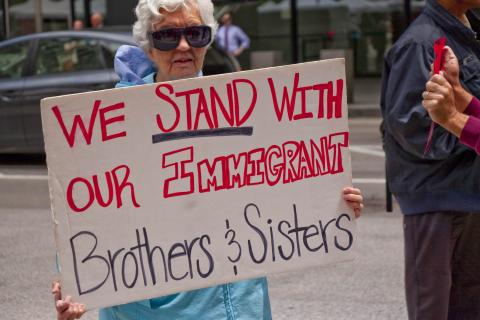 Scott Wright, Director of the Columban Center for Advocacy and Outreach, wrote the following article which is reprinted here with permission. This article was published in the May-June 2021 issue of NewsNotes.

This week, the Biden administration completes the first 100 days of its administration. While there are many things to celebrate, and many bold initiatives, we continue to be concerned about migrants, refugees, and the situation on the border.

Recently, the White House Press Secretary announced that the Biden administration had reached agreements with the governments of Mexico, Honduras, and Guatemala to secure their borders: “We've secured agreements for them to put more troops on their own border. Mexico, Honduras and Guatemala have all agreed to do this. That not only is going to prevent the traffickers, and the smugglers, and cartels that take advantage of the kids on their way here, but also to protect those children.”

This signals a dangerous reversal of the Administration’s promise to pursue a more just and compassionate response to migrants and refugees by rebuilding the asylum system, uniting families, treating asylum-seekers with dignity and compassion, and addressing root causes of migration.

Instead of building a wall on the U.S.–Mexico border, such a policy would effectively build “walls” on the very borders of countries from which people are desperately fleeing from violence, hunger, and disasters.

The reality is this: we cannot reverse decades of U.S. support for corrupt, violent and authoritarian governments in the region, or ignore U.S. policies that favor corporate greed and privatization of resources, in time to stem the tide of those who are desperately fleeing for their lives. Until we can effectively do so, and that will take time, we have a moral obligation to respond to the migrants and refugees who are desperately fleeing.

These are dramatic times for migrants and refugees. More people are crossing borders or forcibly displaced from their homes than at any time in recent history, at least since the end of the Second World War.

For millions of people throughout the world, one’s place in the human family is defined by events beyond their control. Overnight, but often over weeks and months of violence and hunger, you wake up one morning to a new reality. You struggle to survive and protect your family, migrating from one place to another, crossing a border to become a refugee in search of asylum. Are you a migrant, a displaced person, a refugee, an asylum-seeker? Who are you?

Four years ago, Pope Francis launched a global campaign to support migrants and refugees called “Share the Journey.” The aim of the campaign is to promote a culture of encounter with migrants and refugees, as they journey from their homes, through foreign lands in search of refuge, until they reach a land they hope will welcome them.

According to the United Nations High Commissioner on Refugees (UNHCR), the number of forcibly displaced persons in the world surpassed 80 million in 2020, one percent of the world’s population. Of these 80 million, 29.6 million are refugees, and 45.7 million are internally displaced; 4.2 million are asylum-seekers.  Eighty-five percent of the forcibly displaced come from countries where there is acute food insecurity and malnutrition, and many are fleeing from authoritarian regimes, failed states, violence and war.

But the most invisible of these, and also the most numerous, are the internally displaced persons (IDPs). In his message last September on the World Day of Migrants and Refugees, Pope Francis chose to focus on their plight. Unlike refugees who are granted international protection, IDPs “are victims of undemocratic political systems and environmental disorder which leads to hunger, war, and violence.” In the words of Caritas Internationalis Secretary General Aloysius John, “They are among the most vulnerable people on the planet, yet they are denied their basic right to live a dignified life.”

But what about us? Where are we in this global picture? We claim to live in “a nation of immigrants,” we take pride in the words at the base of the Statue of Liberty, “Give me your tired, your poor, your huddled masses yearning to breathe free,” but have we forgotten who we are? Do we not have a moral obligation to welcome those who come after in search of refuge?

Pope Francis’ words are a good reminder: “This is not a time for forgetfulness.” Let us remember who we are as a people, and welcome those who are suffering from the consequences of our indifference and greed.

Faith in action: Urge President Biden to end the use of Title 42 health authority to immediately expel asylum seekers at the U.S.-Mexico border: https://bit.ly/3xJchxR

Scott Wright is the Director of the Columban Center for Advocacy and Outreach, the Justice, Peace and Ecology office for the U.S. Region of the Missionary Society of St. Columban. He worked for eight years with refugees and displaced communities through Caritas and the Catholic Church in El Salvador during the civil war in the 1980s.