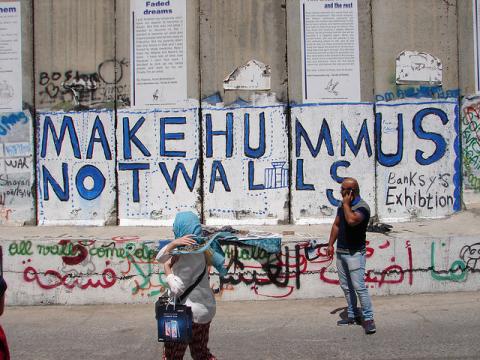 The six featured articles in this issue of Middle East Notes focus on the United Nations Human Rights Council’s (UNHRC) recent report on last summer’s fighting between Israel and Hamas, along with support and criticism of the report’s allegations, plus news about efforts to raise Israel's human rights violations at the International Criminal Court, and the release of the U.S. State Department's 2014 report on human rights. Links to additional articles are also included. (Photo of separation wall in Bethlehem, West Bank, by Johnny Zokovitch, Pax Christi USA)

Commentary: The United Nations Human Rights Council decided to adopt a resolution condemning Israel based on its report on Operation Protective Edge in Gaza. Forty one countries voted in favor of the resolution, while one country – the U.S. – voted against. Evidence and arguments were handed over to the International Criminal Court at its headquarters in The Hague covering three areas of Israeli violations under international law: the summer war in Gaza in 2014, settlements in East Jerusalem and the West Bank, and issues relating to Palestinian prisoners. The Country Reports on Human Rights Practices for 2014 published by the U.S. State Department on June 25 criticizes Hamas but especially Israeli actions in the West Bank and Gaza, citing alleged “excessive use of force against civilians, including killings; abuse of Palestinian detainees, particularly during arrest and interrogation.”

The UN Report, the evidence given to the ICC for consideration of Israeli war crimes, and the U.S. Country Report on Human Rights all fault Israel for its actions during the 2014 Gaza war and for its treatment of Palestinians in Israel, the West Bank, East Jerusalem and Gaza. Israel’s persistent rejection of these criticisms and its refusal to change policies towards the Palestinians continue to erode international support.

To the relief of Israel and the chagrin of many others, the UN report into last summer’s war in Gaza is not an indictment of Israel. It does not declare conclusively that Israel committed war crimes and it is certainly not one-sided.

The Human Rights Council report released on Monday is valuable, nevertheless, when read as a preview of what might transpire in a much more consequential body investigating the 2014 war — the International Criminal Court. …

Ironically or not, the question of whether war crimes were actually committed is not the most significant factor that will determine whether the ICC launches any criminal investigations or hands down indictments on Gaza. Certainly, without suspected war crimes there would be no investigations or indictments. But in order for the ICC to have jurisdiction over suspected crimes in the first place, certain conditions must be met — first and foremost, a concept called complementarity.

Complementarity means that if Israel investigates its own soldiers for suspected violations of international law, and if it does so in good faith, then the ICC has no jurisdiction. But once the ICC believes that Israel is unwilling or incapable of investigating itself then it may indeed have jurisdiction over war crimes committed by its citizens. …

From a cursory review, one might be tempted to conclude that the UN report indicates Israel is not sufficiently fulfilling complementarity, thus increasing the risk of the ICC jurisdiction. Indeed, in its conclusions, the report expresses “[concern] that impunity prevails across the board for violations of international humanitarian law and international human rights law allegedly committed by Israeli forces.” …

… The UN report also did not tell us anything new about Israel’s response. There was no need to publish it to know the scope of unreceptiveness and denial within Israeli society, the low level to which the Israeli media stooped in finally allowing itself to become an agent of propaganda, and the lack of interest that all this killing and destruction in Gaza arouse in Israel. We have known all that for a long time. …

If in the wake of this commission, too, the international community does not take practical steps against war criminals, then there is no further reason for commissions. The next war; the next commission; the next Israeli attack on Gaza will certainly come, and it will be more vicious than the previous one, with McGowan Davis or without her. …

An Australian judge, a South African professor and a Belgian prosecutor will establish a commission of inquiry, Israel will once again boycott it and in Gaza thousands of bereaved families will once again sit under the ruins of their homes and wail helplessly at the international community, which was supposed to protect them — and instead it establishes commissions.

… The investigation committee bent over backwards to be “balanced,” and accused both the Israeli army and Hamas in almost equal terms. That, in itself, is problematic.

This was not a war between equals. On one side, the State of Israel, with one of the mightiest armies in the world. On the other side, a stateless population of 1.8 million people, led by a guerrilla organization devoid of any modern arms. Any equating of such two entities is by definition contrived. Even if both sides committed grievous war crimes, they are not the same. Each must be judged on its own (de)merits. …

Even so, a number of international conventions prohibit war crimes that target civilian populations or hurt the population in occupied territories. That was the mandate of this committee of investigation. The committee castigates Hamas for committing war crimes against the Israeli population. Israelis didn’t need the committee to know that. A large share of Israeli citizens spent hours in shelters during the Gaza war, under the threat of Hamas rockets. …

If they are brought before the International Court in The Hague, the Hamas leaders will argue that they had no choice: they had no other weapons to oppose the Israeli invasion. As a Palestinian commander once told me: “Give us cannons and fighter planes, and we will not use terrorism.” The International Court will then have to decide whether a people that is practically under an endless occupation is allowed to use indiscriminate rockets. Considering the principles laid down by de Groot, I wonder what the decision will be. …

The case against the Israeli government and army is quite different. They have a plentitude of arms, from drones to warplanes to artillery to tanks. If there was a cardinal war crime in this war, it was the cabinet decision to start it. Because an Israeli attack on the Gaza Strip makes war crimes unavoidable. …

The United Nations Human Rights Council’s (UNHRC) report on last summer’s fighting between Israel and Hamas came out on June 15. Before the ink on it was even dry, the Israeli government was condemning it as biased, and accusing the UN of trying to prevent Israel from defending itself. The allegations, both against Israel and by Israel against the report, are very familiar and very serious. We need to consider soberly the points raised by the UNHRC report as well as the rebuttals Israel has made. …

The report is not flawless; it never could be, given the fact that neither Israel nor Hamas cooperated with the investigation. The report, for example, places blame on Israeli commanders who were forbidden by their government to testify as to what information they did or did not have regarding conditions on the ground in Gaza. The conclusions, based on the information the investigators were granted, were strong, but the absence of the testimonies of Israeli commanders obviously compromises the conclusions. …

The report discomfits Israeli leaders even more by suggesting that there are serious questions of policy, including the policy of the civilian government in the conduct of the war raised by the Gaza war. However, Israel does itself no favors by trying to bury the report rather than confront these questions. If the conduct of this war was defensible, Israel is more than capable of working with its allies to establish that fact in a transparent and credible investigation. That Israel chooses not to do so and that the United States helps it avoid such important questions only diminishes Israel’s standing in the world, and continues the erosion of the values that most Israelis hold dear. …

… The dossier is organized into sections, one for each of the 23 counts against Israel. Aside from asserting that Israel has violated the United Nations definition of “Apartheid,” Jabarin said the report also names specific crimes such as the “targeting of civilians” in Gaza, and violations of rights to due process for Palestinian detainees held in Israeli prisons who are then prosecuted under Israeli military code. …

The evidence used to support each of the Palestinian claims is sourced from field investigations by the Palestinian government, and reports published by the human rights groups Al Haq, Human Rights Watch and Amnesty International. Surprisingly Jabarin indicated the United Nations Human Rights Council’s (UNHRC) report published Sunday outlining “possible war crimes” committed by Israel and Hamas was not included, despite Palestinian leaders stating repeatedly over the past few months that they would courier a copy to the ICC. Even so, the court has the ability to solicit their own research materials including ordering the UN report. …

A new report by the U.S. State Department published on Thursday criticizes Israeli actions in the West Bank and Gaza, citing alleged “excessive use of force against civilians, including killings; abuse of Palestinian detainees, particularly during arrest and interrogation.” …

Other claims about Israel’s human rights violations in the West Bank and Gaza include “austere and overcrowded detention facilities; improper use of security detention procedures; demolition and confiscation of Palestinian property; limitations on freedom of expression, assembly, and association; and severe restrictions on Palestinians’ internal and external freedom of movement.” The report also noted violence by settlers against Palestinians was a persistent problem, as well as “inconsistent punishment of these acts by Israeli authorities.”

The report also addresses Israel’s restriction on travel for Palestinians in the West Bank, saying it “affected virtually all aspects of life, including access to places of worship, employment, agricultural lands, schools, and hospitals, as well as the conduct of journalistic, humanitarian, and NGO activities.” …

Regarding Hamas, the report says human rights abuses under its rule included “security forces killing, torturing, arbitrarily detaining, and harassing opponents, including Fatah members, and other Palestinians with impunity,” launching rockets at civilians from civilian areas, poor prison conditions and public executions without trial, limiting the freedoms of speech, press, assembly, association, religion, and movement, abuse of women and children, discrimination based on sexual orientation, and forced labor, including by children. …

Other articles of interest

Support for the two state solution decreases among Palestinians and Israelis, Palestinian Center for Policy and Survey Research, June 23, 2015

The Forgotten War: A year since Gaza -- One year after Operation Protective Edge, Ha’aretz sends its top writers to examine what has changed since the 50-day conflict between Israel and Hamas, and to ask whether – or when – the next war will erupt. Links are provided to nine Ha’aretz articles about the “forgotten war.”

The settlements are not part of Israel, Ha’aretz editorial, July 2, 2015