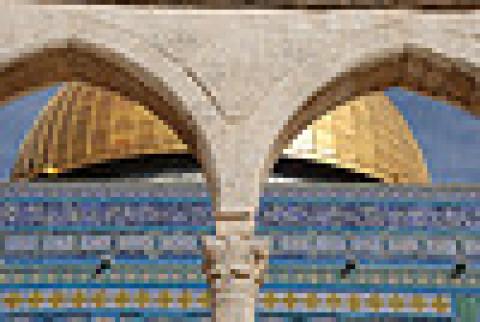 The six featured articles and the related links in this issue of the Middle East Notes focus on Pope Francis’ renewed appeal for a two-state solution to the Israeli-Palestinian struggle, and denouncement of the "occupation" of Middle East lands and the weapons trade that fuels the region's wars; decades of Zionism’s control of the Israeli governments that brought great accomplishments but now has led to a dead end; objections to the Jewish Nation State Bill; accusations that this bill makes the reality of Israeli apartheid explicit and official; disruption of Birthright program tours by U.S. Jewish young participants requesting more contact with Palestinians; detailed arguments stating that Israel has no legal right to use any kind of force in Gaza; and links to recent CMEP Bulletins.

Commentary: When referring to Israel/Palestine, most western media sources now use the Israeli preferred and publicized term “conflict” to cover all aspects of this political, social, economic and human tragedy. “Conflict” is not an appropriate term for this struggle between parties since it implies two equal parties in dispute with one another. Use of this word both obfuscates the “facts on the ground” that the overwhelming majority of human lives being destroyed are Palestinian, and also the reality of a total disproportionality of destructive, illegal and immoral actions by one of the two parties: the Israeli Government with all its military, legislative, economic and social structures used to control, oppress and repress Palestinian people. For example, Gaza young people using incendiary kites to burn Israeli farm land is not the equivalent to Israeli planes and tanks bombarding Gaza’s populated areas. Palestinian opposition to settler colonial control of all the land and population between the Mediterranean and the Jordan by Israel is not a conflict but a struggle for survival of one people being dispossessed by another.

“Pope Francis on Saturday (7/7/18) denounced the ‘murderous indifference’ that has allowed violence to consume the Middle East and drive tens of thousands of Christians from their homes, calling out global powers for seeking power and profit at the expense of the region's people during a remarkable gathering of Orthodox patriarchs and Catholic leaders.” …

… “Israel is a one-idea society, and always has been. Like Iran, North Korea or the Soviet Union, without the terror regimes and the blood. With the appearance of debate, but the kind whose boundaries are determined in advance and which revolves solely around 50 shades of the ruling ideology. With the appearance of freedom and democracy, but with absolute delegitimization — and lately, even criminalization — of different thought. The noise of a lively, contentious society, but solely over the shade that will rule it, not the color. The color will remain the same, that much is clear. It’s called Zionism, and it is a devastating ideology.” …

See also:
To Israelis a Child Is a Child, Unless He Is a Palestinian, Haaretz, Assia Ladizhinskaya  and Eitan Diamond , July 4, 2018
The Colonization of Palestine: Rethinking the Term ‘Israeli Occupation’, Ramzy Baroud, Counterpunch, June 8, 2018

“The Knesset passed early Thursday (7/19/18) a controversial bill that officially defines Israel as the national homeland of the Jewish people and asserts that "the realization of the right to national self-determination in Israel is unique to the Jewish people," with 62 lawmakers voting in favor of the legislation and 55 opposing it. Two lawmakers, Benny Begin (Likud) and Orly Levy-Abekasis (independent) abstained.

“The nation-state law also includes clauses stating that a ‘united Jerusalem’ is the capital of Israel and that Hebrew is the country's official language. Another says that ‘the state sees the development of Jewish settlement as a national value and will act to encourage and promote its establishment and consolidation.’”…

“Here is a podcast of an interview I did yesterday for South Africa’s Salaamedia on the Jewish Nationality Law that has just passed. It makes the reality of Israeli apartheid explicit and official. No longer should we debate whether an apartheid regime rules between the Mediterranean and the Jordan Valley. It does.

“But what I explain in this interview is that the Jewish Nationality Law is simply the declaration, the cherry on top of the apartheid sundae. It formally declares Israeli apartheid, but it rests on a whole range of laws and regulations that give it substance, laws that have been passed in recent years by the Netanyahu government and laws soon to be passed.”…

“My Birthright guide's supremacist stance was extreme. But the program's claim to be 'apolitical' is not only demonstrably untrue; it frames every critical, inquisitive Jewish millennial who wants to meet Palestinians as Israel-haters.”…

“After the five Birthright participants left their trip, a Haaretz headline declared, "Between Adelson and BDS, Birthright has become a political battlefield." But Birthright does not have to choose between the hard-right agenda of the Trump-Netanyahu-Adelson alliance or the BDS camp.

“It can choose instead to meet young American Jews where they are: deeply connected to Israel, but also concerned for its Palestinian neighbors, who do not yet share the freedom Israelis enjoy.” …

“Since the overwhelmingly nonviolent demonstrations in Gaza began on March 30, 2018, the international community has strongly condemned Israel’s armed attacks. (N.B.  Protests in Gaza are now entering their fifth month. Israel have now killed at least 140 Palestinians taking part in the 'Great March of Return', and wounded a further 16,000.)

“Welcome as these condemnations are, the question nonetheless remains whether they go far enough. Simply put, does Israel have the right to use any force under any circumstances against the people of Gaza?

“The current legal debate has focused on a pair of interrelated questions:

“Did Israeli snipers resort to “excessive” or ‘disproportionate’ force against demonstrators (as critics allege), or was the amount of force they deployed necessary to prevent protesters from breaching the perimeter fence (as Israel alleges)?

“But the fact is, Israel cannot claim a right to use any force in Gaza — whether moderate or excessive, proportionate or disproportionate; whether protesters are unarmed or armed, don’t or do pose an imminent threat to life. If it appears otherwise, that’s because the current debate ignores critical caveats in international law and abstracts from the specific situation in Gaza.” …

“The narrow coastal strip is among the most densely populated areas on the planet. More than 70 percent of its two million residents are refugees, while more than half — one million — are children under the age of eighteen. For over a decade, Israel has placed this speck of land under a devastating siege. Fifty percent of Gaza’s workforce is now unemployed, 80 percent depend on international food aid, and 96 percent of the tap water is contaminated.” …

“The only morally sane question presented by the situation in Gaza is, Does Israel have the right in the name of “self-defense” to poison one million children? It is a sad commentary that this simple question has not just been sidestepped, but is not even visible in the current debate.”