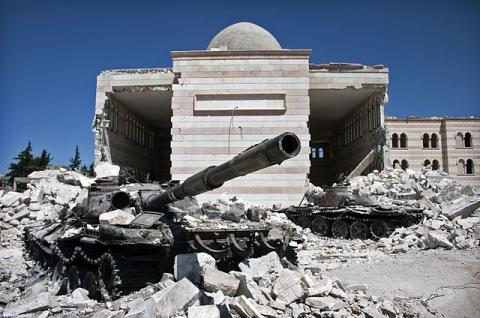 The following analysis is excerpted from Syria and Iraq Alert II, a recent analysis by PAX, the Pax Christi International member organization in the Netherlands, and was published in the January-February 2015 NewsNotes.

A response to ISIS must be inclusive in character, with a long-term objective of legitimate and responsive governments in Iraq and Syria. Years of repression and marginalization fed into the population’s frustration and resentment, particularly among younger generations. In Syria as well as Iraq, the government that is supposed to protect its citizens against massive human rights violations and war crimes has proven to be one of the worst threats to their human security. This contributed to the radicalization that gave rise to ISIS in Iraq. The expansion of ISIS has further deepened sectarian polarization in the region with Shia actors connected to Iran at one extreme and different Sunni groups with various levels of radical character at the other. This divide dominates the political situation in Iraq and Syria, and also strongly affects the political situation in neighboring countries, particularly Lebanon.

The new Iraqi government has the duty to rebuild the trust of the Iraqi population and address many of the root causes of the current crisis by developing truly inclusive policies. PAX proposes that countries involved in the coalition against ISIS which are supporting the new Government of Iraq (GoI) and the Kurdish Regional Government (KRG) develop benchmarks in dialogue with the GoI and the KRG towards a more inclusive political system as conditions for further support for and cooperation with the GoI and KRG.

In Syria, ISIS could fill the power vacuum left by the erosion of the Assad regime in many parts of the country, but, unlike in Iraq, was not able to achieve a strong support base in the country. Establishing inclusive and participatory governance at the local and national levels will be the best strategy for preventing radical groups such as ISIS from taking further ground there. That also means that a political transition process needs to be established to move from the politically-exclusive Assad regime that is responsible for numerous war crimes to an alternative that is politically inclusive of all groups marginalized because of religion, ethnicity, gender etc. and geographically representative (including of the marginalized rural areas).

The proposal of UN Special Envoy Staffan De Mistura to establish a "freeze" of fighting in Aleppo to start with provides an opportunity to develop democratic and participatory local governance, which makes communities more resilient against radical groups. De Mistura stated that a freeze in fighting should be supplemented by a revival of local governance and administration and that they could be test areas for decentralization. If a freeze in fighting in Aleppo would be accompanied by international support to develop democratic and participatory local governance in Aleppo, it could become an example for other parts of the country.

Regarding Syria, the Syrian Opposition Coalition (SOC), which is until today the only political body on a national level with a wide representation, has made efforts to be an inclusive political representative body for the Syrian people, but has not yet succeeded in that. Representation of minority groups such as Christians is dependent on their political allegiance to certain political currents or foreign supporters rather than on an inclusive national agenda. The SOC has not been able to address seriously Kurdish rights. Women’s representation in the SOC is minimal. The establishment of the Temporary Government provides an opportunity to develop a democratic political body that applies inclusive policies and facilitates participation, but this will require international support and a system of benchmarks for inclusive governance.

Legal reform and inclusivity – Inclusivity should be a hallmark of legal frameworks that foster citizen rights and equal participation in the Iraqi and Syrian political and administrative systems. Legal systems should grant equal rights to all citizens regardless of religion, ethnicity or gender.

Security sector reform (SSR) and inclusivity – An inclusive national army and police force that protect all citizens is a condition for peace and should be one of the top priorities for the international community for its work in Iraq. One of the major causes of the current crisis in Iraq is the lack of equal representation of all groups in the security sector, in particular at decision-making levels. For Syria, SSR on a national level would be an important issue for a later stage, as the international community has no control and little leverage over the various armed groups, including foreign fighters on the different sides of the conflict. If countries deliver arms and provide military support to the Free Syrian Army, this should be done only under strict conditions. On a local level, local governance development should include an SSR process of transforming armed groups into police and civil defense under civil control.

Social policies and inclusivity – The deep roots of the current conflicts reside in cultural and social structures that enable sectarian discrimination and exclusion of groups and individuals on the basis of ethnicity, religion, gender and age.