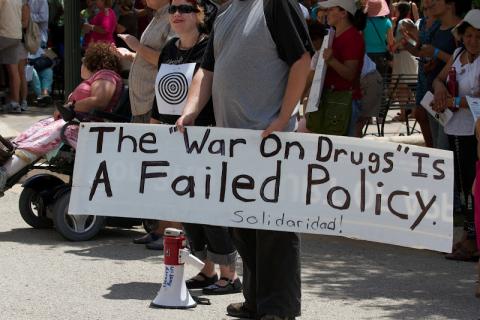 The following analysis was written by Laura Carlsen and published by the Center for International Policy’s Americas Report.

In early August], Sen. Patrick Leahy (D-VT), chair of the Appropriations Committee, blocked release of $95 million dollars in funding for the Merida Initiative, citing the lack of a clear strategy on the part of the U.S. State Department and the Mexican government.

"The whole thing looks like just coughing up money with no accountability," Leahy was quoted as saying in the legislative monitor, CQ Roll Call.

The decision is a long-overdue recognition that the drug war in Mexico has been a bloody fiasco. The Merida Initiative, a Bush-era plan to attack cartels in Mexico and reduce trafficking of prohibited drugs to the U.S. market, began in 2008. Congress has appropriated $1.9 billion from the federal budget for the program over the past five years, most aimed at bolstering Mexican security forces. Since the drug war was launched and armed forces deployed to fight the cartels, the homicide rate in Mexico soared 150 percent, between 2006 and 2012.

[In August 2012], the State Department asked the committee to obligate some $229 million assigned to the Merida Initiative in the 2012 budget. At first, Leahy decided to hold up the entire amount, after receiving a two-and-a-half page explanation from the State Department that he felt failed to adequately describe spending and objectives.

In April, the committee released $134 million, but held up the rest pending more information from State and the Mexican government on how the money would be spent, what the goals were and how the programs and resources would help achieve those goals.

Since then, neither government has clarified publicly or to their respective Congresses the state of drug war cooperation or where they want to take it. [The August 1] announcement confirms the hold on the funds and obliges both governments to define a joint strategy that shows some signs of viability.

Contacted shortly after the hold, a top Leahy aide summed up the reason behind suspension of the aid, "We received less than three pages of explanation. Senator Leahy does not sign away a quarter of a billion dollars just like that."

From its Bush origins as a "Counternarcotics, Counterterrorism and Border Security" plan (a leaked 2007 document that to date provides the most detailed public description), what was formerly known as "Plan Mexico" has provoked criticism in Congress and the public for the lack of transparency and strategy.

The fact is that the Merida Initiative and the Mexican drug war were poorly conceived from the start. The government General Accounting Office wrote in a 2010 evaluation that the program was adopted without benchmarks for measuring success or even a clear definition of what success means.

Leahy’s concerns center on the lack of strategy from either government, growing human rights violations and a continuing problem regarding the level of consultation on what is supposed to be a joint effort. As an example of the latter, the State Department presented the request for releasing the funds in August of last year—when Mexico was governed by a lame duck president and no one yet knew what the new security strategy would look like or who they’d be working with in the new cabinet.

The aide added that the problem goes beyond the lack of accountability.

"There’s a concern that the Merida initiative has not achieved what people hoped for," he said. "The Mexican people seem to share this view and they voted for a change. But it’s not clear yet what President Peña Nieto intends, and what he is doing differently."

In its eight months in office, the government of Enrique Peña Nieto has announced a slate of new security programs, some apparently aimed more at prevention and attention to root causes of violence as promised in his campaign. But on the ground the drug war has intensified, with the occupation of the state of Michoacán by armed forces and continued military deployment and joint counternarcotics operations. Violence continues unabated.

A lack of information from the Mexican Embassy in Washington, and the apparent contradictions between actions and rhetoric has created uncertainty, according to Washington insiders.

Likewise, although the State Department has changed the listed objectives every few years and attempted to apply new monikers such as "Beyond Merida" and "Merida II," it has not presented a significant shift toward a new, more effective and less violent binational strategy. Even as disastrous results poured in, the Merida Initiative has not shifted away from the drug war model of supply-side interdiction and enforcement—a model that has backfired in every part of the world it has been applied.

The Merida initiative is based on a military/police approach to counternarcotics operations, something that Senator Leahy has criticized from the inception. Although direct funding to the Mexican armed forces has decreased since 2008 and 2009 appropriations, the emphasis on special ops to take down drug lords and seize shipments has led to head-on confrontations and sparked gangland rivalries.

In Mexico, the Drug Enforcement Agency (DEA) has greatly expanded operations, alongside the spread of CIA, FBI and other agency activities. Since foreign military presence is prohibited under Mexican law, under the aegis of the Department of Defense Mexican military personnel are being trained in Iraq-style operations in a new Northern Command unit in Colorado Springs, at Fort Bragg, and in the infamous School of the Americas.

This strategy to conceive of Mexico’s crime problem as a perpetual war has, predictably, made the nation on our southern border look more and more like a war zone. Five years into what was originally just a three-year funding plan, some 100,000 Mexicans have been murdered, and tens of thousands more have been wounded, raped or forced to leave their homes. Every day brings more decapitations, torture, assassinations and disappearance, and in far too many cases the evidence points to government security forces themselves as the culprits.

Even with an increase in arrests, Mexico’s corruption, its notoriously dysfunctional justice system and the resiliency of drug cartels battling for a multi-billion dollar business have made the drug war as fought on Mexican soil a futile endeavor. After years of promises, the U.S. government has not put a dent in arms smuggling from the U.S. to Mexican cartels, or demand reduction, or the flow of illicit funds through its financial institutions. Punitive drug laws have put millions of black and Latino youth behind bars even as the drug trade thrives.

Congress is right in putting a stop to public expenditures in futility -- especially ones that take human lives. Leahy has advised that unless his committee receives information detailing a joint plan to achieve defined goals, future appropriations will also be frozen.

Since the Merida Initiative requests are usually buried in multi-billion dollar foreign operations and defense funding bills, it has not gotten the scrutiny it deserves. Leahy’s action turns the spotlight onto a situation that should never have gone on as long as it did.

Representatives in Washington must go further now and call for a full review of the Merida Initiative before appropriating or releasing any funds. It is arguably among the most wasteful and counter-productive programs in the federal budget and raises grave concerns regarding human rights. A series of human rights stipulations have only served to whitewash an aid package that has encouraged a sharp rise in violations by Mexican armed forces and police by rewarding the perpetrators, who rarely face any consequences for their actions.

Mexican and U.S. human rights groups have been calling to suspend the Merida Initiative for years. As that demand was ignored, the death toll mounted and organized crime groups grew more vicious and ambitious. The governments seemed to think it was enough to assure people it was just the darkness before the dawn and ask citizens to have patience.

For the mothers and fathers of the war’s victims, patience is not a virtue. A caravan of family members of Mexican victims visited Leahy’s office and other Congressional members last September urging an immediate end to the drug war. The nationwide caravan aimed to show how the Merida Initiative and other U.S. aid support for the war on drugs has devastated their families. Their stories brought many staffers to tears.

It’s about time someone in government called for a halt to throwing good money after bad at Mexico’s drug war. It not only doesn’t work; it kills.

Photo from 2012 rally at U.S. Capitol by Paul Helfinstein/Picasa