Mexico: Caravan for peace with justice 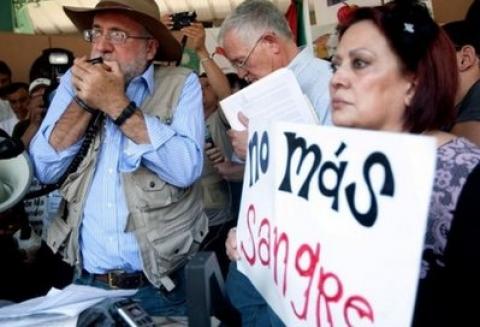 In the past six years, Mexico's "war on drugs" has led to as many as 60,000 deaths and 10,000 disappearances, and has displaced 160,000 people. Characterized by an intense militarization, including the deployment of over 50,000 troops and federal police, this strategy has undermined the country's social fabric and security even more deeply, but has done little to address the painful iniquities of drug trafficking in Mexico. Some victims are saying enough, and demand an alternative to militarization and the war on drugs. Their message is not only directed at the government and people of Mexico: This summer they will bring their message to the U.S. to raise awareness around the U.S. connection to Mexico's war on drugs. The following piece was written by Brennan Baker and published in the July-August 2012 NewsNotes.

Less than two weeks after he took office in 2006, President Felipe Calderón declared an all-out war on Mexico's drug cartels. In the six years since then, that "war" has played out in the midst of daily life, sending the country into a vicious cycle of violence that has exploded beyond a battle between cartels and law enforcement. Much of it has been directed at civilians: Journalists have been kidnapped and/or killed; public officials have been assassinated; most appalling have been the massacres of random civilians. For example, gunmen killed 16 people—including two journalists — in a bar in the capital city of Chihuahua, Chihuahua in April 2012. More recently on June 12, gunmen killed 11 people at a rehabilitation clinic in Torreón, Coahuila. Indiscriminate killing and the escalation of violence has become commonplace in Mexico over the past six years, as the cartels have battled each other and attempted to intimidate and terrorize the population and force the military to withdraw their presence on the streets.

In the face of this horror, those affected most have not remained silent. The Movement for Peace with Justice and Dignity (Movimiento por la Paz con Justicia y Dignidad) emerged in March 2011, when poet Javier Sicilia called for protests after his son and six others were found suffocated and gagged inside a car on the Cuernavaca-Acapulco highway. The death of Juan Francisco Sicilia gave a name and face to the tens of thousands brutally murdered and disappeared during the conflict.

Since Sicilia's call, a social force of relatives of victims and others fighting to be heard has risen up, offering an alternative vision, articulated in their Pact for Peace and Justice—a six point proposal that emphasizes civic unity over violence and militarization:

Embodying these principles, Sicilia, along with 500 others, left Cuernavaca's Paloma de la Paz on May 5, 2011, marching and sharing stories about the violence and injustice that typifies the war on drugs. The March for Peace gained massive numbers along the way, eventually peaking at around 150,000 participants. Through these and other demonstrations Sicilia and the Movement for Peace have gained significant public support and political stature. After realizing the movement's growing momentum President Calderón agreed to series of public dialogues with Sicilia last year, but refused to end the militarization.

This summer, Sicilia and the movement will bring their message to the U.S., joining allies here on the month-long U.S Peace Caravan. They will leave from San Diego on August 12, crisscrossing the country, before finally arriving in Washington, D.C. on September 10. Through the caravan, the group is seeking a dialogue with U.S. society and government on the need for a new strategy by the U.S. and Mexico for addressing the drug problem. (Through the Merida Initiative, the U.S. has provided Mexico with $1.6 billion in military aid in order to combat the drug cartels.) As Sicilia told The Nation in June: "Drugs and weapons are a business, legal and illegal. We are producing dead people and we are destroying our nation. And if the American people don't do anything, they are accomplices to the crime. Each one of their addicts, and each one of their guns and weapons, are our dead. We want you to be aware of that; together we can stop this war."

Along the route, the caravan is calling for support from civil society organizations, and hopes to join with Latino and African American communities, whose members have been criminalized by the U.S. war on drugs.