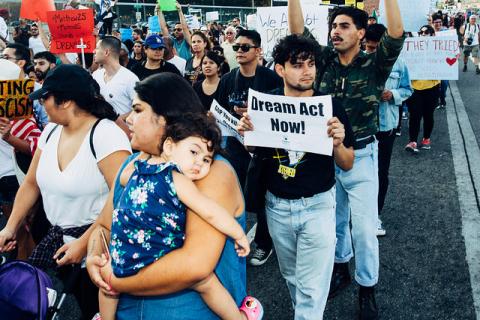 On November 1, the Maryknoll Office for Global Concerns sent the following letter to all Members of Congress as part of a daily letter drive during the first week of November by more than 50 faith-based organizations in support of the Dream Act of 2017. House Democrats are threatening a government shutdown unless Congress adopts protections for Dreamers by December 8. The letter was published in the November-December 2017 issue of NewsNotes.

On behalf of Maryknoll missioners – Catholic Sisters, Father and Brothers, and Lay people who, for over 100 years and in dozens of countries around the world, have looked to Jesus as a model of compassion as we work for peace and justice with those on the margins of society – we ask you to take action to resolve an injustice that is happening in the United States.

We urge you to pass the bipartisan Dream Act of 2017 (S.1615/H.R. 3440) to protect the very lives, livelihoods, and contributions of millions of Dreamers and their families, immigrants brought to the United States as children who only know life here, yet who are now being threatened with deportation, instability, or lives lived in the shadows.

President Donald Trump’s termination of Deferred Action for Childhood Arrivals (DACA) threatens not only to cut off a path to citizenship for nearly 800,000 Dreamers, but also tear apart families, weaken communities and our economy, and discard the wealth of contributions made by these valuable members of our society. More than 90 percent of these children have gone on to graduate from U.S. high schools and nearly 90 percent are employed. They are our neighbors, coworkers, classmates, families, and friends. They are among the best of us.

We ask Congress to uphold the inherent human dignity of these Dreamers. Passing the Dream Act would permit them to work, educate themselves and others, and eventually become citizens. They would continue serving in our military, building our economy, and strengthening the fabric of the country.

Please do not punish the Dreamers for choices they did not make or saddle their dream with other imperatives of comprehensive immigration reform. We ask that you act humanely and not ransom them in their hour of need.

In this moment of great moral decision, we look to Pope Francis, who in his address to Congress said: “We need to avoid a common temptation nowadays: to discard whatever proves troublesome. Let us remember the Golden Rule: 'Do unto others as you would have them do unto you' (Matthew 7:12).” We pray that you uphold the United States as a moral and just nation, and have the courage to show mercy and compassion and pass the 2017 Dream Act.

Read the PDF version of the letter.