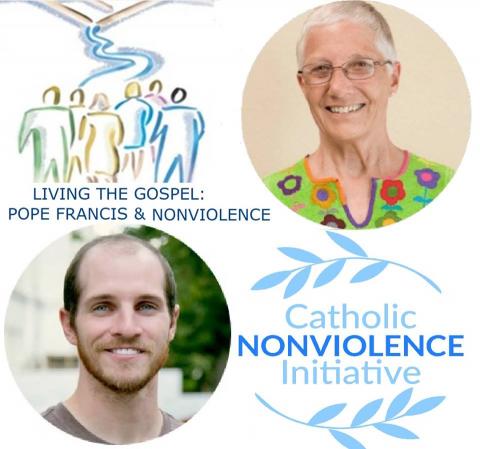 Recordings are available of presentations made by Marie Dennis of Pax Christi International and Kevin Carroll of the Maryknoll Office for Global Concerns on the writings of Pope Francis on nonviolence and the work of the Catholic Nonviolence Initiative. The following article was published in the March-April 2019 issue of NewsNotes.

On January 26, more than seventy people gathered at the Church of the Resurrection in Burtonsville, Maryland, to learn more about the writings of Pope Francis and the work of the Catholic Nonviolence Initiative. As part of the “Living the Gospel: Contemplation and Action” adult faith formation series,  a joint venture of three Maryland parishes: Saint Camillus in Silver Spring, the Church of the Resurrection in Burtonsville, and Saint John the Baptist, also located in Silver Spring, participants meet regularly for retreats, workshops, and discussions aimed at bringing the Gospel to bear on their daily lives, an concern weighing heavily on the minds of many people in the Catholic Church, given internal and external developments that impact local, national, and international communities.

The purpose of the event was to contemplate the question: How can we live nonviolently in a violent world? Pope Francis has said “The true strength of the Christian is the power of truth and love, which leads to the renunciation of all violence. Faith and violence are incompatible.”

The Catholic Nonviolence Initiative (CNI), a project of Pax Christi International, affirms that active nonviolence is at the heart of the vision and message of Jesus, the life of the Catholic Church, and the long-term vocation of healing and reconciling both people and the planet. The Initiative was launched after the Nonviolence and Just Peace conference which was sponsored by the Pontifical Council for Justice and Peace and Pax Christi International in Rome in 2016.

Presenters for the event were Marie Dennis of Pax Christi International and Kevin Carroll of Maryknoll Office for Global Concerns. Veronica Fellerath-Lowell of Saint John the Baptist Pax Christi and a member of Pax Christi USA’s National Council served as facilitator.

In addition to examining the pope’s writings, participants examined the CNI’s appeal to the Catholic Church, written during the 2016 conference in Rome and open to endorsement by all Catholics, to re-commit to the centrality of Gospel nonviolence. The appeal lays out a vision of a Church that supports further development of Catholic social teaching on nonviolence to reflect the Gospel and integration of Gospel nonviolence explicitly into daily life, including sacramental life and the work of the Church in its dioceses, parishes, agencies, schools, universities, seminaries, religious orders, and voluntary associations.

Marie Dennis spoke about the meaning of Gospel nonviolence and her experience at the 2016 conference in Rome, as well as appeal and the 2017 World Day of Peace message, both of which grew from seeds planted during the conference. Marie also described some of the latest developments in the CNI, including a second meeting in Rome, this time organized with the Dicastery for Promoting Integral Human Development, to be held this coming April.

A recording of Marie’s presentation is available online at: http://bit.ly/MarieDennisCNI

Kevin Carroll of the Maryknoll Office for Global Concerns presented details of the work of the CNI in the United States, including concrete examples of ways to integrate Gospel nonviolence into the life of the Catholic Church. Kevin welcomed Mary Joan (MJ) Park from Little Friends for Peace to speak about her upcoming workshops for parishes called Gospel Nonviolence in Daily Life. MJ and her husband Jerry Park were the 2008 recipients of the Teachers of Peace Award by Pax Christi USA.

A recording of Kevin’s presentation is also available online at: http://bit.ly/KevinCarrollCNI

The presentations were followed by small group discussion and large group sharing on ways the attendees’ parishes and communities can strengthen their commitment to living the principles of Gospel nonviolence.

If you are interested in hosting a similar event in your parish or community, please contact Kevin Carroll with Maryknoll Office for Global Concerns at kcarroll@maryknollogc.org or (202) 832-1780.