A litany for ecological healing 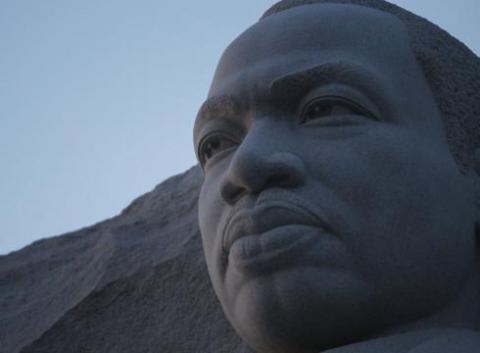 President Obama’s second inauguration will be held on Monday, January 21, the same day that Martin Luther King, Jr.’s birthday is observed. As we continue to witness the negative ecological impact our current economic, political and social systems inflict, the Maryknoll Office for Global Concerns shares these excerpts of a litany for ecological healing prepared by Ibrahim Abdil-Mu’id Ramey for a multi-faith sunrise service that was held in April 2012 at the site of the Martin Luther King, Jr. Memorial located at the Potomac River Tidal Basin in Washington, D.C.

Leader: This morning, we gather in the light and the honored memory of Dr. Martin Luther King, Jr., both to give witness to his legacy, and to draw from the energy of his spirit and dedication to the cause of freedom and justice for all humanity. We know that, were Dr. King alive today, he also would be moved to take nonviolent, direct action to bring attention to the climate crisis that threatens the well-being of our world, and all living things that inhabit it. The “fierce urgency of now” of the struggle for civil and human rights in his time, is now the real danger of climate change that threatens us and future generations.

All: We ask the Creator of all life to fill us with compassion for all humanity, and to recognize the dignity and inherent worth of all people.

Leader: As we come together in a place by the Potomac, a mighty river, we are conscious of the water that gives life to our planet, and the tragedy of climate change that jeopardized the health of our oceans and rivers.

All: We ask the creator of all things to make us mindful of our need to preserve and define the health of our waters, and to prevent the climate change that threatens to flood islands and low-lying areas…

Leader: In the same way that he recognized racism and militaristic violence as moral cancers that endangered us all, Dr. King also saw materialism, and the worship of irresponsible and boundless consumption, as a great evil at the root of much human misery, and an evil that now threatens the survival of the very biosphere upon which we all depend.

All: We ask the Creator of all life to grant us the wisdom to preserve and conserve our natural resources, and to always promote the individual and collective use of renewable energy, responsible, earth-friendly technology, and the consumption of foods that do not damage our earth, our air, and the waters of our planet.

Leader: As a social movement-builder, Martin Luther King’s message was one of inclusion and engagement of all people for a common good. While he recognized the importance of the Black church in the struggle for civil and human rights, his social justice movement also embraced the energy, talent, and good will of people of all races, religious and ethnicities. Young and old, rich and poor, native-born and those from other lands, were all part of the mosaic of his struggle for freedom and positive change.

All: We ask the Creator of all life for the wisdom to recognize that, because all human beings inhabit one earth, we must work as one, unified human family to overcome our divisions and build mutual solidarity to restore our common habitation and protect the climate that surrounds us all.

Leader: Even when confronted by hatred, Dr. King held true to his principles of Christian love and active nonviolence. He refused to hate his adversaries, but instead, he called for us to love them, as he also called these adversaries to a higher moral plane as he sought to win them over as allies.

All: We ask the Creator of all life to help us to avoid demonizing and hating those whom we see as promoting the irresponsibility, and dangerous actions and policies that endanger our earth. Instead, empower us to win them over to our cause with positive perseverance and a genuine sense of caring.

Leader: Finally, we recognize the profound wisdom of Martin Luther King, Jr., when we spoke of all people being inextricably bound by a single garment of mutuality. All women, men, and children live on this earth, and will either share its wonders and bounty, or will all share in the tragedy of its suffering.

All: We ask the Creator of all life to give us the spiritual strength, moral vision, and political will to continue this work of struggle, engagement, and prophetic witness as we respond to our climate crisis, and ultimately, to all forms of injustice in our world. Grant that we might continue to walk in the light of your servant, Martin Luther King, Jr., and work for the restoration of our climate and the protection of all life on our planet, until we, and our earth, are free at last.