Liberia: Militarization of fight against Ebola 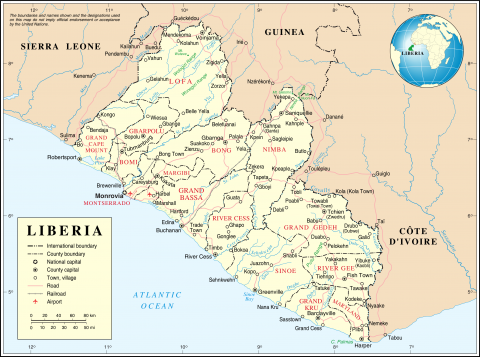 The following report, published in the September-October 2014 NewsNotes, was written by Ezekiel Pajibo, who was an active member of the resistance movement against then-dictator Samuel Doe in Liberia in the 1980s; Pajibo was imprisoned for his work, landing him on the list of Amnesty International’s prisoners of conscience. He now lives in South Africa.

The news out of Liberia these days is not comforting. Only 11 years ago the country ended a brutal civil war in which more than 250,000 were killed. Liberia’s war years introduced new semantics in terms of how war is conducted: Child soldiers, conflict diamonds, conflict timber, the use of natural resources to support and prolong warfare all became common place. Charles Taylor, the war time president, became the first African leader to be tried for war crimes and crimes against humanity. He was convicted, and currently serves his sentence in a British prison.

After the war, Liberia captured international attention by electing Ellen Johnson Sirleaf the first woman president in Africa. The darling of Washington, London, Paris and other western governments, she was toasted, praised and celebrated. It appeared that the country once known for military dictatorship, for the barbarity of warfare, for backwardness had turned the corner and had become a new nation, looking forward to the future with certainty.

However, in its final report in 2009, the Liberian Truth and Reconciliation Commission, established in 2005, recommended that President Sirleaf not seek re-election due to findings that she was complicit in supporting Charles Taylor’s reign of terror and mayhem. International figures and organizations ignored the TRC report and Mrs. Sirleaf went on to win a second term.

Since her re-election, claims of corruption have bedeviled her administration. Yet she remains a darling of the West. Feted by Presidents George W. Bush and Barack Obama, the Harvard-educated Sirleaf has been honored by several U.S. universities.

After more than 10 years of peace, however, the conditions of those who are impoverished have not improved; unemployment remains at a staggering 70 percent. The World Bank and other multilateral agencies spoke highly of economic improvements, citing the GDP as proof that the economy was on the rebound, but the abject poverty of the vast majority of Liberians was ignored.

Several social indices presented themselves. In the last two years, the number of Liberian students who sat for aptitude tests failed miserably. Last year, several thousand students sat for a placement exam to enter the only public university in the country. They all failed. Critics of the government continue to point out that the Sirleaf administration is failing in its responsibility to respond to the needs of the Liberian people. Their admonitions were dismissed.

The outbreak of the Ebola virus appears to be the final breaking point. In late February, Liberia’s neighbor Guinea announced the epidemic. Liberia’s opposition figures prevailed on the government to develop a response, but there was none.

It was not until July when the outbreak had become an epidemic that the government became seized of the situation. It was too late to act. Liberia health infrastructure is close to non-existent. In fact, since 2006, the government of Liberia has not prioritized health or education. Instead, its priority has been getting international investment into the country. In the view of the government, private investment was the engine of economic growth and by extension improvement in the lived conditions of Liberia’s poor majority. Never mind the fact that a US$16 billion investment in the country did not improve unemployment and more than 70 percent of Liberians were living in absolute poverty with little or no access to education and health facilities.

The response of the Liberian government to deal with the crisis was the proclamation of Emergency Power, the introduction of a curfew and the quarantine of mostly poor communities. What this means in actuality is the criminalization of poverty and the militarization of the government’s response.

Accordingly, road blocks have appeared around the country, the military presence is pronounced and poor people are going without food or water. When they protest, they are gunned down. Prices of basic goods have skyrocketed and people who are poor are dying from hunger. Some reports suggest that more people are dying from other diseases because hospitals have been shut down given the fact that most health workers are refusing to report for work. In many cases, health workers do not have the necessary resources to adequately deal with the epidemic. More than 60 health workers are among the more than 400 dead in Liberia since the outbreak. Other infrastructural impediments include an almost impossible access to clinics, grossly inadequate ambulance services and many clinics’ lack of laboratory equipment for proper diagnosis of the disease. What is more, in some instances body bags are not available to bury the dead and hospitals have no gloves, goggles, or disposable syringes to attend to the afflicted.

What the Ebola virus outbreak has demonstrated and the international community refuses to consider is the fact that President Sirleaf’s administration was not interested in improving the general welfare of Liberians. It was interested in meeting the dictates of the International Monetary Fund and the World Bank so that the country would become a destination of foreign direct investment. Liberia’s recent discovery of oil sufficiently demonstrates the point. As well, foreign direct investment in the country has largely been in the area of palm oil plantation by Malaysia and Indonesia, and mining – Chinese and Indians interests – none of which employ a value chain that ensures Liberia and its people are the primary benefactors.

Thus the inability of the Liberian government to effectively manage the Ebola crisis makes clear its devotion to embracing a neoliberal economic model instead of attending to the basic needs of its people: an opportunity to acquire skills, easy and affordable access to health services and employment opportunities to become productive and thereby create a prosperous society. The spread of Ebola is a condition of impoverishment and highlights the absence of an economic framework that puts the people of Liberia first.