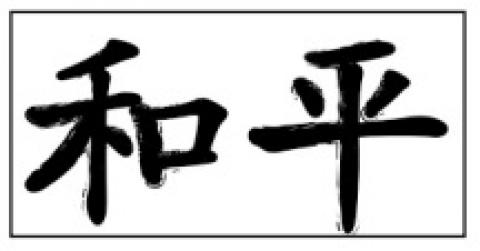 Sr. Marvie Misolas, M.M., considers the limitations and dangers of the concept of “liberal peace,” and reflects on the notion of “liberating peace.” The following article appeared in the September-October 2019 issue of NewsNotes.

The concept of liberal peace, often referenced in international affairs, is elusive and complex and thus necessitates thoughtful consideration. Liberal peace has been defined as “the promotion of democracy, market-based economic reforms and a range of other institutions associated with ‘modern’ states as a driving force for building ‘peace’” (Newland, Paris and Richmond 2009). I believe this is too narrow a definition of peace. In my own reflection, I choose to dwell instead on the concept of “liberating peace.” My multiple cultural and linguistic backgrounds shed light on the distinction between these two concepts of “peace,” as does contemplation of nature.

From my point of view, in English, the phrase “liberating peace” could have two meanings: first, to free or liberate our mainstream understanding of the word “peace” from the false or negative connotations it has come to possess, and second, to connote a peace that truly liberates people from violence. The linguistic roots of my two cultural backgrounds, Chinese and Filipino, also shed light on the meaning of “liberating peace.” With respect to the two Chinese characters for peace, He Ping (pictured), the He has characters representing ‘five grains’ and a mouth. In other words, “There is peace when there is enough grain to feed every mouth.” The character Ping represents equality and level relationships. For the Chinese, peace signifies abundance and enough resources, and no one is hungry. In my native Filipino language, the word for peace, “Kapayapan,” is composed of three root words, which together signify partnership, togetherness, collectivity, and absence of disturbance.

Nature, too, speaks to a similar notion of peace. When visiting a forest, everything seems peaceful.  The breeze, the trees, the grass, the colors, all vibrate of peace.  Somehow, in the order of nature, peace is like a tree sitting quietly – unseen by our naked eyes – their energies connecting with all the elements, nothing standing on its own.  In this connectedness, one becomes oneself - contented and still, at peace.

In contrast to all this, I think of ‘liberal peace’as a constructed understanding of peace to counteract modern war and/or conflict.  We human beings find solutions to the problems we ourselves create.  The historical reality of war and conflict and its consequential costs to nature and humanity led our early thinkers to understand peace as merely the absence of war, or violence between nations, rather than the presence of cooperation, abundance, etc. The liberal peace approach is not future-oriented but reactionary.  The influence of Western patterns of thinking solidified a mainstream understanding of peace as “liberal peace” and established this norm in the theories and practices of peace and conflict resolution. Today, new forms of injustice are emerging within the paradigm of liberal peacebuilding: the ever-expanding gap between the rich and poor, the gap between the educated and non-educated people, the gap in the access of knowledge-based information.  These gaps are fertile fields for seeds of violence and latent war and conflicts within families, over socio-cultural status, groups, organizations and national distress.  The creeping dissatisfaction in many sectors of societies has been the departure point that often has surprised the world as we have watched many conflicts and instances of violence erupt fresh in front of our eyes.

The 1990s saw the increasing critique of liberal peace.  Huge numbers of atrocities in the name of peacekeeping have baffled many.  We have come to realize the limitation of the concept of “liberal peace” and the damage this limited paradigm has caused.

In conclusion, in our quest to liberate the notion of peace from this paradigm, we must begin this task within ourselves. We must begin to understand the aspects of our lives that are longing to be reconciled with others. The collective quest for peace must ensure the well-being and common good of all while protecting the Earth.  Our understanding of peace must expand beyond our left brain function, beyond the notion of mere absence of war or presence of Western institutions. May we claim our connectedness as living organisms in symbiotic relationships, not in the fragmented notion of peace in mechanistic and utilitarian paradigms. We are part of the whole; peace begins from within each of us.