In an October 2011 article in Foreign Policy magazine, Hillary Clinton named the "Asia Pivot," with Russia and China on one side and the U.S.-Japan-South Korea-Philippines-Thailand-Australia on the other. The following month, President Obama said in remarks to the Australian Parliament, "The United States is a Pacific power, and we are here to stay."  The following article appeared in the May-June 2014 NewsNotes.

Why is there an Asia Pivot and why did President Obama declare the U.S. a Pacific power? A year earlier, the National Intelligence Council wrote in Global Trends 2025: A Transformed World: "The global shift in relative wealth and economic power now under way – roughly from West to East – is without precedent in modern history."

Asian nations will return to political and economic power, and the U.S. government hopes to provide the framework through military power. South Korea is constructing a military base on Jeju Island to station U.S. marines and U.S. nuclear-powered aircraft carriers which could carry cruise missiles to destroy Chinese intercontinental ballistic missiles. According to the Mutual Defense Treaty and the Status of Forces Agreement between South Korea and the United States, the U.S. military retains wartime command over South Korea’s military and could use the naval base in a regional conflict. This is the consequence of ending a war without a peace treaty. (July 27, 2014 will mark the 61st anniversary of the Korean War armistice.)

In March, in a workshop entitled Ending the Korean War: Prospects for a Just, Durable and Lasting Peace, held at the annual Ecumenical Advocacy Days conference, Prof. Jae-Jung Suh of Johns Hopkins University shared this graphic of U.S.-North Korea relations: 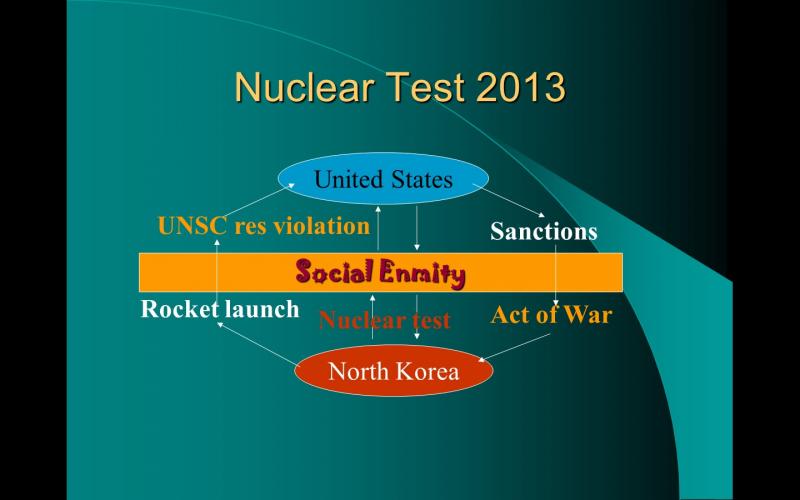 "Many policy observers, including myself," said Professor Suh, "find this vicious cycle frustrating because we know the results: military exercises and nuclear test." He went on to compare the results of policies of different U.S. administrations over the past 20 years:

The table highlights that dialogue works. Professor Suh said, "We need to bear witness to truth, bring truth to officials who make policy. Then we will see policy changes and transformation from crisis to peace."

On April 4 North Korea’s Deputy UN Ambassador Ri Tong Il accused the U.S. of being "hell bent on regime change" in North Korea. Since 2009, Siegfried Hecker, former director of the Los Alamos National Laboratory, has advocated for a U.S. policy of "three No’s for one Yes." The one Yes is for U.S. acceptance of the North Korea regime, thus ending North Korea’s overwhelming insecurity. This one Yes would enable three No’s by North Korea: no more bombs, no more tests for better bombs, and no export of weapons.

The peace process has been led by ecumenical groups, starting in 1984 when the World Council of Churches brought together delegations from North and South Korea in Tozanso, Japan, for the first face-to-face meetings of non-government peoples. These ecumenical initiatives, known as the Tozanso Process, continue today. The Ecumenical Working Group on Korea, together with other peace organizations, is working to gather one million signatures on the Korea Peace Treaty petition, and to promote screenings of "Memories of Forgotten War," a 40-minute documentary produced in 2013 which highlights the human costs of the unending war from the perspective of U.S. citizens. For 2015, their efforts will focus on bringing an ecumenical peace delegation to North and South Korea.

The Catholic Bishops Conference of Korea and its president, Bishop Peter Kang U-il of Jeju (pictured above), support the efforts of demonstrators risking arrest to stop construction of the military base on Jeju Island. Bishop Kang said, "This must be a land of peace, especially in light of the incidents of April 3 [1947, when one-tenth of the population was killed and more than half of the island’s villages were destroyed due to fear of a communist uprising.] Bringing the military back to this place means that the meaning of the death of those who have sacrificed for freedom is lost." In the 1990s the South Korean government officially apologized for the 1947 massacre and designated Jeju as "the Island of Peace" where such violence will not be repeated. (Jeju Island has been in the news recently due to the tragic ferry accident on April 16, in which over 240 people were killed; at press time about 60 remain missing and are presumed dead. Most of those who died were high school students and their chaperones on their way to visit Jeju for a four-day field trip.)

Pope Francis will visit South Korea in August. Residents of Jeju and the advocacy group Save Jeju Now are urging people to send letters to the pope, asking him visit Jeju Island and celebrate Mass at the construction site of the military base.

To learn more about the movement to stop the building of a naval base on Jeju Island, visit Save Jeju Now. To write a letter to Pope Francis asking him to visit Jeju Island, go to http://www.pope2jeju.org/. To sign the Korea Peace Petition, go to www.endthekoreanwar.org.