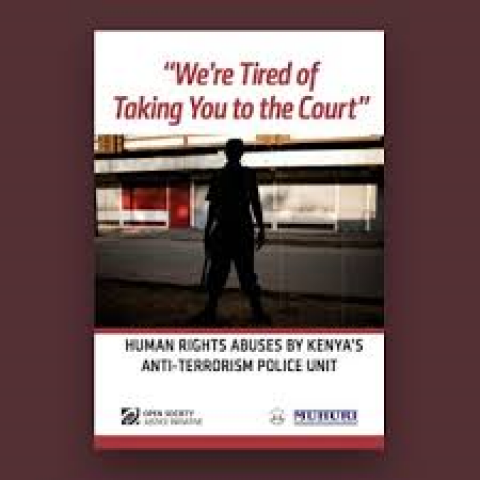 The following article appeared in the March-April 2014 NewsNotes.

In the wake of the terrorist attacks that took place on September 11, 2001, the United States increased its funding of anti-terrorism programs in numerous countries around the world. In 2003, almost $11 million was given to Kenya. Part of this funding went for an anti-terrorism instructor training held in New Mexico in May of that year. Between 2002 and 2007, Kenya received a total of $21,938,000 for anti-terrorism activities; in 2004 it established its own Anti-Terrorism Police Unit (ATPU).

After the terrorist attack on the Westgate Mall in Nairobi in September 2013, Kenya escalated its anti-terrorism efforts and the result, according to some organizations, has been the flagrant abuse of the human rights of certain groups. The city of Mombasa located on Kenya’s Indian Ocean coast has been the center of numerous such abuses.

In 2012-2013 eight Muslim leaders and three madrassa teachers were killed in the Mombasa area. As of early January 2014 all of these deaths were unexplained and uninvestigated; no one had been held accountable. In addition, a Kenyan national named Mohammed Abdulmalik was arrested in 2007 by Kenyan police, interrogated and then taken to Nairobi airport and handed over to U.S. personnel who rendered him to Djibouti and from there to Afghanistan and finally to Guantanamo where he is still held in imprisoned.

These and many other abuses of the ATPU are closely documented in a report entitled We’re tired of taking you to the court, published by the Open Society Justice Initiative and Muslims for Human Rights (MUHURI). According to the report, in its efforts to combat terrorism in Kenya, "the ATPU has committed a wide array of human rights abuses that violate international, regional and domestic law" including the use of excessive force during house raids, torture and ill-treatment of detainees, arbitrary detentions, including disappearances, and rendering terrorists suspects to countries where they face a real risk of torture. Kenya’s Prevention of Terrorism Act of 2012 also comes in for criticism: Like many anti-terrorism laws passed since September 2001, this act contains vague definitions of terrorism and expands police powers that can be used against various groups that may be at odds with the government including religious groups.

That the tension between the government of Kenya and Muslim groups in Mombasa is growing is evident from the recent incident at the Masjid Musa mosque in Mombasa. This mosque had been selected as the venue of a convention by Muslim youth who had chosen to be aggressive, assertive and threatening in their behavior. Some believe that these young people are disappointed in local Muslim leadership and have begun to adopt a radical expression of Islam. Police allowed the youth to assemble but then entered the mosque and arrested between 70 and 126 members of the meeting, including two women. In response to this and other incidents, President Uhuru Kenyatta declared that on TV that "we are a tolerant society, we respect all religions, but under no circumstances will we allow places of worship – be it a church, a temple or a mosque – to be used to radicalize our youth and threaten the lives of Kenyans."

We’re tired of taking you to the court claims that the current anti-terrorism strategy is not only unlawful but also counterproductive. The incident at the Masjid Musa mosque seems to bear this out. Young Muslims, according to the authors of the report, are turning to violent groups like Harakat al-Shabaab al-Mujaahidin for their inspiration and are demanding answers to the many deaths of Muslim leaders from the coastal area. In addition, the police of the ATPU are losing credibility because of aggressive and hostile tactics. As a result, the police do not get useful intelligence from communities in which suspected terrorists live. This comes at a time when Kenya is actually undertaking widespread police reforms, some of which have been signed into law but have not been fully implemented.