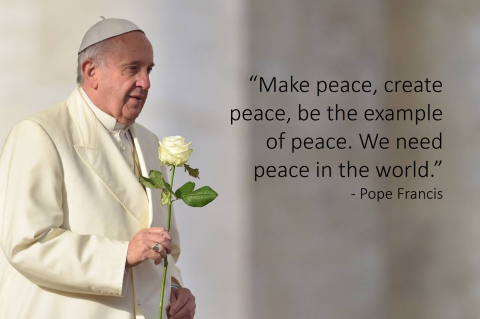 Pope Francis, San Diego Bishop Robert W. McElroy, and Jesuit Father Drew Christiansen have each offered new understandings of the role nonviolence plays in the pursuit of peace. The following article was written by Kevin Carroll, MOGC peace fellow, and published in the January-February 2018 issue of NewsNotes.

At the international symposium on disarmament, “Perspectives for a World Free from Nuclear Weapons and for Integral Disarmament,” promoted by the Dicastery for Promoting Integral Human Development this November, Pope Francis applauded the humanitarian and moral argument made by the UN nuclear ban treaty and warned that modernizing stockpiles and developing new nuclear weapons effectively removes nations’ capabilities to focus on “real” priorities: “the fight against poverty, the promotion of peace, the undertaking of educational, ecological and healthcare projects, and the development of human rights.”

He implored leaders “to reject the culture of waste and to care for individuals and peoples laboring under painful disparities through patient efforts to favor processes of solidarity over selfish and contingent interests.” He also lifted up the witness of the hibakusha: “May their prophetic voice serve as a warning, above all for coming generations!” In his introduction of Pope Francis, Cardinal Peter Turkson, lamented that, “We live in a moment of human history when fear about potential global catastrophe has intensified to a point rarely experienced, since the days of the Cuban Missile Crisis.”

In his remarks at the conference, Fr. Drew Christiansen, SJ, Distinguished Professor of Ethics and Global Human Development in the School of Foreign Service and Senior Research Fellow at the Berkley Center for Religion Ethics and World Affairs, stated that “In this new moment, the first responsibility for just-war analysts, I would argue, is to treat the legitimate use of limited force within the larger context of an ethic of peace. For Catholic just-war thinkers that would embrace not just the Church’s developing teaching on nonviolence and just peace, but also the fuller teaching on positive peace, including human rights, integral development and care for creation.”

Christiansen seemed to echo Francis when he said, “We should cease to imagine nuclear weapons as tools for us to manage, but rather as a curse we must banish.”“ He continued, Today’s just-war analysts, especially but not exclusively Catholics, have a responsibility to integrate into their scholarship the rejection of nuclear weapons by the Treaty to Prohibit Nuclear Weapons passed at the UN this summer…. Analysts must take into account a shift in the law of nations...and reject the legitimation of defense strategies based on nuclear weapons as supposed legacy rights under the Non-Proliferation Treaty.”

This represents a significant step forward, moving away from the doctrine of deterrence, toward “an interim ethic of disarmament,” as Stephen Colecchi, director of the U.S. bishops’ office of international justice and peace, framed it. Christiansen went further still, “Catholic moral theologians who are also just-war analysts have the responsibility with respect to global moral problems like climate change and nuclear abolition to make the Church’s teaching ‘church-wide and parish deep….[Analysts] share responsibility in a larger network of scholars and professionals who together build up the conditions of peace and defend it against the destructive effects of violent conflict.” Strong and poignant words from someone as respected in the field as Christiansen.

Bishop Robert W. McElroy of San Diego addressed the symposium after Francis: “In approaching the issues posed by nuclear weapons in the present moment, the Church must foster three dimensions of conversion in the world: a conversion from the prison of isolated national interests to the perspective of an integrated international common good; a conversion from the illusion of safety in nuclear strength to the reality of nuclear instability and proliferation; and a conversion from the reliance on weapons of war to the construction of weapons of peace.”

He continued, “The power of nonviolence, once relegated to the category of romantic idealism, has emerged as a potent force for social transformation and the building of lasting peace. The Church must be a voice in the world constantly pointing humanity toward the path of nonviolence and the logic of peace.” He called for “a radical dedication by the Church to bring the poor and marginalized into the very heart of the international debate on war and peace. For it is the poor and the marginalized who suffer most greatly from the theft which the arms trade constitutes, it is they who endure the greatest cruelty in the midst of war, and it is they, because of their radical dependence, who may have a unique capacity to convey to us who live in comfort that on the issue of nuclear weapons, we all stand in radical dependence and vulnerability.” This groundbreaking conference, full of statements like those above, represents a major departure from the church’s prior condoning of nuclear deterrence.