Journey for Justice in El Paso 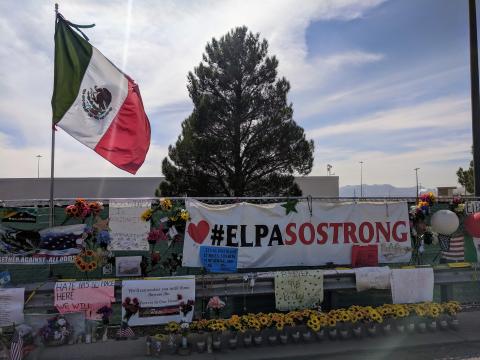 Maryknoll Office for Global Concerns participated in a teach-in and action in El Paso, Texas, on the themes of immigration, anti-racism, and Catholicism in the borderlands. This article appeared in the November-December 2019 issue of NewsNotes.

The Maryknoll Office for Global Concerns (MOGC) joined Catholic migrant advocates and scholars from across the United States in El Paso, Texas, October 11-13 for a teach-in, Jornada por la Justicia (Journey to Justice), organized by the Hope Border Institute and the Latinx Catholic Leadership Coalition, on the themes of immigration, identity, anti-racism, Catholicism, and the borderlands. Latinx and Indigenous speakers shared their stories and culture and presented theory and strategies for promoting justice rooted in their experience as Chicanos and migrants. At a closing liturgy, Bishop Mark Seitz of El Paso released a pastoral letter on immigration, racism, and violence.

For MOGC and colleagues from a coalition of Washington, D.C.-based Catholic groups, the action marked the culmination of a Catholic Days of Action campaign which has included actions in Washington, D.C. and in Newark, New Jersey. In El Paso, Latinx Catholics living in the borderlands welcomed the DC coalition to join a weekend of witness rooted in the mission values of solidarity, encounter, and accompaniment, inviting participants to walk with asylum seekers from Mexico into the United States.

On Saturday afternoon, one group from the teach-in held a “Jericho walk” in which they sang and prayed through the streets of El Paso. Another group crossed the border bridge into Ciudad Juarez, Mexico, to visit migrant families camped in the streets waiting for U.S. authorities to receive their asylum requests. Returning to the U.S. side, the group blessed the bridge with holy water, symbolically reclaiming it as a bridge of unity and connection between the two countries, as opposed to the place of division and violence that it has become.

A smaller contingent from the teach-in remained on the Mexico side, meeting with a group of fifteen Mexican asylum seekers, including teenagers and small children, who had been camping in the streets of Juarez for weeks. Under U.S. and international law, asylum seekers must be allowed to wait in the U.S. while their claims are evaluated, but under the Trump Administration’s “Remain in Mexico” policy, they are stopped on the bridge before stepping across the borderline, issued a number, and required to wait in Mexico until their case can be heard – a system called “metering” that exposes migrants to danger, especially in the case of Mexicans forced to wait in the same country from which they are fleeing persecution. The group from the teach-in walked with the asylum seekers as they crossed the bridge once again. This time, the asylum seekers were permitted to enter the U.S. and were processed by Customs and Border Patrol agents.

The fate of those fifteen asylum seekers remains uncertain. They would be interviewed to determine if they have a credible fear of returning to Mexico, after which they might be deported, split up and/or detained, or released to a shelter in El Paso. Waiting for a hearing and final decision could take months or years. In 2018, approximately 85 percent of asylum requests by Mexicans were denied. Aware of the risk the families still faced, the group that had accompanied them gathered for a prayer outside, and returned to the teach-in, celebrating that the families were finally in the US, but knowing their struggles would continue.

Throughout the weekend, participants were keenly aware of the horrific violence El Paso had faced just two months earlier, on August 3, when a white supremacist gunman traveled there to kill migrants and Mexicans at the Cielo Vista Walmart. People told stories of where they were when the news broke, of survivors and the twenty-two people who died. It was with awareness of the racism and violence directed at Latinx and migrant communities, and of the sorrow, trauma, and fear inflicted on the people of El Paso, that Bishop Seitz presided at a bilingual celebration of the Eucharist to close the gathering. At the end of the Mass, he released his pastoral letter, “Night Will Be No More.”

Bishop Seitz’s letter has been praised for addressing white supremacy and racist violence more explicitly than have previous bishops’ statements. He names these as sinful and draws a direct line through history, from European colonialism and U.S. expansionism, through slavery and the exploitation of migrant labor, to the xenophobia and hatred that plague our hearts and institutions today and which are reflected even in the rhetoric of “our highest elected officials.” He upholds Latin American faith traditions, such as devotion to Our Lady of Guadalupe, as models for identifying Christ in the other and bringing hope and dignity to the excluded. Finally, he calls on the Church to recognize the prophetic leadership of Latinx men and women – a message that resonated easily with participants in the Latinx-led teach-in and action in El Paso.

Photo by Dan Moriarty of the MOGC.