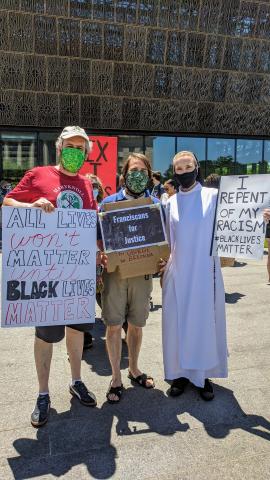 The leadership of the Maryknoll entities and the Office for Global Concerns are responding to the growing anti-racism movement in the United States. The following article was published in the July-August 2020 issue of NewsNotes.

Since George Floyd, an unarmed Black man, was killed by a police officer in south Minneapolis on May 25, 2020, the Black Lives Matter movement has become the largest civil rights movement in history, sparking mass protests against systemic racism in the United States and around the world. On June 10, the leadership of the Maryknoll Sisters, Fathers and Brothers, and Lay Missioners issued the following joint statement, “A Call for Anti-Racist Transformation in the United States:”

“Maryknoll missioners mourn the tragic death of George Floyd in Minneapolis and all those who have lost their lives as a result of the sin of racism. Our faith is rooted in the belief that every person is made in the image and likeness of the Creator, and thus equally deserving of dignity and respect. We join Pope Francis in saying we cannot tolerate or turn a blind eye to racism and exclusion in any form and yet claim to defend the sacredness of every human life. We abhor the violation of life that racism represents.

Seeing the video of the killing of Mr. Floyd and other videos of killings, beatings, and harassment of black and brown people by police and others who benefit from white privilege has made us all witnesses to the persistent sin of racism that resides within hearts and distorts social structures in the United States. We stand in solidarity with our suffering black and brown brothers and sisters who live in fear due to systemic violence, and with all those expressing grief and outrage, who feel their voices are not heard. We echo their cry of Black Lives Matter and their call for justice, to reverse the power of the state used against people of color.

Mr. Floyd’s tragic death occurred during the COVID-19 pandemic, which has revealed stark truths about systematic racial inequality in the United States, as black and brown deaths skyrocket and economic devastation in black communities teeters on depression. It is painfully clear that the United States has never fully atoned for its original sin of slavery and the proceeding century of racial discrimination in law and in culture.

Both the 1968 Kerner Commission report and the 50-year update by the Eisenhower Foundation say deepening racial division is not inevitable. ‘[The] alternative will require a commitment to national action,’ the original report said, ‘compassionate, massive and sustained, backed by the resources of the most powerful and the richest nation on this earth. From every American it will require new attitudes, new understanding, and, above all, new will.’

We see the righteous anger and courage of the millions of people demonstrating in the streets across all 50 states – people of all races, ethnicity, and ages – and we feel a spark of hope. We pray that this is the birth of the new will needed to transform ourselves and our society. Together we say his name – George Floyd! Black Lives Matter.”

In addition to the statement, the Maryknoll Office for Global Concerns helped organize two events for Catholics in the D.C. area in support of the Black Lives Matter movement. The first occurred on June 2, in response to President Trump’s visit to the Saint John Paul II Shrine in Washington D.C., one day after police and troops, using tear gas and shields, pushed demonstrators out of Lafayette Park so the president could pose for photos outside of  St. John’s Episcopal Church.

Susan Gunn, director of the Maryknoll Office for Global Concerns, helped organize the vigil across the street from the Catholic shrine on June 2. “Our Christian faith calls us to recognize the tremendous suffering of our brothers and sisters,” Gunn told the National Catholic Reporter. “I believe it's absolutely shameful that the Knights of Columbus is hosting the president at this time at the St. John Paul II National Shrine, our great pope, a man of peace.”

Gunn’s sentiments were echoed by Archbishop Wilton Gregory of Washington D.C., who said in a statement on June 2, “I find it baffling and reprehensible that any Catholic facility would allow itself to be so egregiously misused and manipulated in a fashion that violates our religious principles, which call us to defend the rights of all people, even those with whom we might disagree.”

In addition, the Maryknoll Office for Global Concerns helped organize a prayer service and march on June 8 at the Black Lives Matter Plaza for Catholics in the DC area. The prayer service was led by Black diocesan priests and was entitled, “Requiem for the Black Children of God.”

On June 25, the Maryknoll Affiliates hosted a webinar on “Courageous Conversations in Times of Pandemic and Polarization,” which gave some tips for the work of anti-racism. More resources on anti-racism work can be found at bit.ly/MOGCBLM.