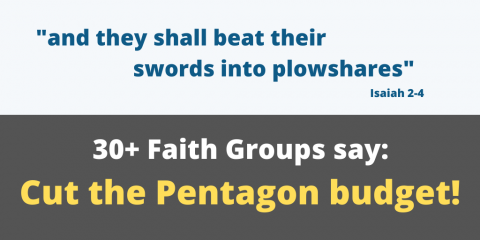 On December 9, the Maryknoll Office for Global Concerns joined 31 other faith-based organizations and 70 faith leaders in issuing the following open letter to all the 2020 presidential candidates urging them to call for significant cuts to the nation's military budget and for a renewed investment in domestic programs, diplomacy, and peacebuilding. This letter resulted in phone calls with the Elizabeth Warren and Andrew Yang campaigns to discuss how they could incorporate these concerns into their presidential campaign platforms. The following article was published in the March-April 2020 issue of NewsNotes.

As faith-based groups and local faith leaders, we see the challenges that our communities face up close. We also witness first-hand the growth and joy that can be nurtured through wise investments of our bountiful national resources. Our faith and daily experiences tell us that our nation does best when our taxpayer dollars are spent on proven interventions that help make our communities healthier, safer, and stronger—like educating children, caring for the sick, feeding the hungry, and building peace in communities torn by violence.
We are therefore deeply troubled by our federal budget’s increasingly distorted emphasis on spending to fight and equip for war, at the expense of investments in our communities at home and our pursuit of peace abroad. We call on you to reverse this harmful trend and reduce military spending, reinvesting our nation’s resources in our communities and peacebuilding instead.

We represent a diversity of faith teachings on the question of when—and whether—the organized violence of war is morally acceptable. Where our faiths all agree is that war must never be a first resort or a mindless preference. The immediate effect of war and military violence, even when pursued with the aim of protecting others or ending wrongs, is to wreck, wound, and cut short lives. Faith calls on us to build, heal, and nurture.

With the July 2019 budget agreement, Congress voted to spend over half of the discretionary federal budget on war and today’s military. With this decision, we see even more clearly how distorted our national priorities have become. Today the federal budget allocates over $2 billion each day—more than $1 million every minute—to spending on war, weapons, and the military. The budget agreement will increase spending on the military by at least $20 billion over last year; just that increase is more than double the entire annual budget of the Environmental Protection Agency, and fully one-third of last year’s total foreign aid and diplomacy budget.

While roughly 40 million people in the United States are not sure they can afford enough food for their family, Congress and the president have agreed to spend more than $70 billion of our nation’s resources on another year of fighting overseas wars. Salaries for the nation’s teachers have fallen by 4.5% over the past decade, yet our latest budget devotes another $9 billion for F-35 war planes. Veterans of our nation’s wars are dying of suicide and drug overdose at alarming rates, yet Congress is poised to spend well over a trillion dollars to refurbish a nuclear weapons arsenal for a type of war that Ronald Reagan once said “cannot be won and must never be fought.”

This misallocation of our tax dollars is a gross misrepresentation of our values. Our faith insists that spending ever more resources on the tools and threats of violence will not bring us true security. In order to be truly secure, our communities need a just peace built on the dignity and strength of education, healthcare, housing, nutrition, sustainable employment, and lasting conflict resolution. Instead, Congress has repeatedly put our tax dollars towards weapons and war—tools and actions that harm communities, rather than build them.

Over half a century ago, President Dwight D. Eisenhower reminded us of what our nation loses when it wastes its resources on the tools and business of war: "Every gun that is made, every warship launched, every rocket fired signifies, in the final sense, a theft from those who hunger and are not fed, those who are cold and are not clothed. This world in arms is not spending money alone. It is spending the sweat of its laborers, the genius of its scientists, the hopes of its children.”

Our faiths call on us to choose a better path today. Though varied in practice and theology, all of our various faith traditions call us to honor the sacred dignity of each person and to attend to the needs of society’s most vulnerable people both in the United States and abroad. It is immoral to spend excessively on the weapons and conduct of war, especially at the cost of food for the hungry, healthcare for the sick, education for our children, and prevention of and recovery from violent conflict.

We urge you to call for significant cuts to our nation’s military budget, for major reinvestments in our communities at home, and for a more peaceful approach to the world beyond.