Japan: A visit to Fukushima 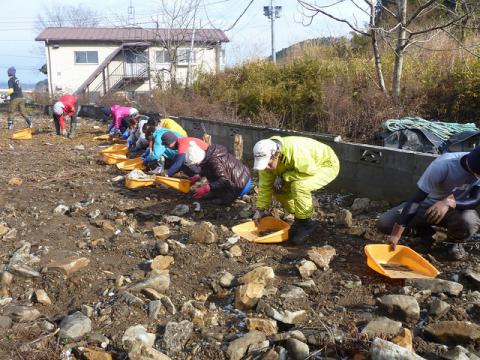 Last November, Maryknoll Sisters Janice McLaughlin and Jean Fallon traveled to Japan, where Sr. Jean lived and worked for many decades. While there, they visited the Tohoku area of northeastern Japan. This area is made up of four coastal prefectures affected by the March 2011 earthquake and tsunami: Aomori, Iwate, Miyagi and Fukushima. The following reflection is written by Sr. Jean.

While the other prefectures endured the double disasters of earthquake and tsunami, Fukushima Prefecture had three: earthquake, tsunami, and the added tragedy of irradiated coastal cities, villages and farm lands. Some are not anywhere near the destroyed nuclear facility, but are located in the mountains where the radiation plume, driven by winds and a snow fall, brought the more dangerous irradiated particles into the trees and onto the ground.

In December I responded to a Nuclear Information and Resource Service’s appeal; they were requesting that the U.S. Nuclear Regulatory Commission make GE nuclear energy generators safer.

I wrote, "Recently I have returned from Fukushima where we met and talked with those affected by the explosions of three of the Fukushima nuclear facilities’ reactors. We found among the people an underlying depression and even despair in the affected areas especially where you see farms, homes, and villages that are un-inhabitable.... What is worse is the false hope being held out by the government and TEPCO [Tokyo Electrical Power Company] to these people that they will be able to return sometime in the future." [The reason that only three reactors were involved was that three of the six in operation had been shut down. The coolant pools which stored depleted fuel rods from one of the plants emptied and began the meltdown syndrome.]

During our visit, we were told by teachers and parents that children in some of the most affected areas have not yet been removed from the very real danger of residual radiation, nor have their parents and neighbors... This is because the government "drew a line in the sand" a mere 20 kilometers from the facility. Now, these adults are also suffering from guilt. They told us: We were the ones who agreed to that nuclear energy plant and it is now too late, we cannot rectify our mistake. They repeatedly said to us: "If only radiation was visible!"

From the time the facility was built, activists – many of whom were scientists, professors and other professionals – had challenged the safety of the Fukushima facility. They had repeatedly warned TEPCO facility managers of this very kind of a disaster: What will you do if a very large earthquake would cause a tsunami that would pour over your sea wall and flood the buildings beyond their capacity to pump out the deluge of sea water…

It is beyond just a tsunami that cannot be stopped. The danger of nuclear facilities is not the machinery that runs them but the people who do, especially those who make decisions about the safety and future of these facilities. We allow energy corporations and companies like General Electric to lead us to believe that nuclear energy can be safe if we but change the generators, or have better emergency protocols.

It is the industry that is keeping these time bombs running, not the need for electricity. If Japan and the U.S. were to focus on developing alternative energy production our scientific know-how could open up practical methods of safe energy production.

If it is true that this is the blind attempt to make money at any cost and the refusal to change what can be changed, then it is time to open the way to something new. But, it will not be without cost or pain.

We can start with a change of focus which must be on human life and the life of the planet. We can begin to question our energy needs. There are possibilities of clean energy but we need political commitment and unified efforts to make the necessary changes.

It is time we cease trying to salvage what has been one of the biggest mistakes humankind has made. (See related story here.)

Photo of volunteers cleaning the area in Minamisanrikucho (Miyagi prefecture) by Hajime Nakano.