Israel/Palestine: Settlements are obstacles to peace 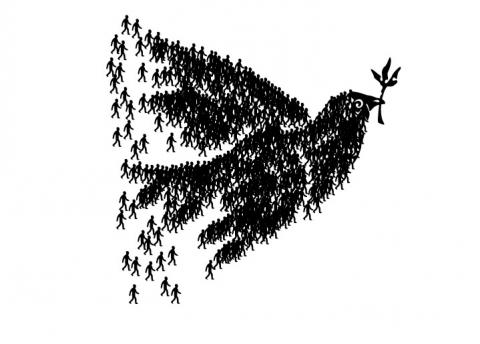 The United Nations Security Council recently held a special meeting to discuss Israeli settlements in the West Bank and East Jerusalem. The following article was published in the November-December 2016 issue of NewsNotes.

On October 14, the United Nations Security Council held a special session entitled "Illegal Israeli Settlements: Obstacles to Peace and the Two-State Solution."  The countries of Malaysia, Venezuela, Egypt, Angola, and Senegal requested the meeting using the Arria Formula clause which allows Security Council members to call for debates on subjects of specific interest.

Even though attendance is not mandatory and no vote is taken at this kind of meeting, all fifteen members of the Security Council were present. The impetus for this “informal” meeting as outlined in the concept note was that “[t]he viability of the two-State solution to the Israeli-Palestinian conflict and the prospects for realizing it are being seriously jeopardized by the presence and continuing growth of illegal Israeli settlements on Palestinian land occupied by Israel since June 1967.”

Each representative named the Israeli settlements as an “obstacle to peace” and called for Israel to stop expansion immediately.

Two organizations working for peace between Israel and Palestine were invited to present – notably, both with very strong ties to Israel. Lara Friedman of Americans for Peace Now began her remarks by sharing that she is “someone who proudly and unapologetically cares about Israel and defends its existence.” Nevertheless, she went on to charge that settlements are not only tolerated by the government of Israel but “actively encouraged.”

Friedman explained that settlers in the West Bank live under Israeli law while Palestinians are subject to military law, resulting in “a dangerous and ugly political reality…Two populations live on the same land, under different legal systems, separate and entirely unequal, with the governing authority serving one population at the expense of the other.” She concluded that “these policies reflect a deliberate strategy designed to prevent the emergence of a viable, contiguous Palestinian state.”

Hagai El-Ad of B’Tselem, spoke next.  B’Tselem  is an Israeli organization working to build support for peace with Palestine among Israeli civil society. El-Ad, an Israeli citizen, lamented that throughout his entire life his country has occupied Palestine. He openly accused Israel of “putting off” the peace process in order to buy time to expand the settlements, and “changing the facts on the ground” with the intent of affecting the outcome. He concluded by addressing his country directly: “You cannot occupy a people for fifty years and call yourself a democracy.” Next year will mark the 50th year of occupation.

International law expert Professor Francois Dubuisson also spoke of his work as representative of Palestine before the International Court of Justice when that court considered the legal implications of the Separation Wall. Dubuisson reminded his audience of the laws which Israel is breaking and of the responsibility of the member states to not only verbally condemn violations, but also actively defend those laws. Since the settlements are illegal, he reasoned, the UN member states should collectively adopt boycott, divestment and sanction (BDS) measures against products produced in West Bank settlements, Israeli companies operating in the West Bank, and foreign entities with links to those companies. He compared the system of control Israel has created to apartheid and suggested that UN sanctions against Israel could be as effective as those used against South Africa. “We should be inspired by that precedent,” Dubuisson said.

In response to these discouraging facts and bleak predictions, each Security Council member responded with a statement regarding their country’s position – all in agreement that settlement construction must stop immediately. Ambassador Rafael Ramirez of Venezuela was particularly forceful in his words, stating that the ongoing presence of Israel in Palestine “should bring shame to the Security Council” which has allowed the United States to “maintain a permanent blockage” on this issue.

Remarks by U.S. Deputy Ambassador David Pressman echoed the others’ condemnation of the settlements and described recent statements by the Obama administration as “particularly strong” in their opposition to new construction. But while words may have gotten stronger, actions have not yet followed. Ambassadors Ramirez and others in attendance named the U.S. as the obstacle to peace. If not for the U.S. blocking resolutions against Israel in the Security Council, they could have taken action long ago. Some speculate that with President Obama’s time in office rapidly approaching its end, he may choose to leave a legacy mark at this table – one can only hope.

Faith in action: Click here to ask Congress to work to end Israel's demolition of Palestinian homes to make way for Israeli settlements.