Israel/Palestine: The question of Jerusalem 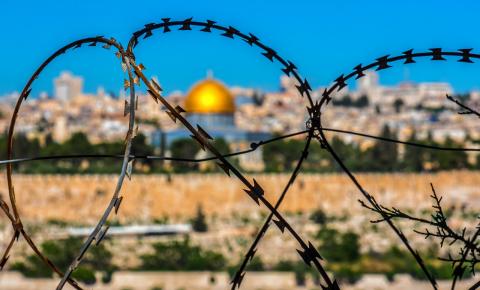 The Maryknoll Office for Global Concerns released a statement on December 7 opposing the Trump administration’s decision to recognize Jerusalem as the capital of Israel and to move the U.S. embassy to Jerusalem. The following article was published in the January-February 2018 issue of NewsNotes.

Just as Pope Francis said “I cannot remain silent” about his deep concern about the United States’ decision, we, too cannot remain silent. The Maryknoll Office for Global Concerns repeats the pope’s appeal to those in power to respect “the status quo of the city, in accordance with the relevant resolutions of the United Nations.”

“The United States’ decision will further entrench Israel’s illegal occupation of East Jerusalem and the human rights violations that the Palestinian people suffer daily,” said Gerry Lee, director of the Maryknoll Office for Global Concerns. “This decision will only foster more hatred, conflict, violence and suffering in Jerusalem and throughout the Middle East.”

Fifteen U.S. churches and Christian organizations, including the Maryknoll Office for Global Concerns, reiterated their call for peace, justice, and equality in Israel/Palestine in a letter to Members of Congress that included a paper they sent Congress and to President Trump and his Administration earlier this year in which state: “The Administration’s decision upends nearly 70 years of U.S. policy of neutrality on the issue of sovereignty over Jerusalem, putting the U.S. squarely on one side and disregarding the rights, needs, and aspirations of the Palestinian people.” The letter concludes with an invitation to President Trump to “walk with us in hope as we build a just, inclusive peace for all the peoples of this unique and Holy City.”

Jerusalem is a place of pilgrimage for Christians from all around the world, yet Christians who live just next door to the city must get permits to worship there and may be denied entry altogether. Jerusalem is home to over 800,000 residents, 62 percent of whom are Jewish, 35 percent Muslim, and about two percent Christian. Israel claims all of Jerusalem as its capital, having unilaterally annexed the eastern portions of the city following the 1967 war in a move not recognized by the international community, which included the United States — until now.

Housing is one of the key areas in which Palestinians in Jerusalem face discrimination. It is nearly impossible for Palestinians to get building permits from the Israeli authorities, and when they build without a permit, their homes and other structures face the very real threat of demolition. Even as Palestinian homes are destroyed and their residents displaced, building continues in the illegal Jewish settlements in East Jerusalem. Palestinians are also subject to having their residency rights in East Jerusalem revoked, due to discriminatory laws and practices of the Israeli government.

Palestinians’ right to education in Jerusalem is also compromised by the Israeli occupation. The Separation Wall delays or prevents students from getting to school and the permit system can result in West Bank teachers not being able to reach Jerusalem schools.

The restrictions on movement which affect education also affect Palestinians’ access to sites of worship. For Palestinians living in the occupied territories, getting to and from Jerusalem means navigating an obstacle course of checkpoints, permits, intermittent closures, and the separation barrier. Even for Palestinian residents of Jerusalem, celebrating religious holidays can be a challenge.

To achieve lasting peace, the occupation of East Jerusalem must end and the status of Jerusalem and its boundaries must be determined by a peace agreement between Israeli and Palestinians. The United States’ decision to turn a blind eye to these serious concerns and recognize Jerusalem as the capital of Israel can only foment violence and endanger lives.

The Maryknoll Office for Global Concerns urges the U.S. Congress to denounce the Trump administration’s decision and to deny funding the move of the U.S. embassy from Tel Aviv to Jerusalem.

Faith in action:
Send this message to your members of the U.S. Congress by using our action alert. http://bit.ly/2BmZu6C
Receive our latest updates on this issue by subscribing to Middle East Notes. http://bit.ly/2kFTCz7